Four Families of the Fallen

Four Families of the Fallen was a special 2018 pop-up community theatre performance project created and performed by Quick Fix Theatre, with support from the RC Sherriff Trust, to mark the centenary of the end of the First World War.

The performance was a collection of four original short plays about untold stories from the Home Front in 1918. The project was inspired by the commemorative wooden Roll of Honour in St James’ Church Weybridge, Surrey, UK and a July 1918 news article in the Surrey Advertiser about a remembrance service at St James’ Church.

The play tells the story of four families from Weybridge whose lives were all changed forever when a loved one died during the First World War. Each dramatisation gives audiences a unique glimpse into the realities for each of the four families as they come to term with their loss and the impact of the war.

In 2020, to accompany the four plays, Quick Fix created a 3D immersive experience which includes 3D models, soundscapes, 360/VR images and 360 photographs of the cast, to enable viewers to delve into the historical research in more detail.

Read more to discover the stories of the four individuals whose lives were cut short by the First World War and explore the immersive experience for yourself.

Published:
8 February 2021 See next post: The Effective Collections Project is back! See previous post: A Summer of Virtual Learning

Find out more about the Fallen

Military service history: George enlisted for the Royal Navy in May 1911 for 12 years service as a Second Class Stoker. This was a physically demanding role involving shovelling coal into the boilers of the vessels. The following year, for good conduct, he was promoted to the First Class Stoker and received a small pay increase.

In February 1914 he was transferred from HMS Dido and, after a short stint on shore, he joined the crew of HMS Hawke. On board, he served as a First Class Stoker in the ship’s main boiler room. On 15 October 1914, while receiving mail from another ship, HMS Hawke was sunk by a torpedo fired from a German submarine.

Military service history: Frank conscripted to the British Army 10th Battalion of the 3rd Queen’s Own Royal West Kent Regiment on 29 May 1916. He completed Basic Training at Aldershot in September then his fellow solders were loaded on to three trains bound for Southampton. At Southampton they caught a ship to Le Havre and despatched to the Somme.

The 10th Ballation fought in the Battle of Flers-Courcelette from 15-22 September. During this time, Frank Knapp was reported as missing, but his body was never found.

Military service history: Joined the 8th Battalion of the East Surrey Regiment (later attached to the 11th Battalion). Fought in the Battle of Chisery on 3 May 1917 near Arras.

During the battle he went missing on the battlefield. At the end of May 1917 he was confirmed Killed in Action.

As well as being commemorated in Weybridge, 2nd Lt Harold Vernon is commemorated on the official Arras memorial.

Military service history: At the outbreak of the war, Howard Willis worked at the Admiralty in Whitehall. In August 1917 however, he was selected from more than 6000 applicants to complete pilot training with the Royal Naval Air Service.

As a Probationary Flying Officer, he attended ground school at Crystal Palace before being deployed to Vendome, France and then to Cranwell, Lincolnshire.

On 13 January, while conducting a photo-reconnaissance mission from Dunkirk, Willis’ plane crashed. He suffered severe burns and died two days later in a French hospital.

Behind the scenes photographs

Browse a selection of action shots from the Four Families dress rehearsal at Riverhouse Barn.

Turn the pages to find out more about each of the four plays. 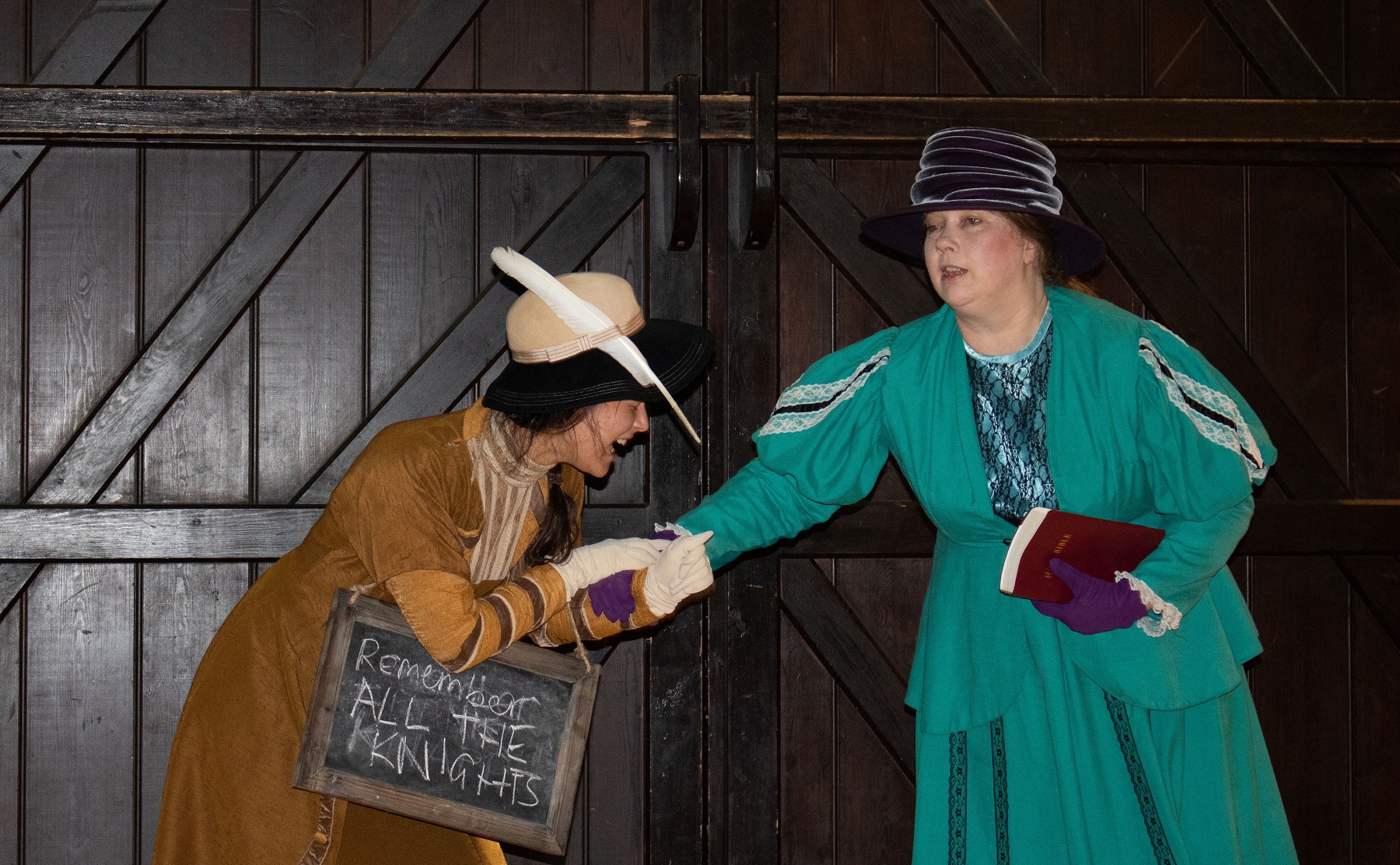 In the hours before the remembrance service at St James’ Church, the birth mother of an adopted sailor, who was killed in  the opening months of the war, is reunited with the woman who took custody of her son more than 25 years earlier, as part of a surprise plot by the sailor’s younger step-sister, who was eager to fulfil his last request.

Watch the full performance below. 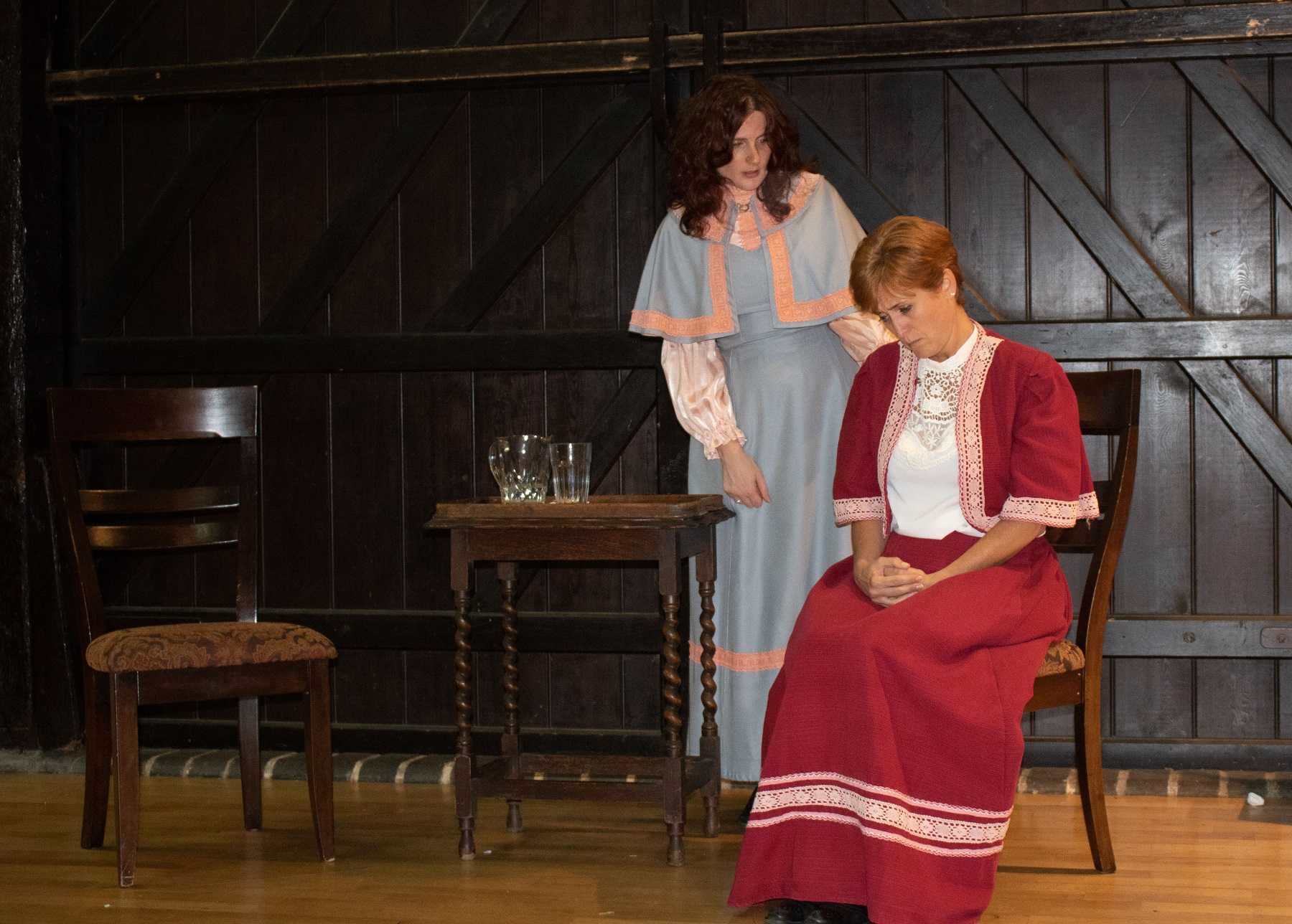 Play Two: Lest We Forget

A war widow and bereaved mother of two, clashes with the parish vicar and her two well-meaning younger sisters when her goal of protesting about her husband being left off the roll of honour threatens to unravel the arrangements they’ve made to help her rebuild her life. 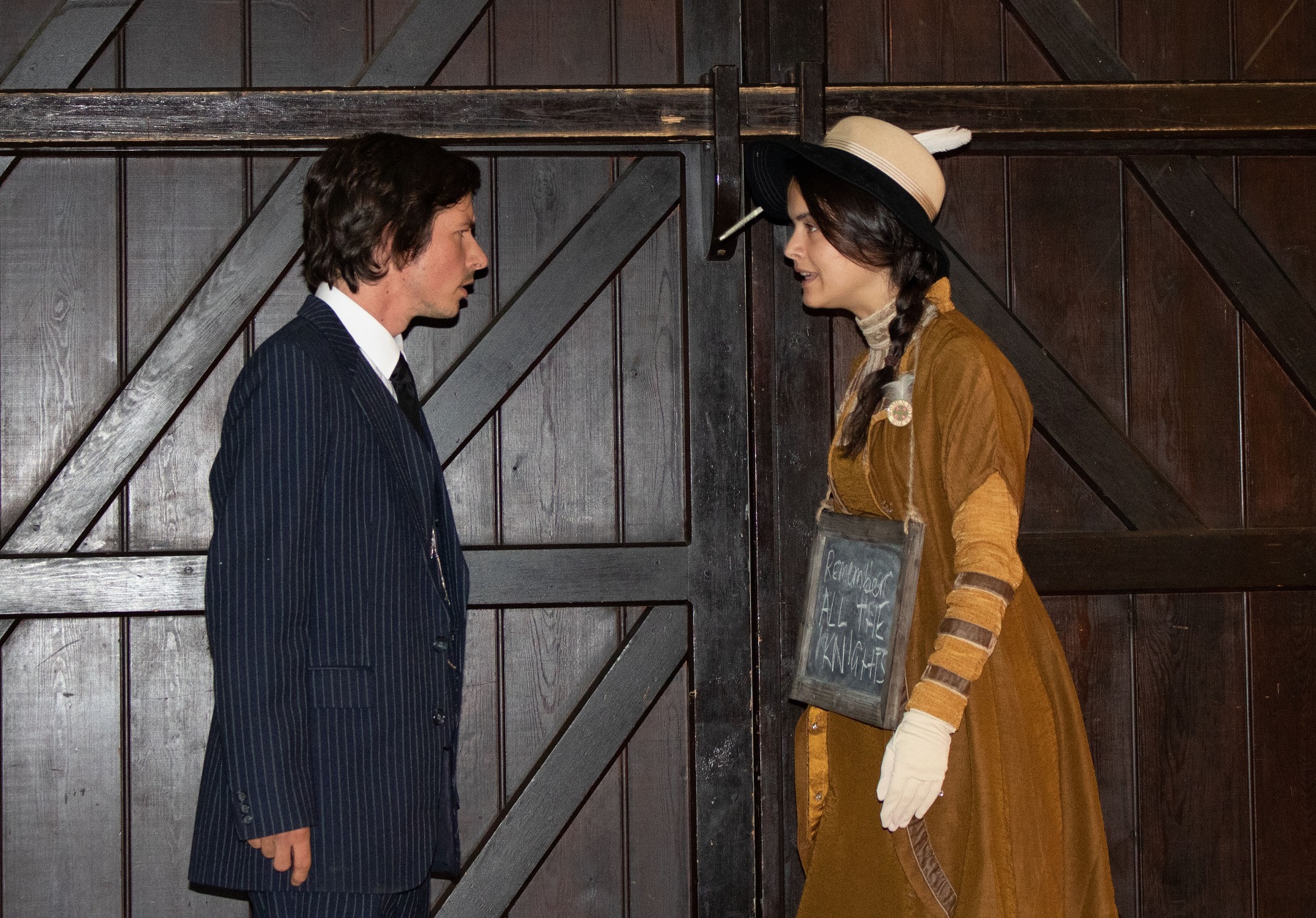 A highly-regarded former schoolmistress, widow to a former community stalwart and mother of a soldier killed in France in 1917, threatens to send shockwaves through the local community by boycotting the St James’ Church memorial service after she begins to question the role of the church in supporting the war that led to her son’s death. 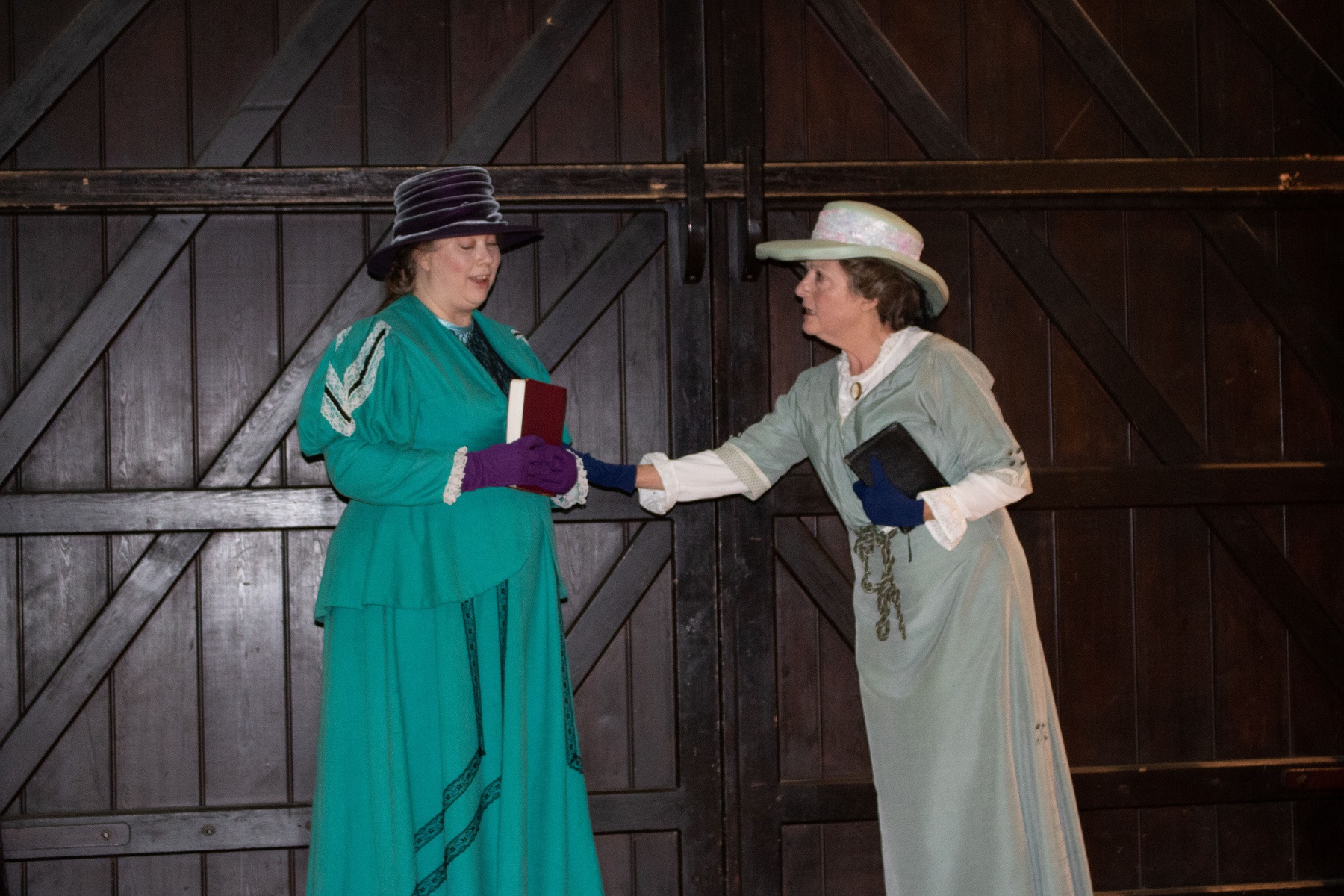 Parents of a rookie pilot, who was killed when his plane crashed in 1918, are forced to question their own actions when they encounter a member of the White Feather Brigade whom they hold responsible for encouraging their son to give up his office job for a deadly frontline assignment that jeopardised the family’s fortune and future. 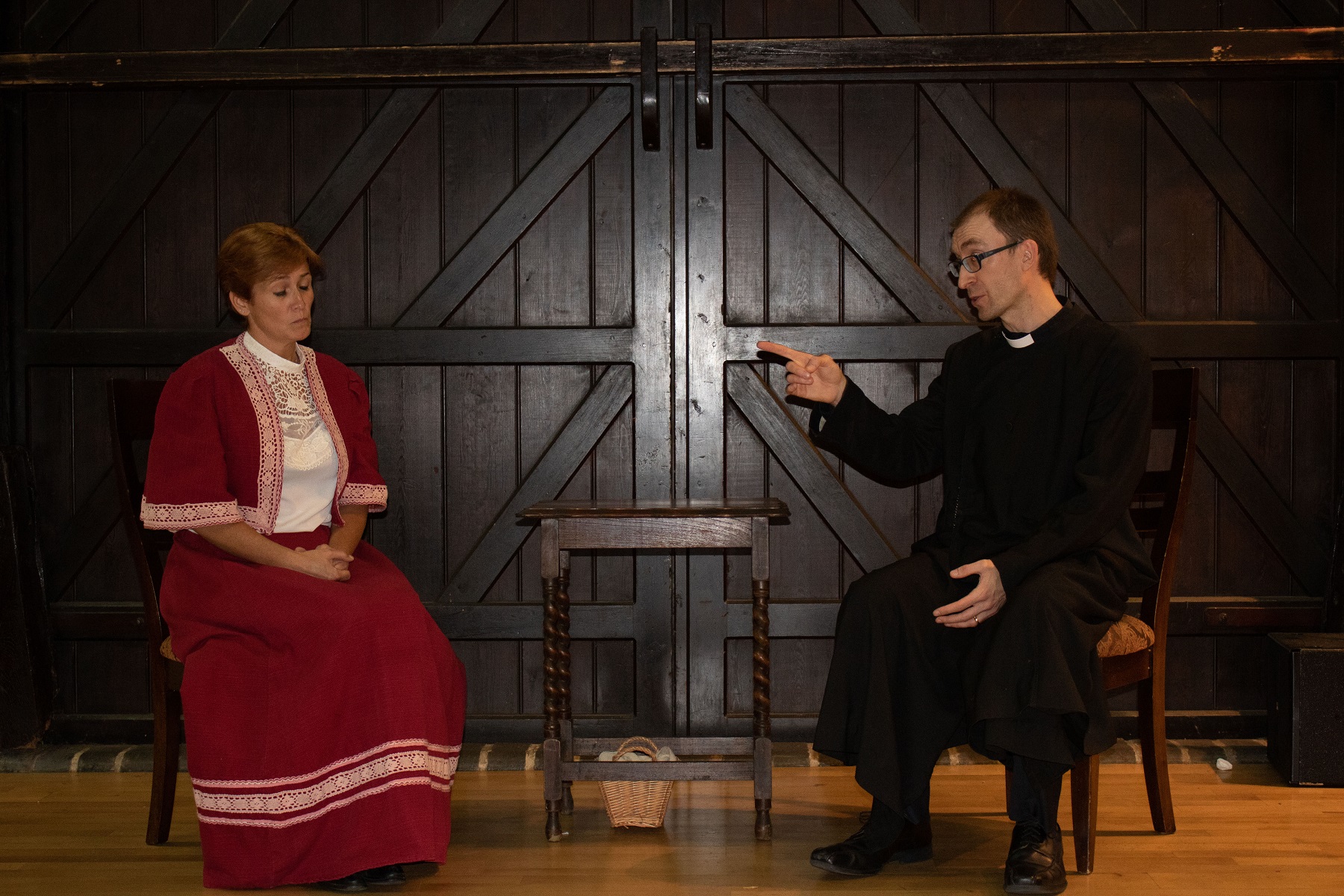 In the hours before the remembrance service at St James’ Church, the birth mother of an adopted sailor, who was killed in  the opening months of the war, is reunited with the woman who took custody of her son more than 25 years earlier, as part of a surprise plot by the sailor’s younger step-sister, who was eager to fulfil his last request.

You can find links to the other plays below.

Behind the scenes of the 3D experience

Scroll to preview the immersive experience which you can enter using the link below.

Dive deeper into the backgrounds of key characters and hear stories about real-life Weybridge residents from the Great War, inspired by actual newspaper reports.

Reverend Buller was the vicar of St James' Church Weybridge and a man with a fascinating past and some strong opinions. Get up close to a 3D model of Rev. Buller and hear more about his story.

Use the arrow keys on your keyboard to navigate your way round the space.

When you enter you can read more about the fallen men and their families and explore original sources from the archive including newspaper cuttings and photographs.

You will also encounter 3D models, soundscapes and 360/VR imagery which have been brought to life with audio extracts from the performance.

Quick Fix Theatre are a group of volunteer actors who specialise in devising and giving innovative pop-up theatre and digital performances inspired by the history of the borough of Elmbridge.

If you would like to get involved, find out more about their current projects, or feedback on the Four Families experience, please get in touch!

Watch Play Two: Lest We Forget Watch Play Three: The White Feather Watch Play Four: Revelations Discover the history of St James' Church, Weybridge, which inspired the Four Families project Explore the Surrey Heritage project 'Surrey in the Great War - A County Remembers' Explore the Elmbridge Museum exhibition 'Elmbridge At War: The Blitz in our Borough'
We use cookies on our website to provide you with a better experience. See our privacy policy for further information. OK