The story behind the exhibition

The 16th October 2020 was a very special day for pupils and teachers at Royal Kent Primary School as it marked 200 years since the founding of their school. Teachers organised a week of activities to celebrate this momentous day, including a series of online workshops delivered by Elmbridge Museum. 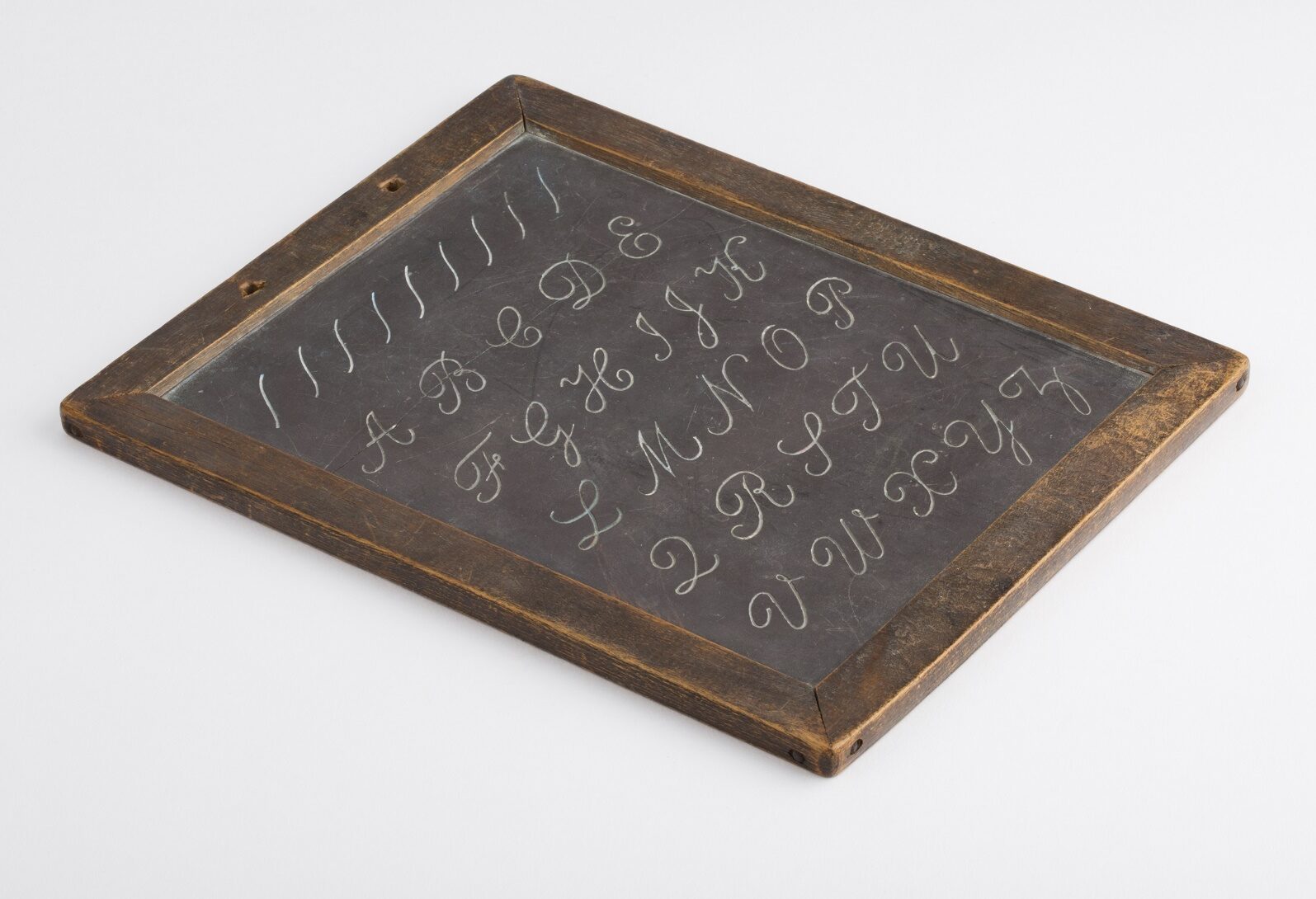 Inspired by what they learnt, students have created a fantastic array of work to be included in an online exhibition. Below you will find diary entries, poems, newspaper articles and even predictions about what the school will be like in the future!

This photograph shows the original site of the school, at the corner of Warren Lane and Bird's Hill Rise.

An early copy of the school's book of 'Rules and Punishments', carefully recorded by Edward, presents a rather grim picture of the experience for students at Royal Kent in the 1800s. Students had to follow a strict set of rules, as you will discover in Chloe and Thomas' diaries where even a small mistake, like getting a question wrong in class, can have very serious consequences. The school environment is in stark contrast to today, with Julia writing in her diary that there are no colours or posters allowed in the classroom and that children couldn't go home until 5pm! If all else fails, blame the parents, as Olivia was forced to do when her mother made her late for school resulting in a very angry teacher. It all worked out in the end though with mother dishing out tomato soup and lemon sherbet to atone for her mistake. Some things never change! 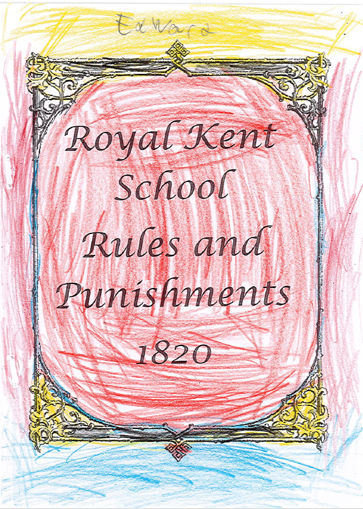 1. Children must not use their left hand.

2. Children must listen to the teacher at all times.

3. Children must arrive on time at 9 o’clock.

4. Children must always be polite to the teacher.

5. Children must do what the teacher commands them to.

6. Children must always do neat writing.

1. If children are naughty they will be caned.

2. If children do bad work they will wear the dunce’s hat.

3. If children are chatting they will have to write 100 lines. 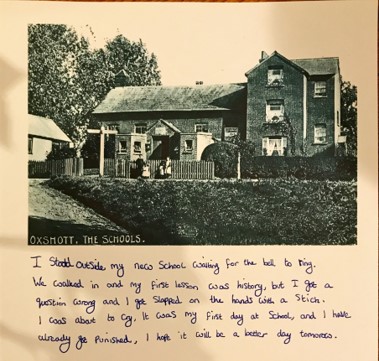 I stood outside my new school waiting for the bell to ring. We walked in and my first lesson was history, but I got a questions wrong and I got slapped on the hands with a stick. I was about to cry. It was my first day at school, and I have already got punished, I hope it will be a better day tomorrow. 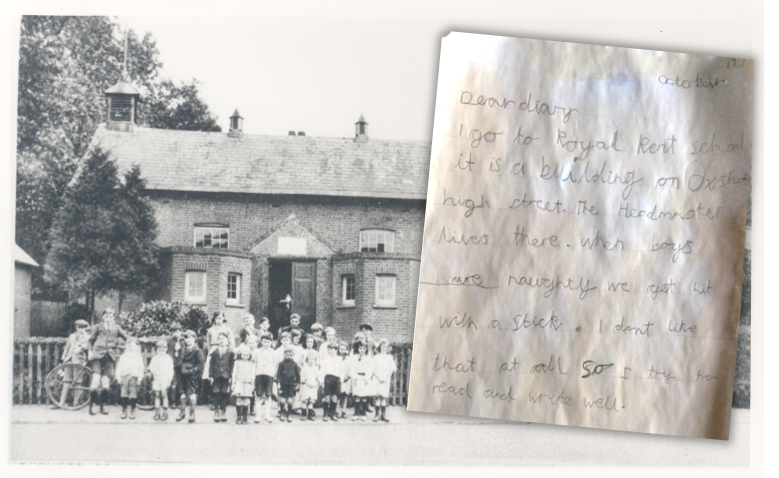 I go to Royal Kent school it is a building on Oxshott high street. The Headmaster lives there. When boys are naughty we get hit with a stick. I don’t like that at all so I try to read and write well. 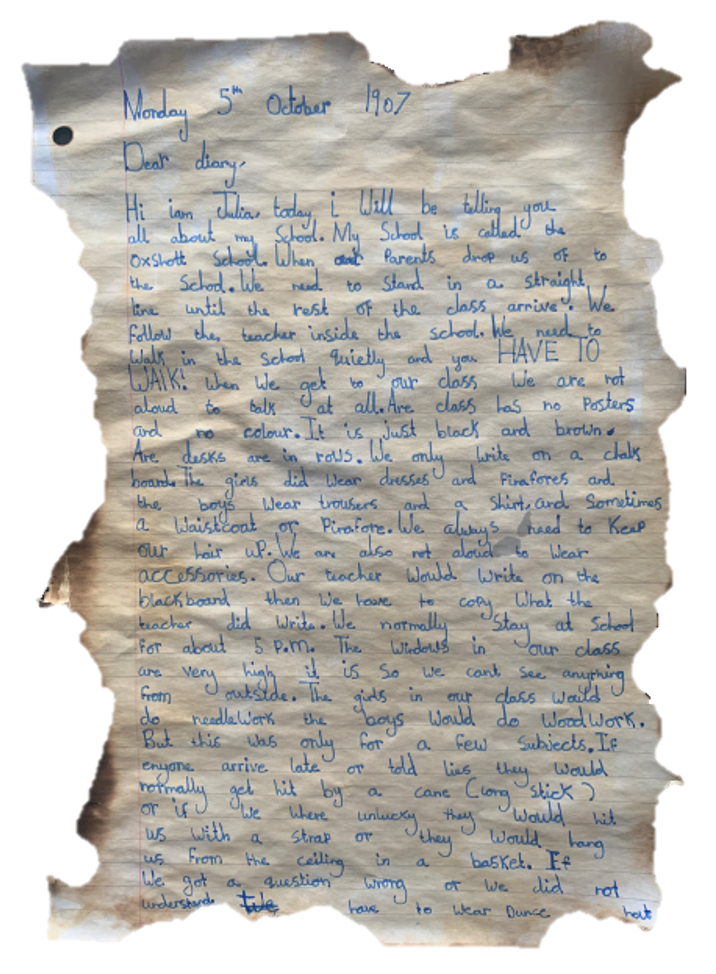 Dear diary,
Hi I am Julia today I will be telling you all about my school. My school is called the Oxshott School. When our parents drop us off to the school. We need to stand in a straight line until the rest of the class arrive. We follow the teacher inside the school. We need  to walk in the school quietly and you HAVE TO WALK! When we get to our class we are not allowed to talk at all. Our class has no posters and no colour. It is just black and brown. Our desks are in rows. We only write on a chalk board. The girls did wear dresses and pinafores and the boys wear trousers and a shirt and sometimes 2 waistcoats or pinafore. We always need to keep our hair up. We are also not allowed to wear accessories. Our teacher would write on the blackboard then we have to copy what the teacher did write. We normally stay at school for about 5pm. The girls in our class would do needlework the boys would do woodwork. But this was only for a few subjects. If anyone arrive late or told lies they would normally get hit by a cane (long stick) or if we were unlucky they would hit us with a strap or they would hang us from the ceiling in a basket. If we got a question wrong or we did not understand we have to wear dunce hat. 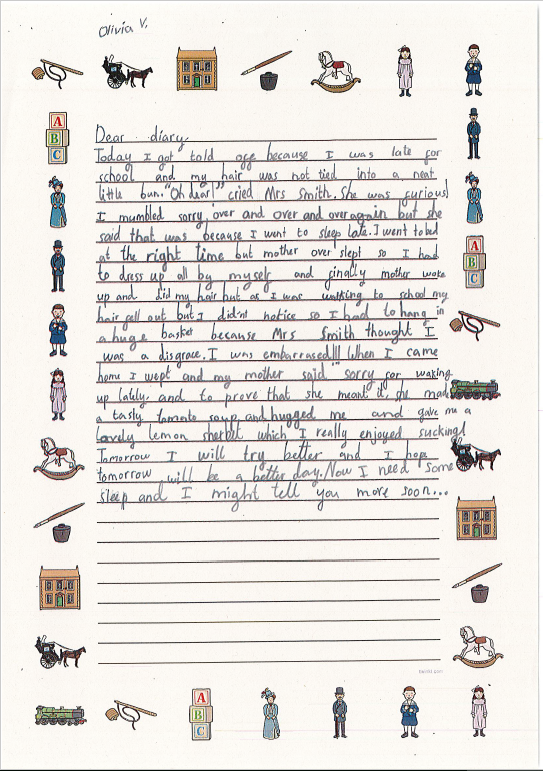 Today I got told off because I was late for school and my hair was not tied into a neat little bun. “Oh dear!” cried Mrs Smith. She was furious! I mumbled sorry over and over and over again but she said that was because I went to sleep late. I went to bed at the right time but mother over slept so I had to dress up all by myself and finally mother woke up and did my hair but as I was walking to school my hair fell out but I didn’t notice so I had to hang in a huge basket because Mrs Smith thought I was a disgrace. I was embarrassed!!! When I came home I wept and my mother said sorry for waking up lately and to prove that she meant it, she made a tasty tomato soup and hugged me and gave me a lovely lemon sherbet which I really enjoyed sucking. Tomorrow I will try better and I hope tomorrow will be a better day. Now I need some sleep and I might tell you more soon…

This fantastic drawing wishing Royal Kent a happy 200th birthday was created by Poppy in Reception!

Showing early promise for a career in journalism, Chloe and Ischia created newspaper articles to mark the occasion. Contrasting the changes in the curriculum, the articles celebrate the discovery that Royal Kent is one of the oldest primary schools in the country. Ischia's article in the Oxshott News, priced at 3 shillings for this rare edition dated 7th October 1818, sheds a light on the school's founding connection to the Royal Family! Chloe reports that the 200th anniversary celebrations had to be altered due to the pandemic, however an interview with a current student reveals that pupils have thoroughly enjoyed learning about the history of the school through a Zoom workshop led by Elmbridge Museum. 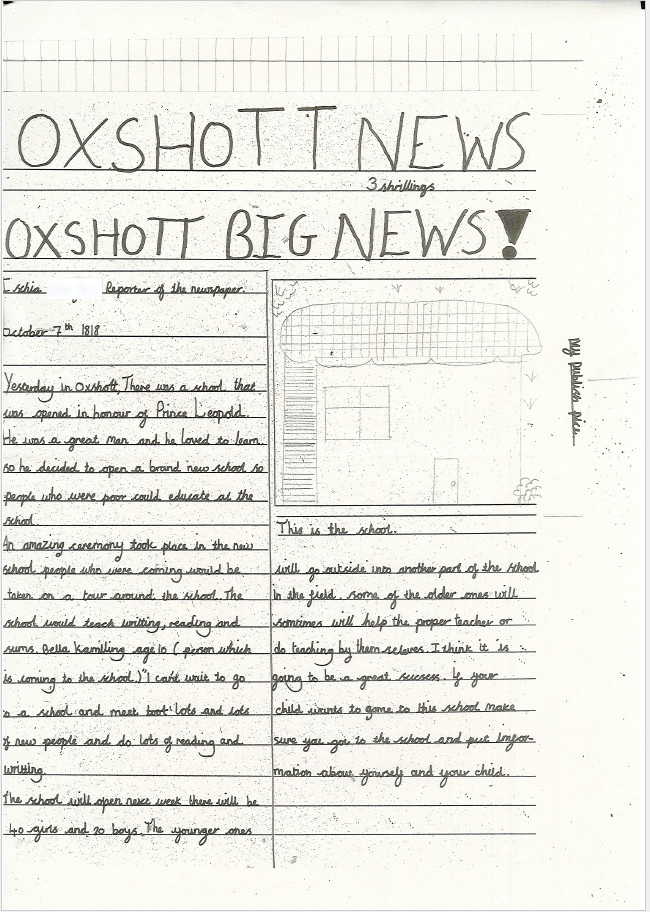 Yesterday in Oxshott, there was a school that was opened in honour of Prince Leopold. He was a great man and he loved to learn so he decided to open a brand new school so people who were poor could educate at the school.

An amazing ceremony took place in the new school. People who were coming would be taken on a tour around the school. The school would teach writing, reading and sums. Bella, age 10 (person which is coming to the school) “I can’t wait to go to a school and meet lots of new people and do lots of reading and writing.”

The school will open next week there will be 40 girls and 20 boys. The younger ones will go outside into another part of the school in the field. Some of the older ones will sometimes help the proper teacher or do teaching themselves. I think it is going to be a great success. If your child wants to come to this school make sure you come to the school and put information about yourself and your child. 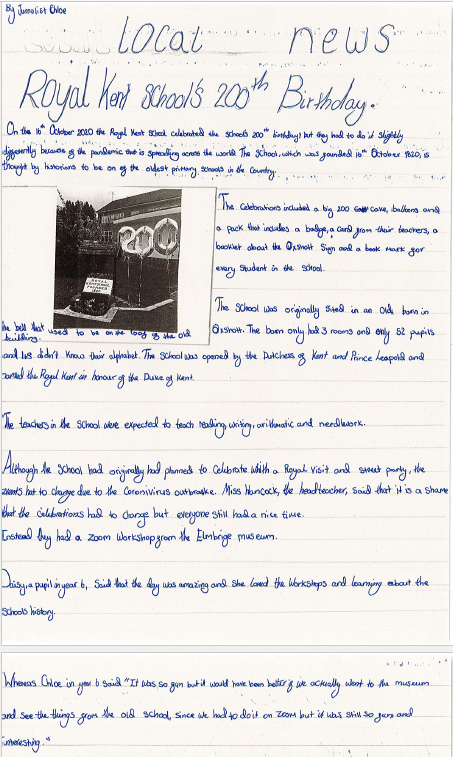 On the 16th October 2020 the Royal Kent School celebrated the school’s 200th birthday, but they had to do it slightly differently because of the pandemic that is spreading across the world. The school, which was founded on 16th October 2020 is thought by historians to be one of the oldest primary schools in the country.

The celebrations included a big 200 cake, balloons and a pack that includes a badge, a card from their teachers, a booklet about the Oxshott sign and a book mark for every student in the school.

The school was originally held in an old barn in Oxshott. The barn only had 3 rooms and only 52 pupils and 48 didn’t know their alphabet. The school was opened by the Duchess of Kent and Prince Leopold and named the Royal Kent in honour of the Duke of Kent.

The teachers in the school were expected to teach reading, writing, arithmetic and needlework.

Although the school had originally had planned to celebrate with a Royal visit and street party, the plans had to change due to the coronavirus outbreak. Miss Hancock, the headteacher, said that it is a shame that the celebrations had to change but everyone still had a nice time.

Instead they had a zoom workshop from the Elmbridge Museum.

Daisy, a pupil in year 6, said that the day was amazing and she loved the workshops and learning about the schools history.

Whereas Chloe in year 6 said, “It was so fun but it would have been better if we actually went to the museum and see the things from the old school, since we had to do it on zoom but is was still so fun and interesting.”

Royal Kent past, present... and future

A lot has changed over the last two hundred years, and the Royal Kent School is no exception. Darcy's poem shows how the school has been transformed, moving from a small barn on Bird's Hill Farm to its specially designed modern home complete with its own MUGA! Sophia brilliantly explores the changes in the student experience, considering things such as school uniform, teaching style and even the lack of central heating in the old school building. 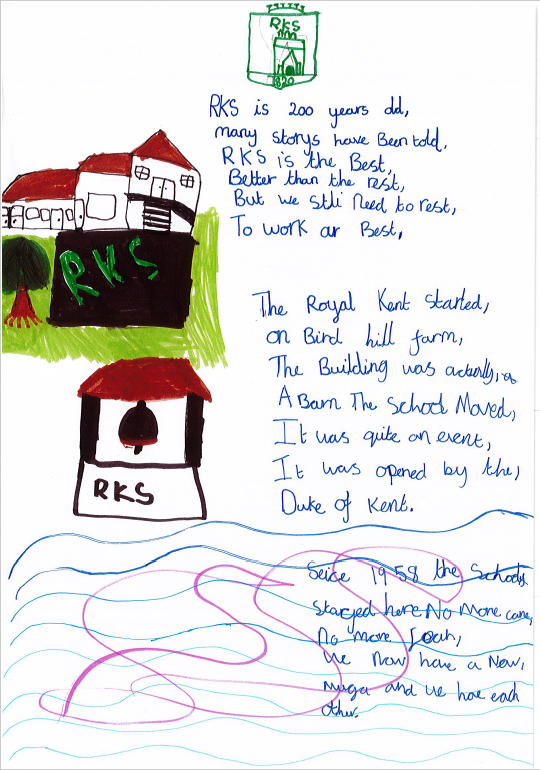 many stories have been told.

RKS is the best,

better than the rest,

But we still need to rest,

To work our best.

The building was actually,

A barn. The school moved,

It was quite an event,

It was opened by the Duke of Kent.

We now have a new

MUGA and we have each other. 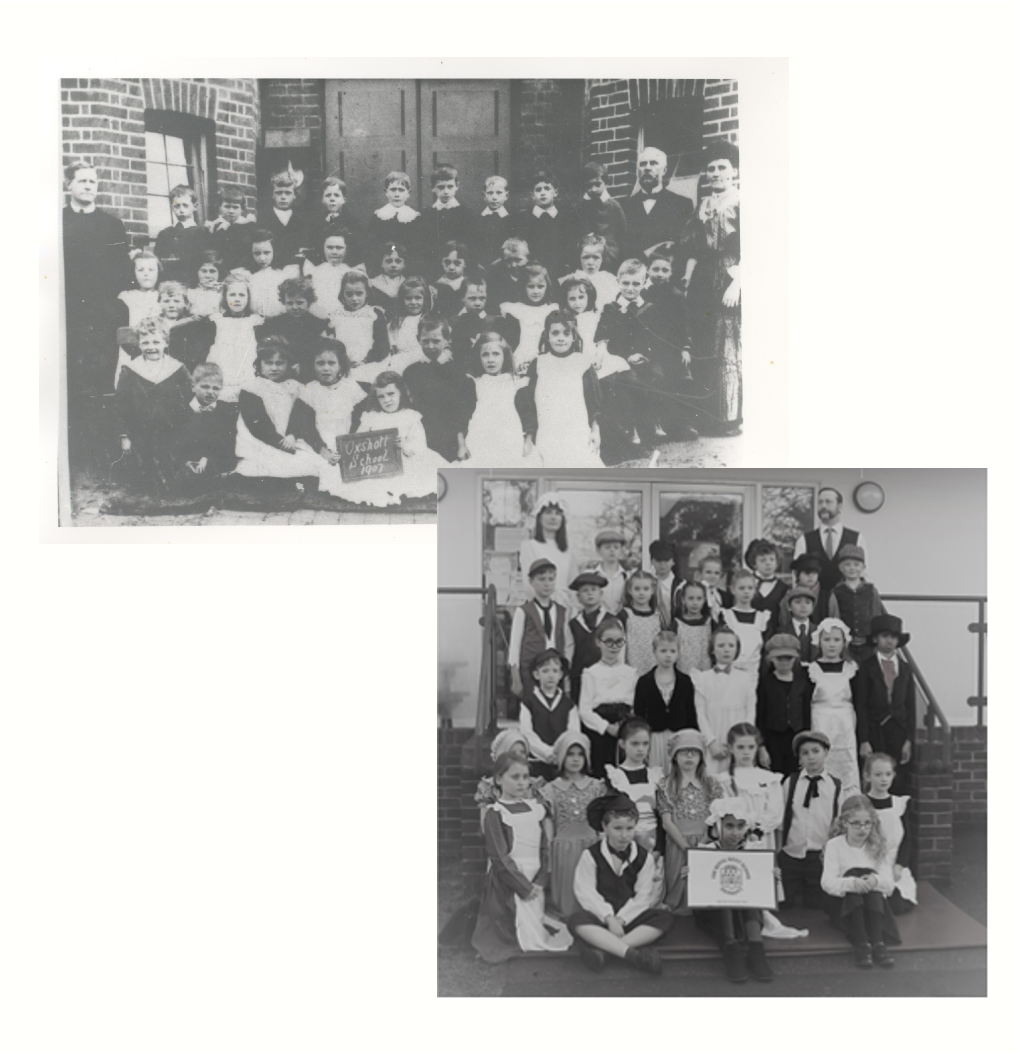 There are many differences in the way RKS was like 200 years ago.

The children’s uniforms were different to what it is like now.

We have been separated into different classes according to our age but in the olden days only the older children could go in 1 class and  younger go in another.

Nowadays we have one teacher in every class but in the olden days they had only  3 teachers and 1 was the Headteacher.

In these days we heat our classrooms with a radiator whereas 200 years ago the building was heated by a stove.

Meanwhile Bella, Henry, Alice and Daisy deliver a taste of the Royal Kent school of the future. One popular theme is the presence of school pets including a dog, cat, rabbit, guinea pigs and even a mouse. With some slick new branding and the development of a suite of new sports facilities including a swimming pool, the students at Royal Kent are embracing a futuristic vision for their school that includes robot teachers and assemblies conducted over Zoom.

Bella's hopes for her school of the future

For each class to have pets such as guinea pigs, rabbits and hamsters

To have a medium size swimming pool

To have tennis and netball courts

For the school to have a cute dog to share

For everyone to have a birthday party when its their birthday 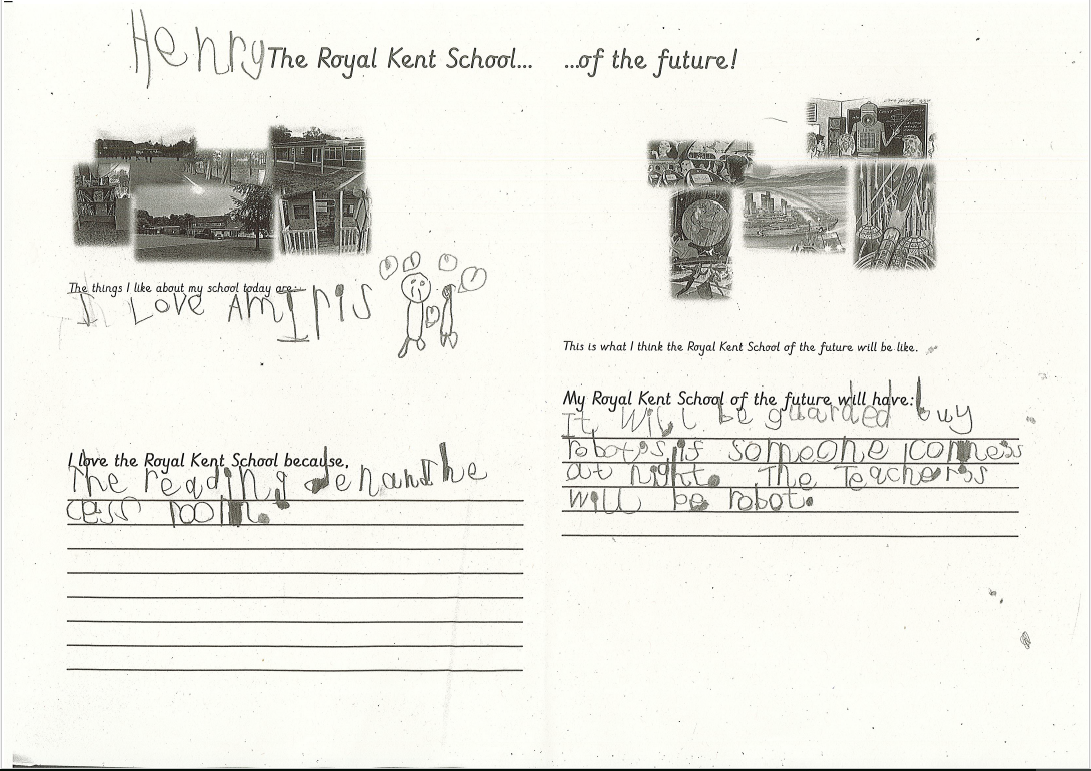 The things I like about my school today are…

I love the Royal Kent School because…

The reading den and the class room,

My Royal Kent School of the Future will have…

It will be guarded by robots if someone comes at night. The teachers will be robots. 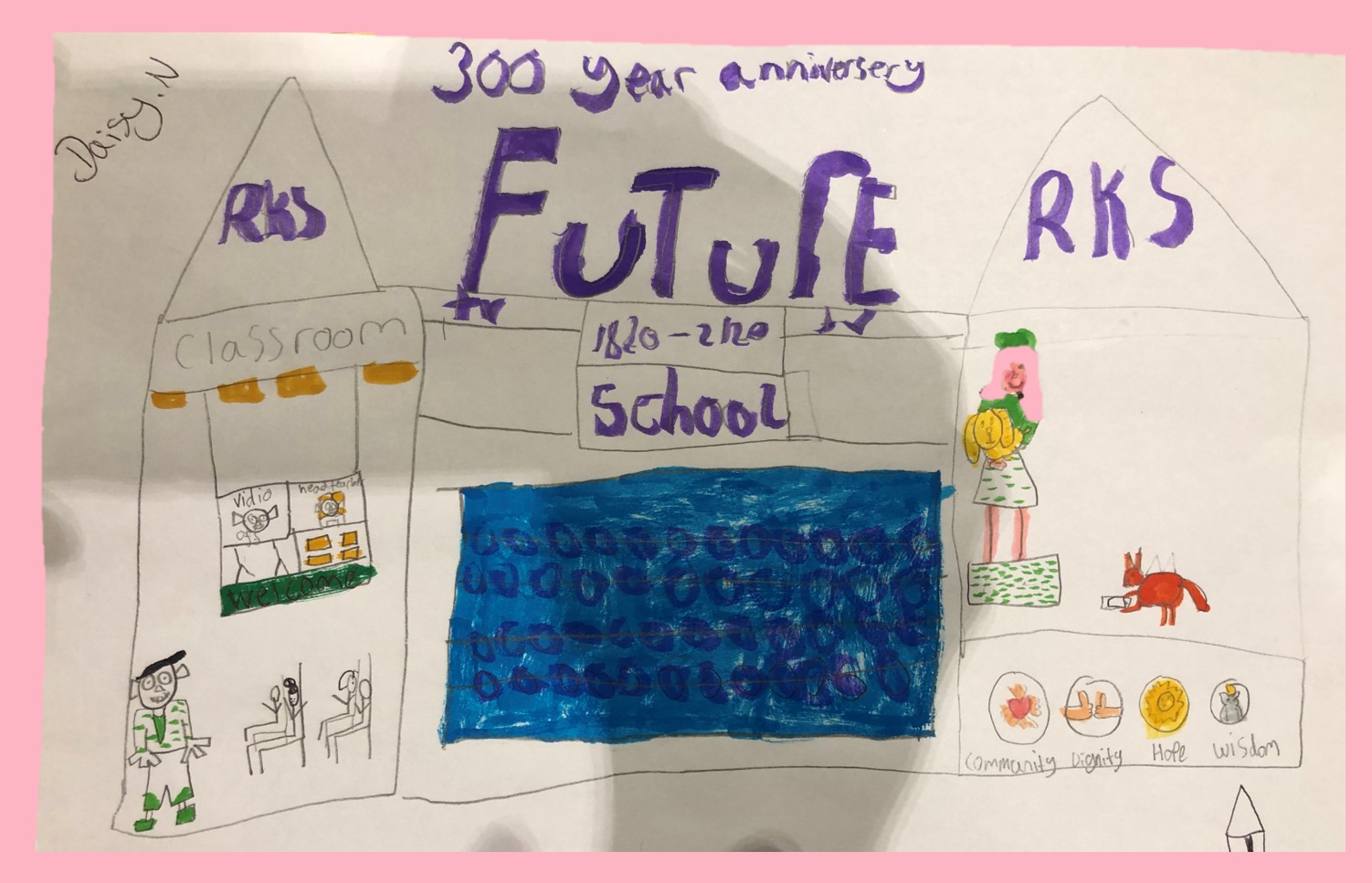 Despite these radical changes, Year 4 student Daisy has kept the school values of community, dignity, hope and wisdom, at the heart of her design.

I wonder what would the founding pupils of Royal Kent would think about these changes!

See what our membership could offer your school! Membership