In 1855, Queen Victoria had been on the throne for 18 of her 63 year rule, and many parts of Britain were thriving. Railways were scattering across the country, becoming an increasingly regular feature of a landscape dotted with factories and industry. Oval Gold locket containing a lock of hair. On the front of the locket is a cross formed by a narrow gold outline, lined with a layer of blue filled with twelve pearls. On the back of the locket is the inscription – In Loving Memory of Madeline L Gill, Died 17th May 1870, Aged 17. Gold ring for attachment to a chain, on top of locket.

In engineer Robert Gill’s eyes, Britain’s brand-new mode of transport was a huge flashing sign for wealth and social advancement. With his friend George Stephenson, he had worked on the Manchester and Leeds Railway, opening the finished line in 1842.  Robert continued to amass money in the years after this. He and a group of businessmen purchased the Crystal Palace in Hyde Park in 1851, re-erecting it in Sydenham, and Gill continued to be one of its directors for several years.
Now, in 1855 it was time to spend some of this vast accumulated fortune. Amongst the wave of industrial activity, transport and trade, the Gill Family made the move from Norfolk to a quiet corner of Elmbridge.

Their new home, Apps Court, was then an imposing, centuries-old mansion in Walton dating back to pre-Norman Conquest. Situated within 150 acres of grassy parkland, the house itself had a distinctly palatial appearance with its white brick, stone pillars and huge windows. The key surviving item from the family’s years here is the album made up of written memoirs, photographs, drawings, two family trees and printed scraps that include the story of the house and its last occupants. The album was started by Robert Gill’s eldest daughter, Frederica, as a gift for her brother Robert. It is an incredibly rare and unusually early study in family history which gives us a partial picture of the family’s successful and comfortable life, as well as their love for one another.

Yet their tale is not without its tragedies, and this beautiful gold locket holds the story of one of them. On the front of the locket is a cross formed by a narrow gold outline, lined with a layer of blue filled with twelve pearls. When carefully prized open, a lock of hair is revealed sitting inside the hollow centre.  The inscription on the back sheds light on the strange contents – ‘In Loving Memory of Madeline L. Gill, Died 17th May 1870, Aged 17’.  Frederica and Madeline were the first and third oldest daughters of Robert Gill. Madeline lived a very short life – after moving to Apps Court when she was just two years old, she sadly died there aged only seventeen – while the 1881 census reveals that Frederica continued living at the family home with her mother and siblings afterwards. There is no hint as to which Gill owned this locket containing Madeline’s hair. But its contents certainly provides a tiny sliver of insight into this family’s intense and continued pain at losing a child so young. 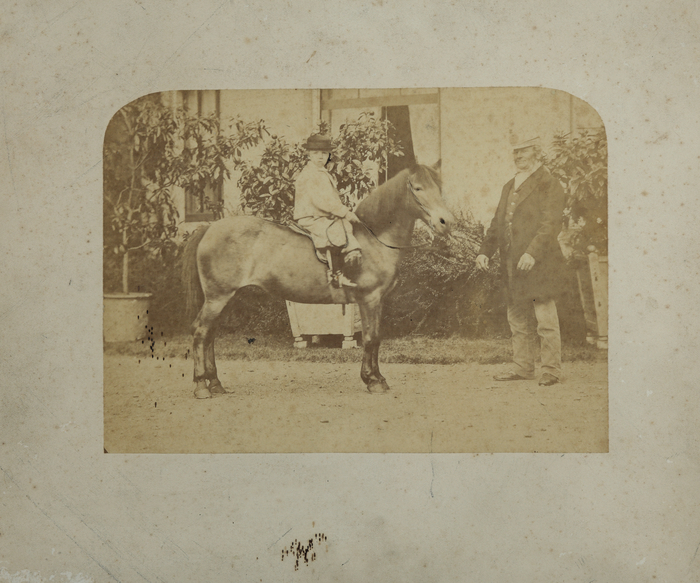 To learn more about the Gill family