Children's lives in Victorian Elmbridge may seem unlike those today, but through the items in our collection we can see similar experiences of home, play and school.

What do we mean by the Victorian era? The period is defined by the 64 year reign of Queen Victoria, from 1837 to 1901. Life for a child born at the beginning of this period would have been very different to one born at the end.

During this time, industrialisation led many families into towns and cities. Initially, living conditions generally declined, and workers had little political power to change unfair practices. By the end of the period, however, life expectancy had increased by ten years, workers had organised into unions, and the right to vote had been partially extended.

Many things that we take for granted today were pioneered or developed during the Victorian age. School became mandatory and, as transport links and technology developed, luxuries such as books became cheap enough to eventually appear in every household.

By looking at the lives of children throughout this timeframe, we can see the radical changes that not only took place during the reign of Queen Victoria, but also in the years since her death. Many aspects of everyday life, such as regularly attending church, have lessened since the nineteenth century, but certain childhood traits such as play have always had a place of the lives in children.

Bronze Bronze of Queen Victoria to commemorate her Diamond Jubilee, made in 1897 at Thames Ditton Bronze Foundry by F.J. Williamson.

Magazine picture Cut out magazine picture of Queen Victoria, probably a Diamond Jubilee edition. Framed in gilt, with a leatherlook cardboard back and gilt clips.

Jubilee dish Shallow glass dish with scalloped edges, a souvenir of Queen Victoria's Diamond Jubilee in 1897. Moulded glass, with a border of thistles, shamrocks, daffodils and roses. There is a portrait of Queen Victoria in the base.

Framed picture Framed and glazed colour picture of Queen Victoria. This was probably a souvenir given away by a magazine, and has been framed.

Statue Photograph of a statue of Queen Victoria, Blackfriars. Made in 1896.

Statue Sepia portrait postcard entitled Victoria Memorial, Derby. Queen Victoria with crown, orb and septre is standing on a stepped stone plinth with the text Victoria RI 1906. The memorial is thought to have been cast at the Thames Ditton Bronze Foundry, and was unveiled by Edward VII in 1906.

For a Victorian child, quality of life depended largely on the wealth of the family you were born into. This influenced the home you lived in, the clothes you wore and your access to healthcare.

Working class children in industrial towns often lived in small terraced houses that lacked basic amenities. They wore simple items of clothing until they wore out. Those in extreme poverty might rely on alms houses for food and accommodation.

The middle classes usually lived in larger houses in residential districts, whilst the aristocracy frequently owned large estates away from urban areas. Their children tended to wear smaller versions of adult fashions, which became gradually more flamboyant during the era.

Before direct intervention by the state in the 1870s, many children only received a basic education. Schools were often run on charitable basis by individuals who wanted to help educate the very poor.

Nevertheless, before the introduction of compulsory education in 1880, the teaching standards of Dame Schools varied significantly, from day care to a good foundational education. 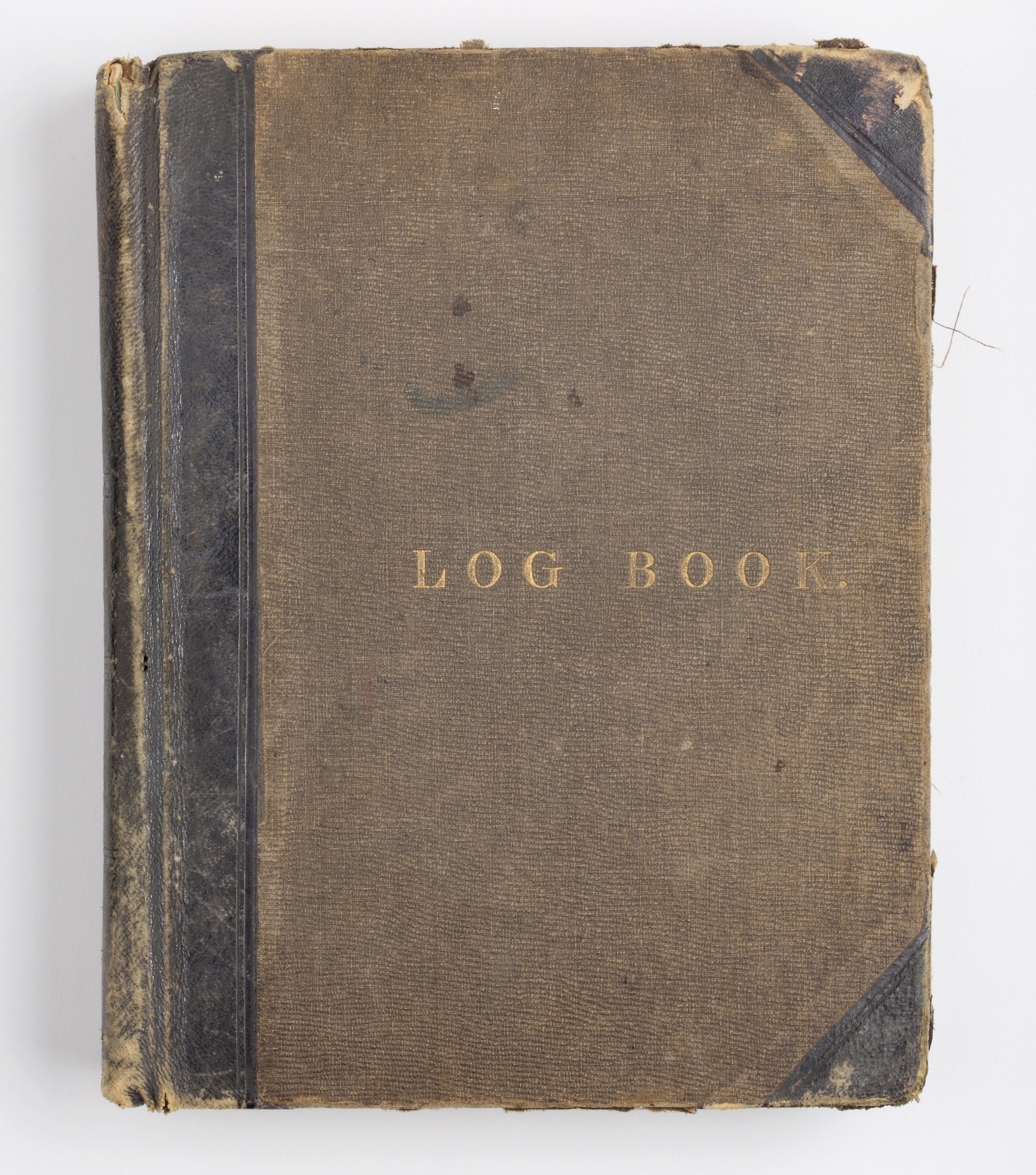 MP Francis Drake, of Esher, founded a Dame School in Weybridge in 1634 – one of the first schools in the borough. The Old School Cottages in Baker Street was the site of the school from 1650 onwards.

The British state had imposed The Factory Act since 1833, stipulating that employees had to provide part-time education for workers under the age of 13. This law, however, was easily bypassed. Real breakthroughs came only in 1870, when Government funded schools could be built across the country, and again in 1880, when education for all children was made compulsory up to the age of 13. 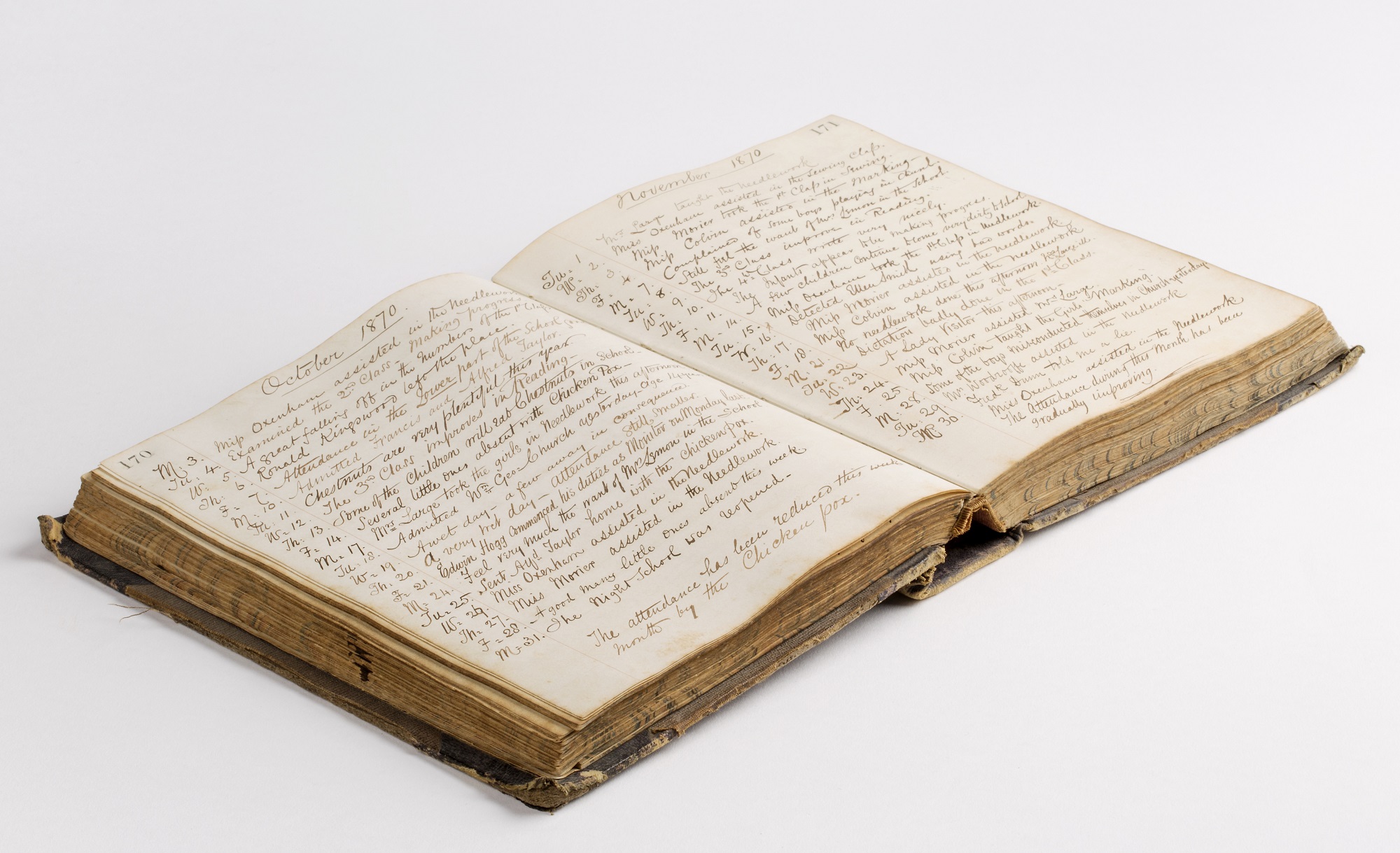 A sampler is an example of needlework skills stitched into a piece of fabric. Victorian schoolgirls used samplers to learn and practice new needlework techniques. Ellen Watkins, a student at East Molesey School, produced this sampler in 1872. As well as the alphabet and the numbers 1-5, it has a verse that reads "to speak the truth is always right". Often, samplers were used as educational tools that also contained moral or religious passages.

The sampler of Sarah Ann Tilley. It is embroidered in petie point with the alphabet and numbers at the top, the tree of life, Adam and Eve, various flowers and butterflies, and the verse 'My dear Redeemer is above, Him will I go to see, And all my friends in Christ below, Shall soon come after me.' It also says 'Sarah Ann Tilley in the 13th year of her age 1848'.

A Victorian child's sampler made in 1868, with a blue background. the letters of the alphabet are in blue, green, orange and red wools, underneath 'Hersham School'. An oak pattern in yellow, green and red wools is below the lettering. It is framed in maple wood.

Victorian schooling probably leaves its biggest legacy in literature. Charles Dickens' novels paint a very grim picture of school life for a child living through the nineteenth century. Dickens visited schools in London and wrote on school systems. He said of Field Lane Ragged School, which was typical of the era, that it was just "two or three...miserable rooms, upstairs in a miserable house". This is a Victorian school slate from Sunbury. There are alphabet capitals, in copper plate style writing, on one side, and clear slate on the other, in a wooden frame.

The Ragged School Museum, in London's East End, shows what a Victorian Ragged School would have looked like. The original school was opened in 1877 by Dr. Barnardo, and was the largest of its kind at the time. This is another Victorian school slate mounted in a wooden frame with rounded edges. Etched on one side is 'Geoffrey Barrell' and an image of Mr Chad. It has mitred corners held in place with small pins. 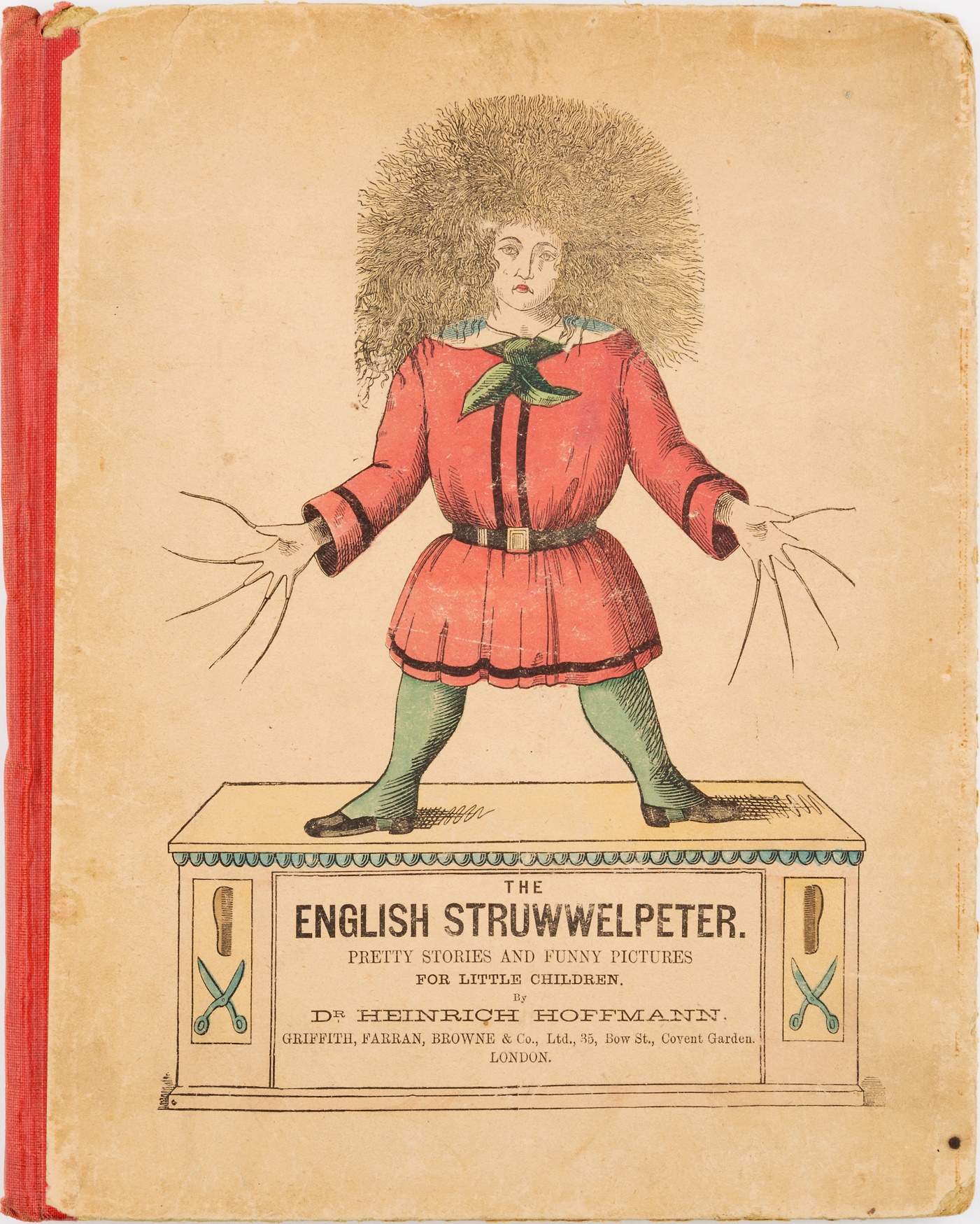 Falling between education and fun, books became progressively more available throughout Queen Victoria’s reign. Not only was this due to the fact that more of the population could now read, but rapid industrial and infrastructural growth meant that books were cheaper to produce and to transport.

Moral and instructive literature, such as the stories by Heinrich Hoffmann collected in Struwwelpeter, was a staple of educational life for Victorian children. However, their appeal lay in the fact they were also incredibly entertaining.

The Boys' Own Annual

Boys Own, a weekly paper also published as an annual, was set up not only to encourage young boys to read, but also to instill religious values in its readers. Romantic writers were keen to make didactic and moral tales the butt of all their literary complaints; claiming that they limited the young readers’ imagination.

Boys Own Annual 1887, cover (left) and open (right) On the inside cover there is an illustration of a tiger Fantasy was also a popular genre throughout the Victorian era but even these novels became tinged with moralistic undertones over time. Stories were written that involved talking animals with human-like family setups.

Alice in Wonderland, a fantastical Victorian classic, celebrated its 150th anniversary in 2015. The story has close links to the local area with Cecil Hepworth producing the first feature-length film adaptation of the book in 1903 at his Walton studio, two years after Queen Victoria’s death.

The Victorian moral story has long been parodied and mocked, but this illustrates how much of an institution these stories were. Edward Gorey, the twentieth century American writer and illustrator, often located his work in Victorian settings but inversed the traditional morally instructive model. The majority of the children in his books, instead of learning from their mistakes, usually bring about their own demise.

Construction toys, such as this example from the late nineteenth century, were first introduced in the late 1700s and are still popular to this day.

Although the lid is missing from the box, the contents are in fantastic condition and boasts inspirational illustrations for children to follow. The 100 or so bricks are made of precisely moulded quartz sand, chalk and linseed oil and came in three colours (brick red, limestone yellow and slate blue) to make them as true to life as possible. and are in three colours. The three colours represent popular building materials: red brick, tan limestone and blue slate of European buildings.

Educational toys such as this have a rich and interesting history. Sometimes referred to ‘Froebel Gifts’ after the German educational theorist Friedrich Froebel, basic toys that deal with shapes and colours are aimed at heightening a child’s understanding of the world by recognising their unique needs and capabilities through ‘free play’. Froebel invented both this theory and the concept of “kindergarten” which was a system that originated in Germany and is now used in England too.

Many of these toys, including this specific set, originated in Germany thanks to the Kindergarten system. Famous people such as Max Born, Albert Einstein and Walter Gropius all exercised their creativity by playing with Anchor Stones. The outside of the box of Anchor stone bricks, 1898.

During the Victorian period there were no outdoor playgrounds and few families had gardens big enough to play in. Only the very rich had indoor nurseries with toys.

Intricately decorated dolls were very popular for girls, and bisque dolls, characterised by the particularly skin-like appearance of their porcelain, were most popular in the late Victorian period, after 1860. This bisque doll was created in 1889. 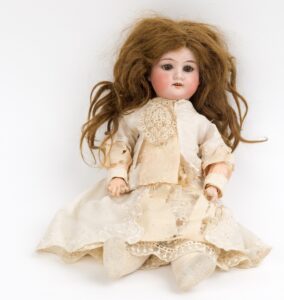 A Victorian doll’s push chair, c. late 1800s. This is an example of how ‘indoor’ toys could be brought outdoors.

Because of the fact that only the very rich tended to have indoor nurseries, the majority of Victorian children played in the street or in nearby open spaces and fields.

Like today, not all play involved toys. Chase games like tag were very popular, as was hopscotch. It wasn’t uncommon for children to make their own toys: balls from rags, and bats from sticks and branches. An example of children playing outdoors on the beach from the front of a Victorian greetings card.

Find out more about the era after the Victorians and the ensuing struggle for female suffrage in our 'Votes For Women!' online exhibition.

We love to hear your feedback. Let us know your thoughts on Victorian Elmbridge's history here!

A Century of Brownie Guides Here we celebrate over 100 years of the Brownie Guides, looking at what being a Brownie has meant throughout the organisation's history.

read more
Cecil Hepworth: Cinema's Forgotten Pioneer Cecil Hepworth of Walton-on-Thames was a key player in the early development of cinema. We're taking a look at his life and work, which helped to develop filmmaking techniques that are still used today.

read more
An Advertising Evolution From cereal packets with cartoon characters, to coronation-themed confectionary tins, this exhibition will make you marvel at the marketing of by-gone eras.