As climate change progresses, we have seen how some natural habitats are being destroyed with devastating consequences. Abundant green spaces and common land in Elmbridge have been essential to conserving wildlife throughout history. The key question that students addressed in this section was:

How have nature and green spaces in our local area changed over time, and what can we do to conserve them?

This ‘Nature Note Book’ belonged to Joyce Anstey, who was born in 1923 and attended the Hall School in Weybridge from 1933-39.

It includes studies on fruits, nuts, underground stems and the parts of a flower, with hand-coloured drawings. It is an example of how students can better conserve the natural environment by learning about it, and many historic students as a consequence knew how to grow and maintain their own plants and produce. 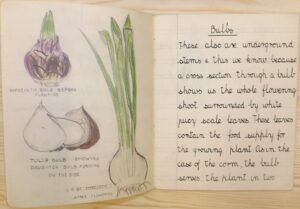 The inside of Joyce Anstey’s ‘Nature Note Book’. Watercolour of a dandelion, Walton Common, 1969.

Local botanist Ethel Harting painted over 100 watercolours of plants found locally in the late 19th to early 20th century. The Victorians’ appreciation of local nature and concern for its gradual loss in the borough is clear, and continues through to the modern day. 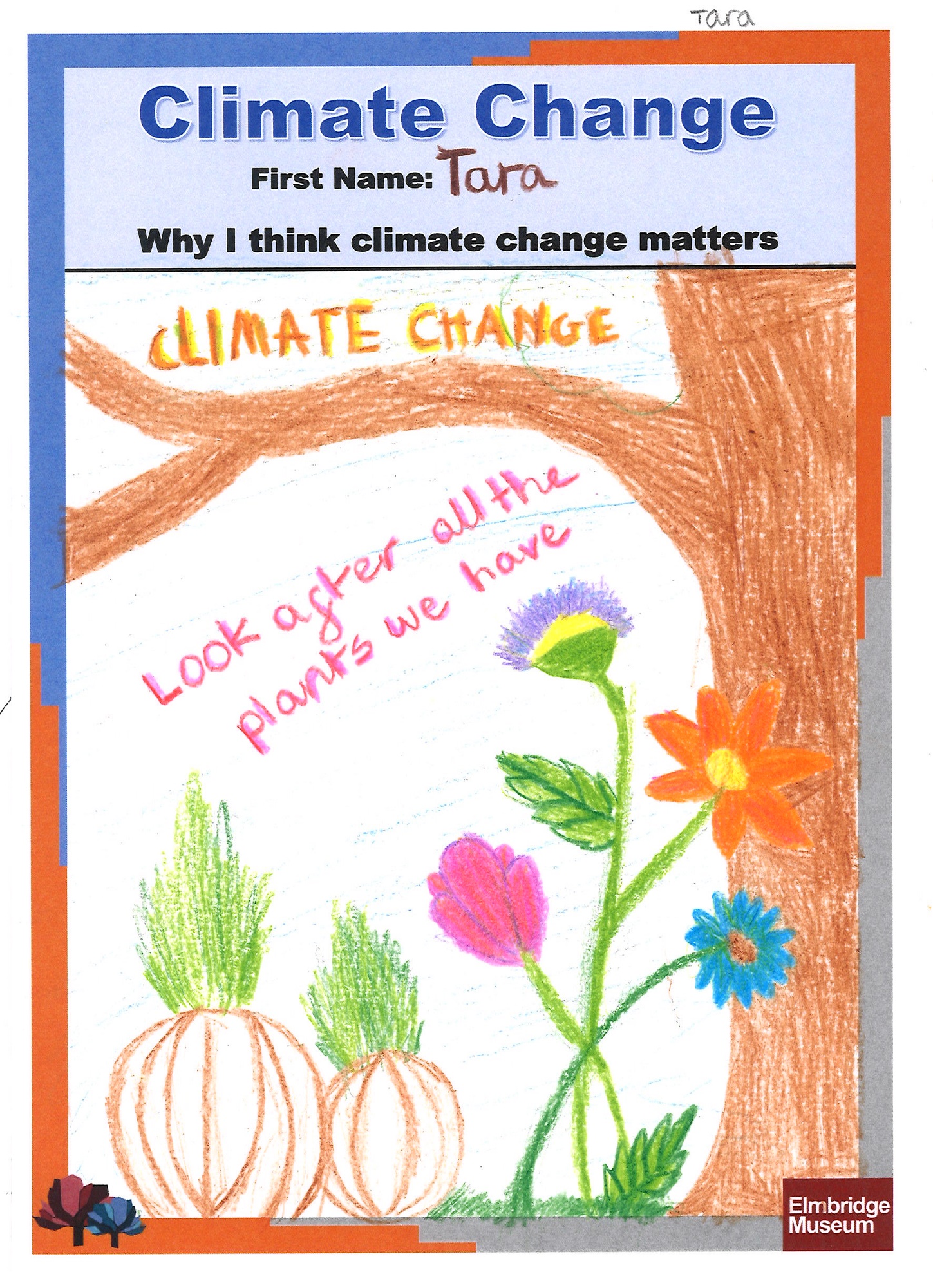 Tara 'Climate change. Look after all the plants we have.' 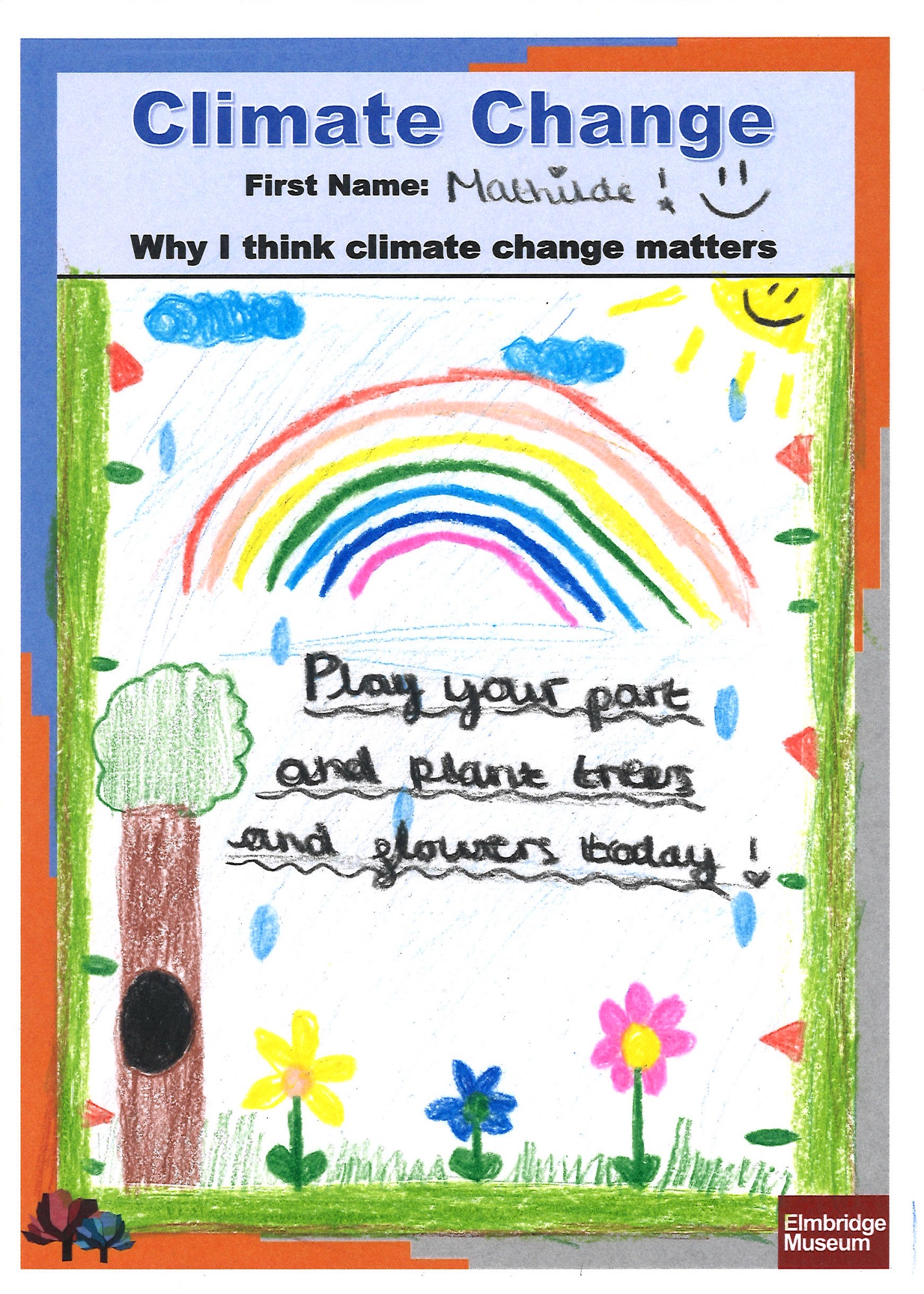 Mathilde 'Play your part and plant trees and flowers today!' 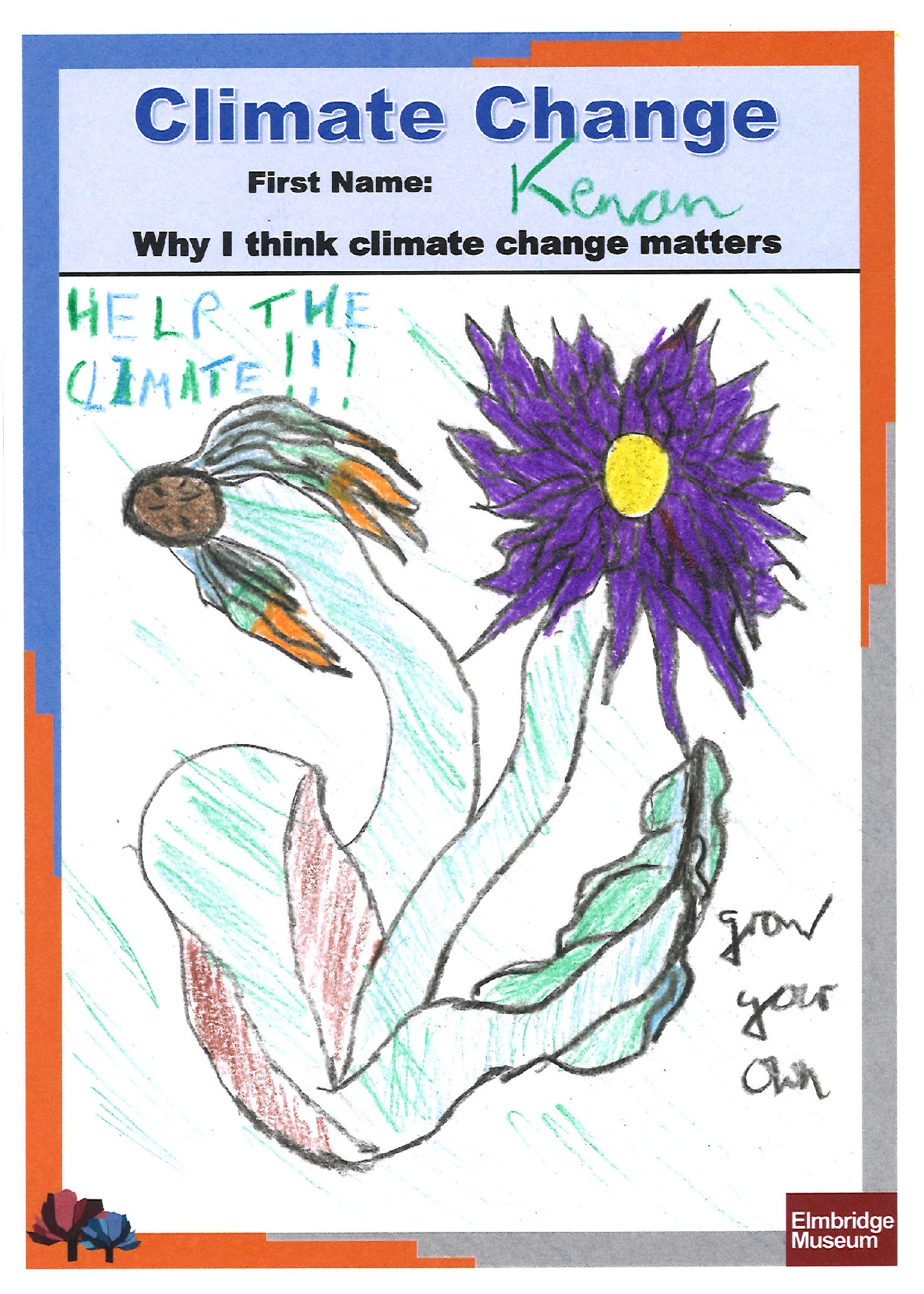 Kenan 'Help the climate! Grow your own.' 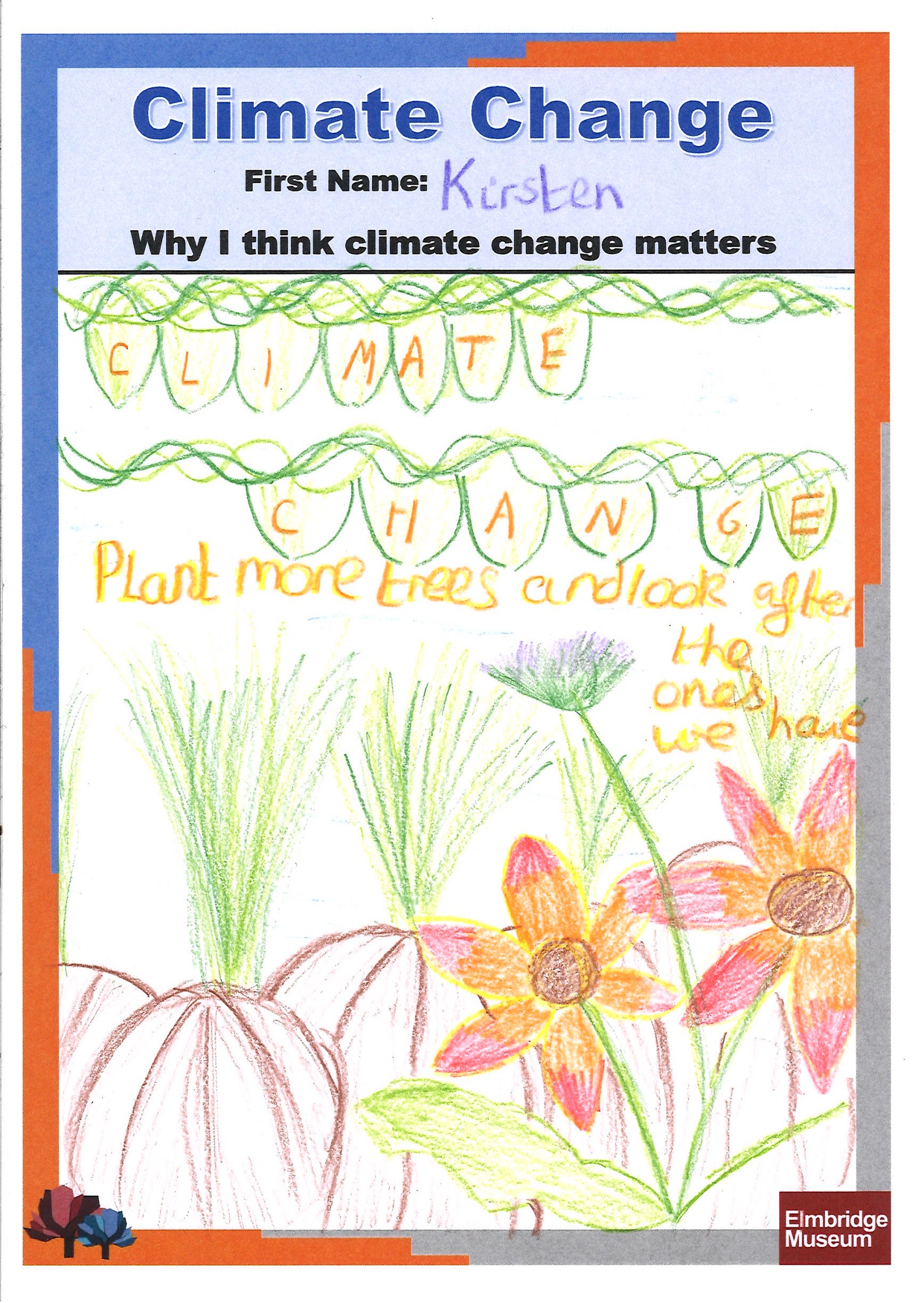 Kirsten 'Climate change. Plant more trees and look after the ones we have.' 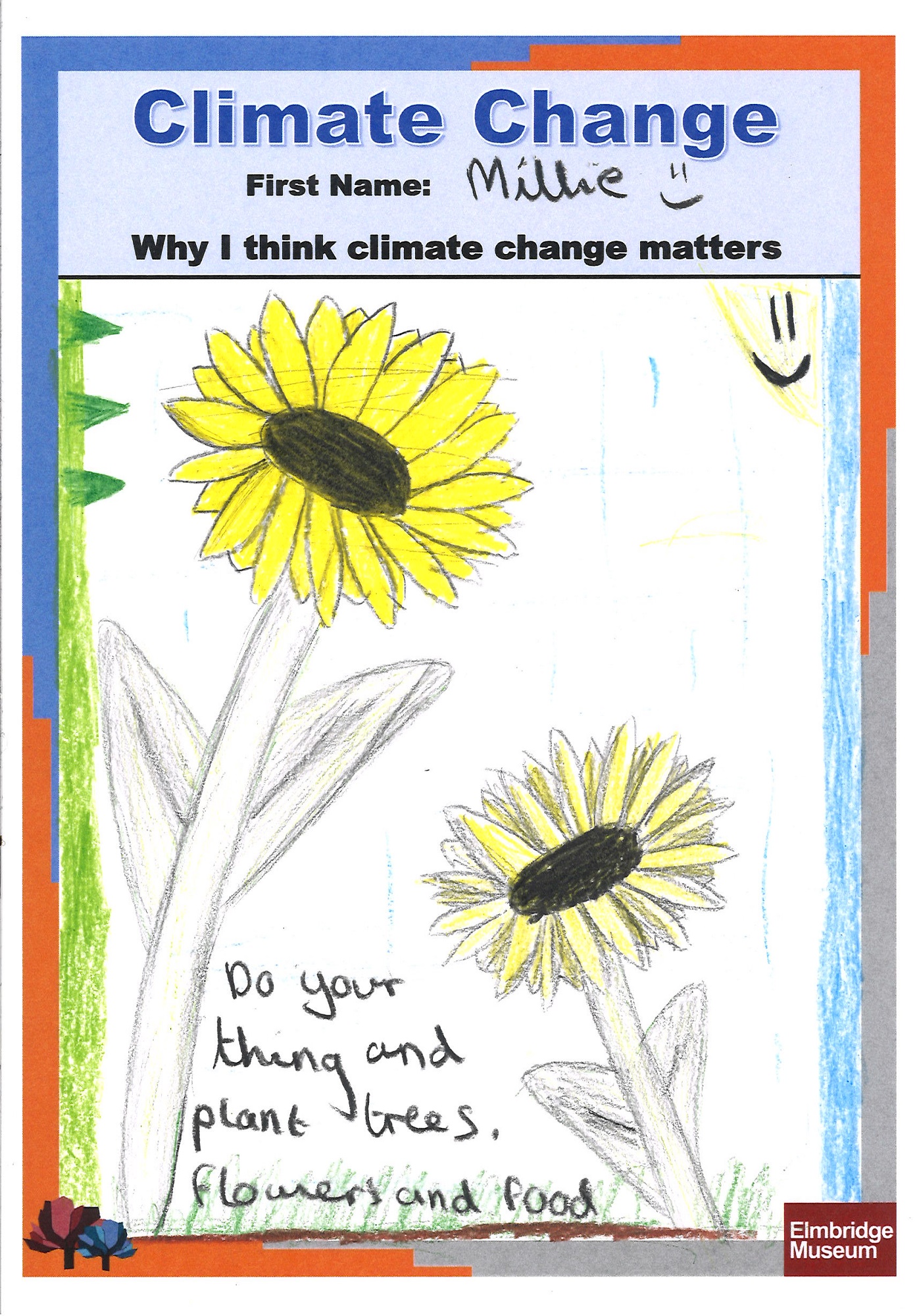 Millie 'Do your thing and plant trees, flowers and food.' 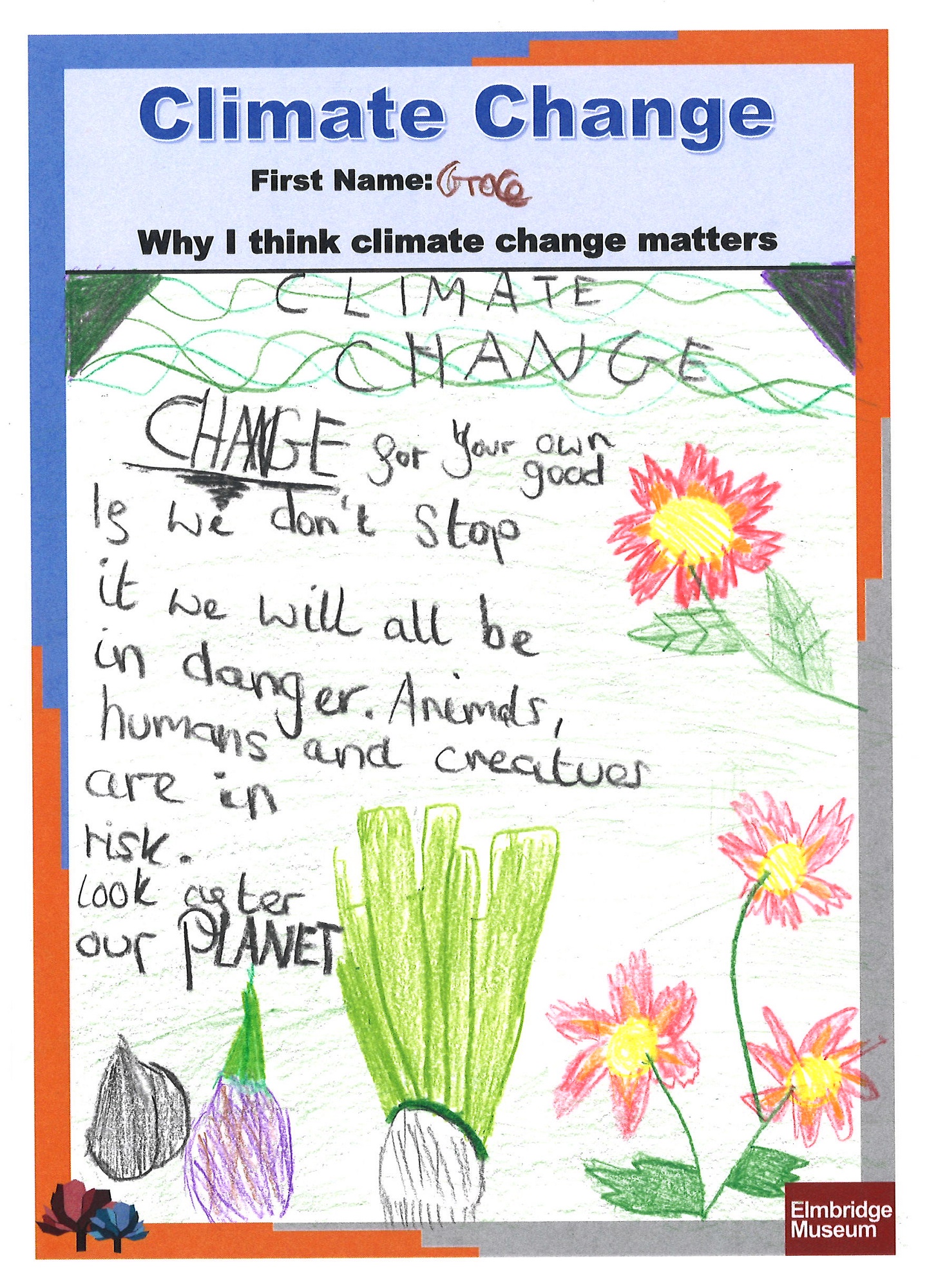 Grace 'Climate change. Change for your own good. If we don't stop it we will all be in danger. Animals, humans and creatures are in risk. Look after our planet.' 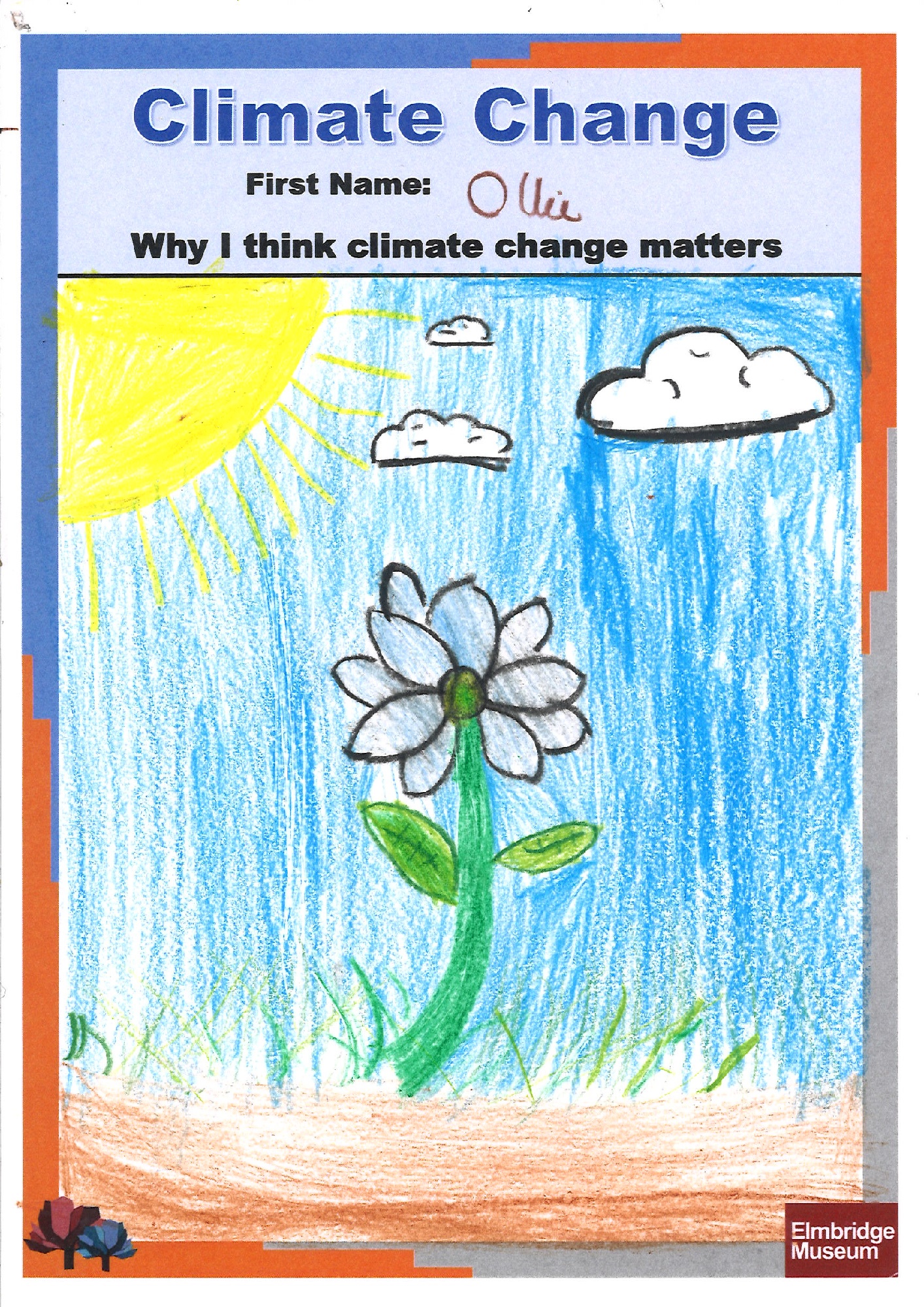 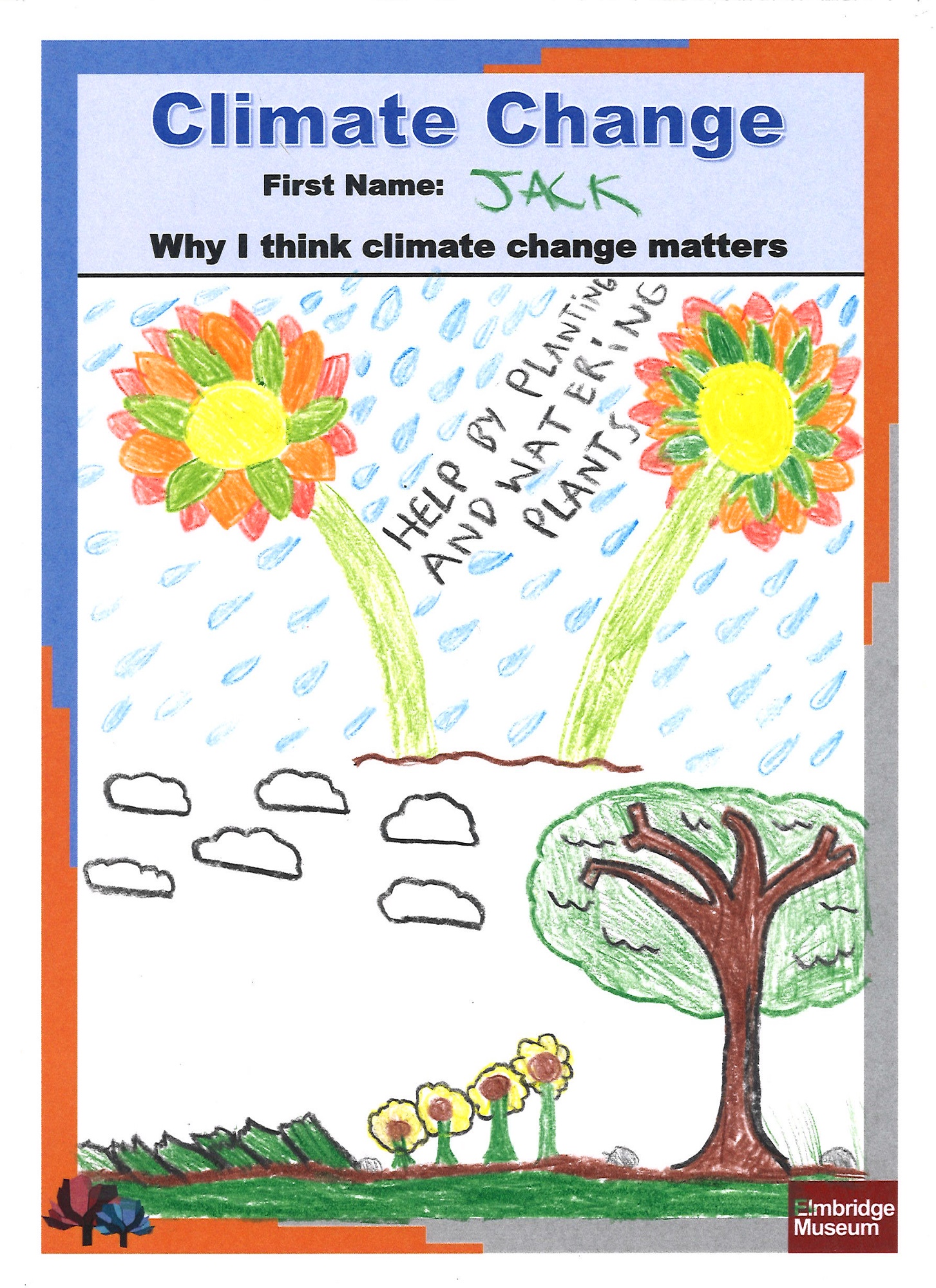 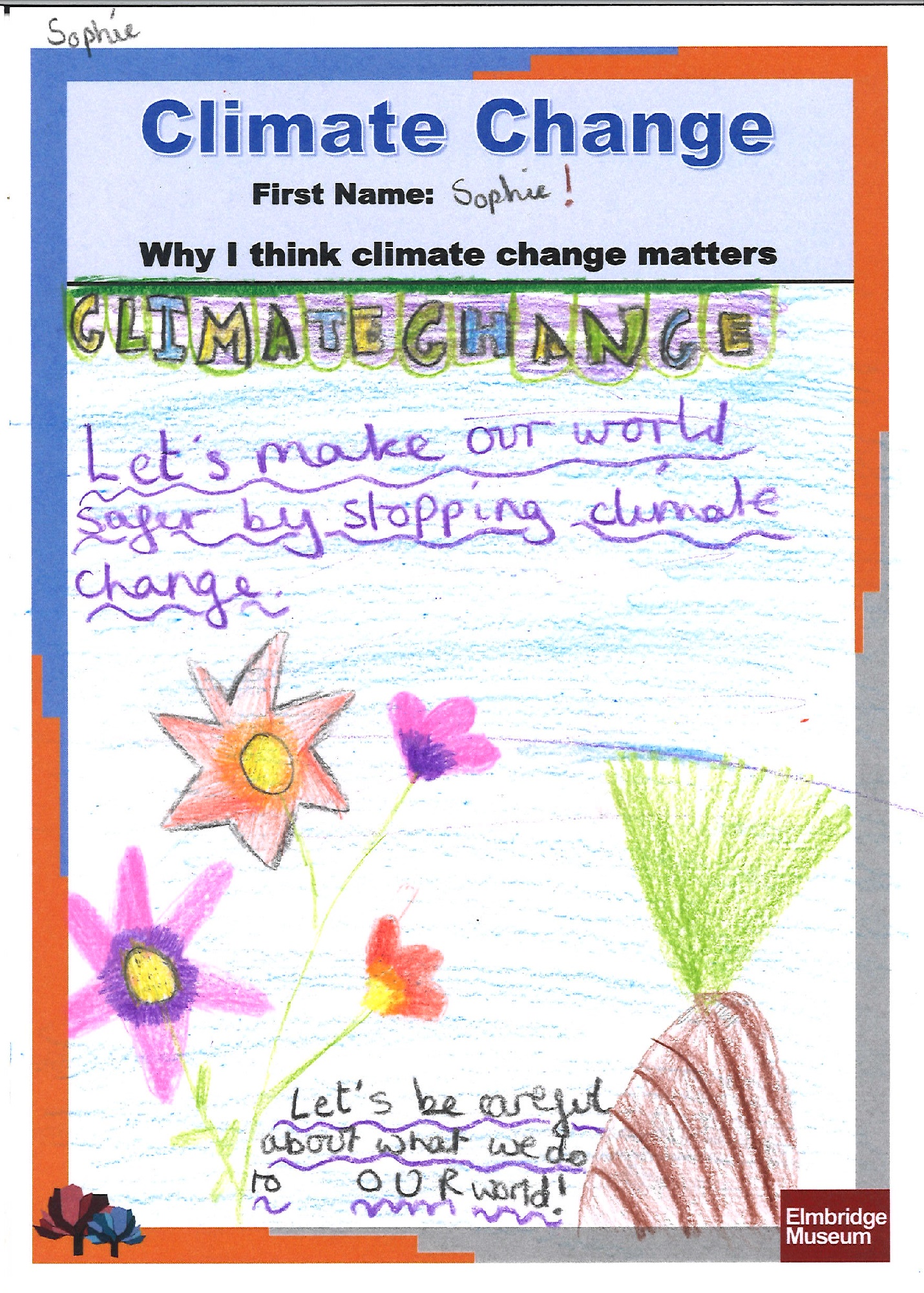 Sophie 'Climate change - let's make our world safer by stopping climate change. Let's be careful about what we do to our world!' 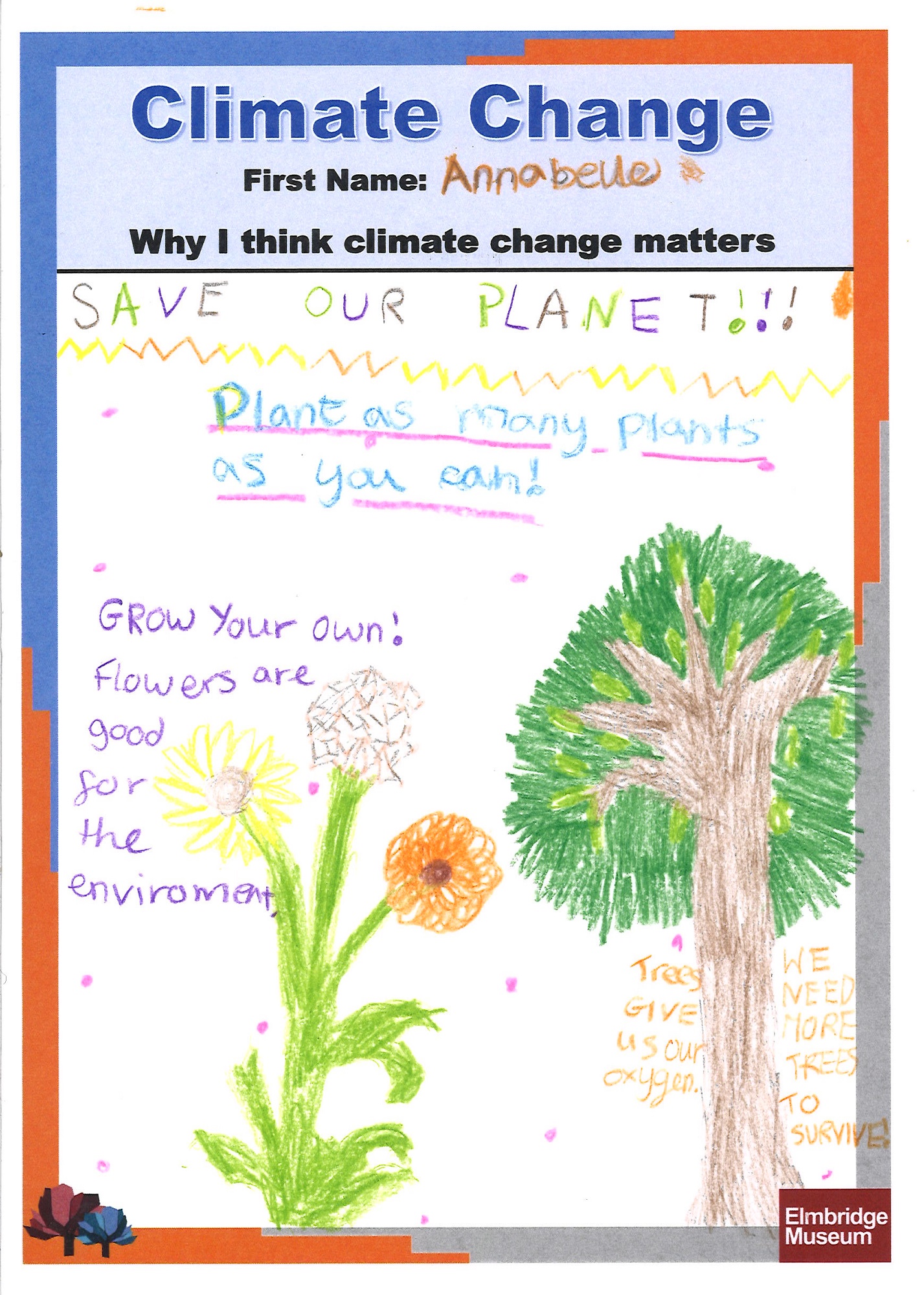 Annabelle 'Save our planet!!! Plant as many plants as you can! Grow your own! Flowers are good for the environment. Trees give us our oxygen. We need more trees to survive!' Georgia 'Climate change - if this doesn't stop we are carrying on killing the world! Do you want to do that?' 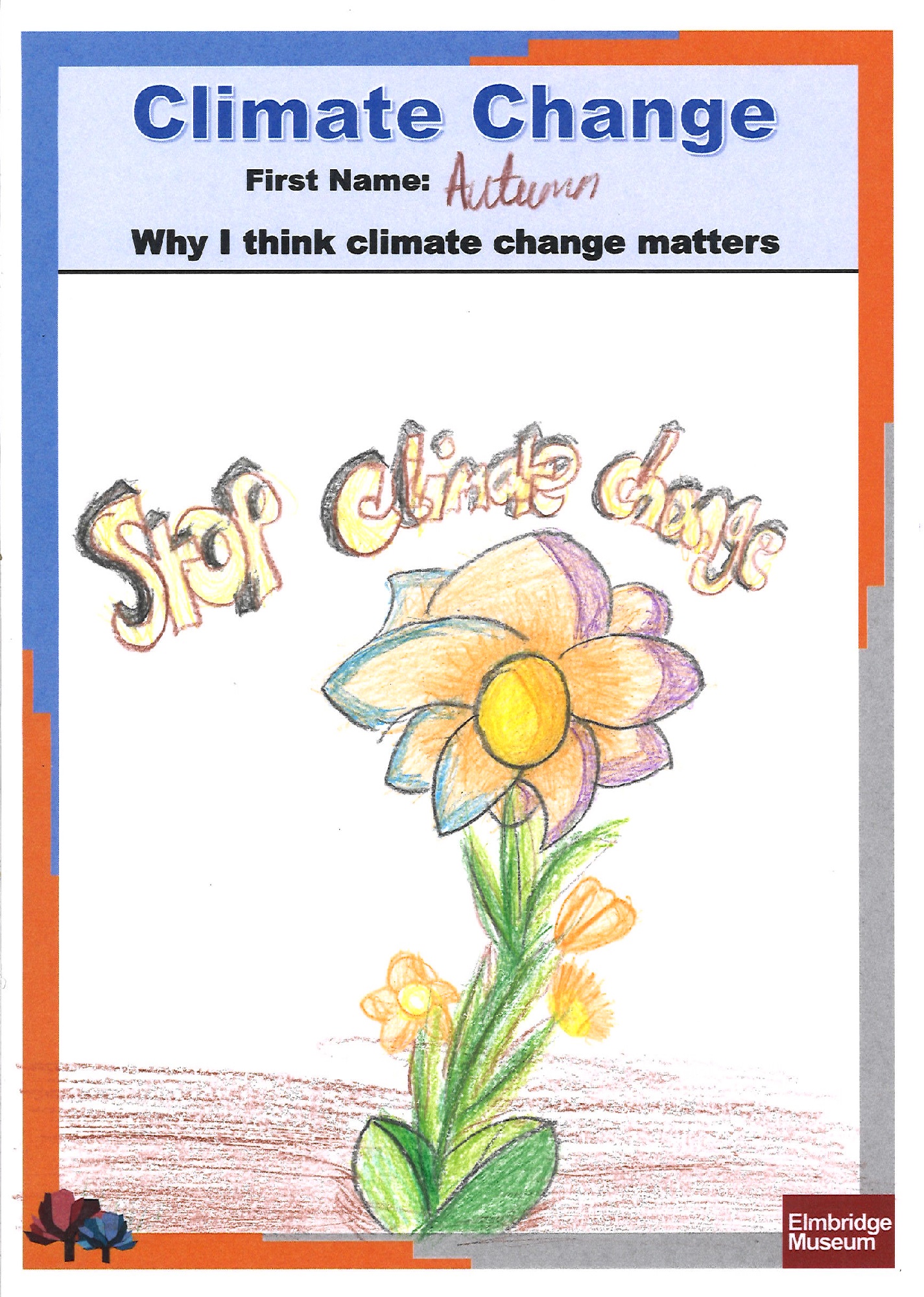 Sophie 'Spread the word!! Do your part! Change the world! Use your heart!' Talulah 'Be safe. Climate change must be fixed!' 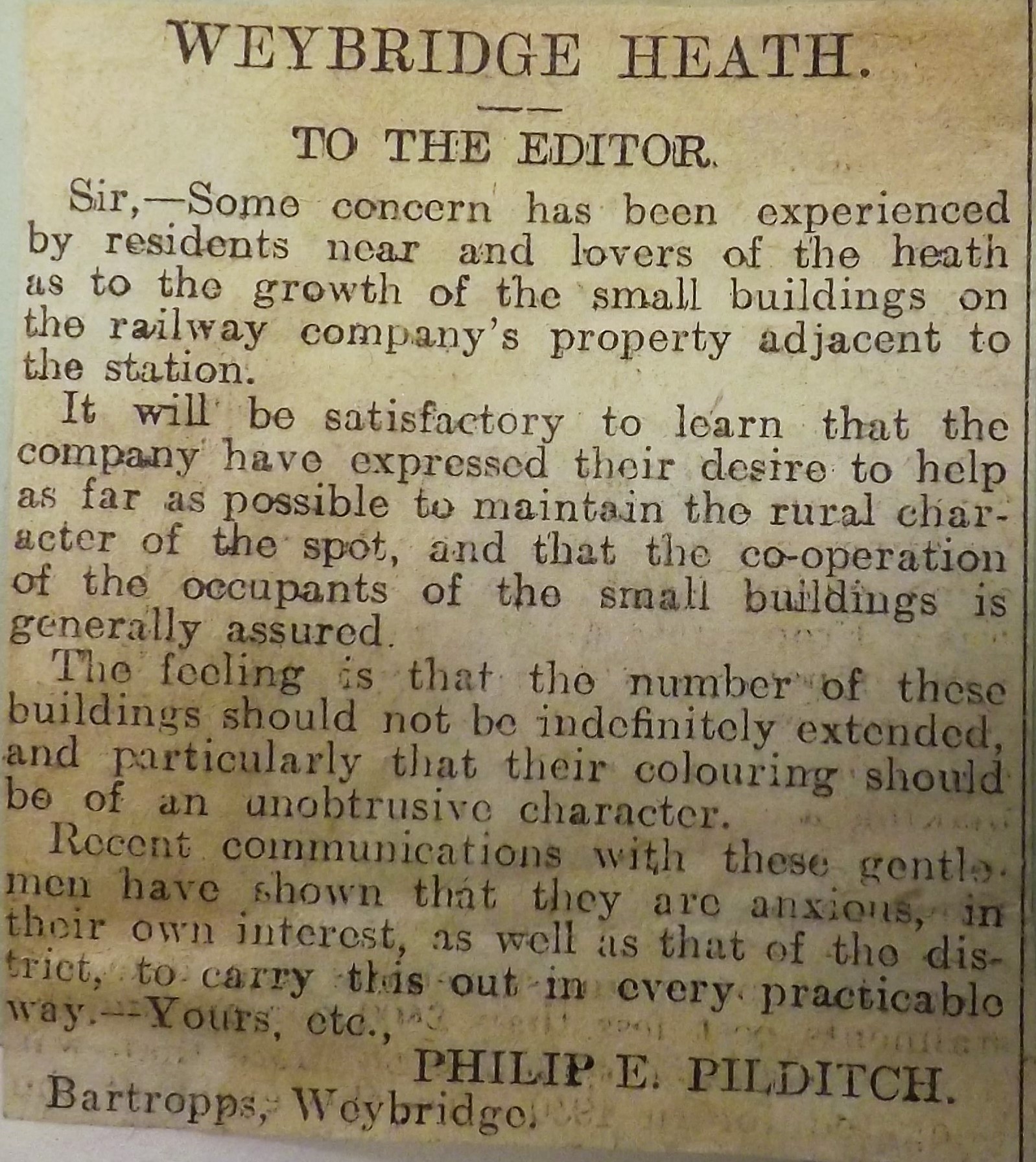 Conservation and the Commons

“Some concern has been experienced by residents near and lovers of the heath as to the growth of the small buildings on the railway company’s property adjacent to the station… The feeling is that the number of these buildings should not be indefinitely extended.”

This cutting comes from a scrapbook compiled by Sir Philip Pilditch, of letters and news articles relating to Weybridge Heath, The Commons Preservation Society and the Weybridge Poors Allotments. In this, he raises concerns about developing heath land for new railway buildings in May 1930. It shows that, despite the railway’s many environmental benefits as a mode of transport, it could also have environmental drawbacks if it was built over green space full of wildlife.

Allotments were also initially a cause for concern amongst Victorian residents. 72 acres of allotments were set aside for the poor after Weybridge Common’s enclosure in 1800, and the use of heath land for this raised opposition because of how it would destroy some local wildlife. Today, however, allotments are seen as a great support to sustainable living and enable many people to grow their own produce, reducing the carbon footprint of their food.

Why might it have been important to residents to keep their park land?

Do we have more or less buildings now compared to the past? How has this affected nature in our local area?

A footpath to Arbrook Common, Claygate.

What can you see in this image?
What are the advantages of people using
the footpath and walking rather than
building a road here?

Postcard of a watercolour entitled 'A Corner of Esher Common',
with a pond and trees on the right, a cottage on the left
and geese in the centre.

West End Common, in Esher. Three
children are sitting by the pond.

What might the children in this photo
have been doing?
Why does nature and wildlife thrive
in areas that aren’t built up?

What are some of the things people could grow
on their allotments?

‘Save our planet, before it’s too late!’ 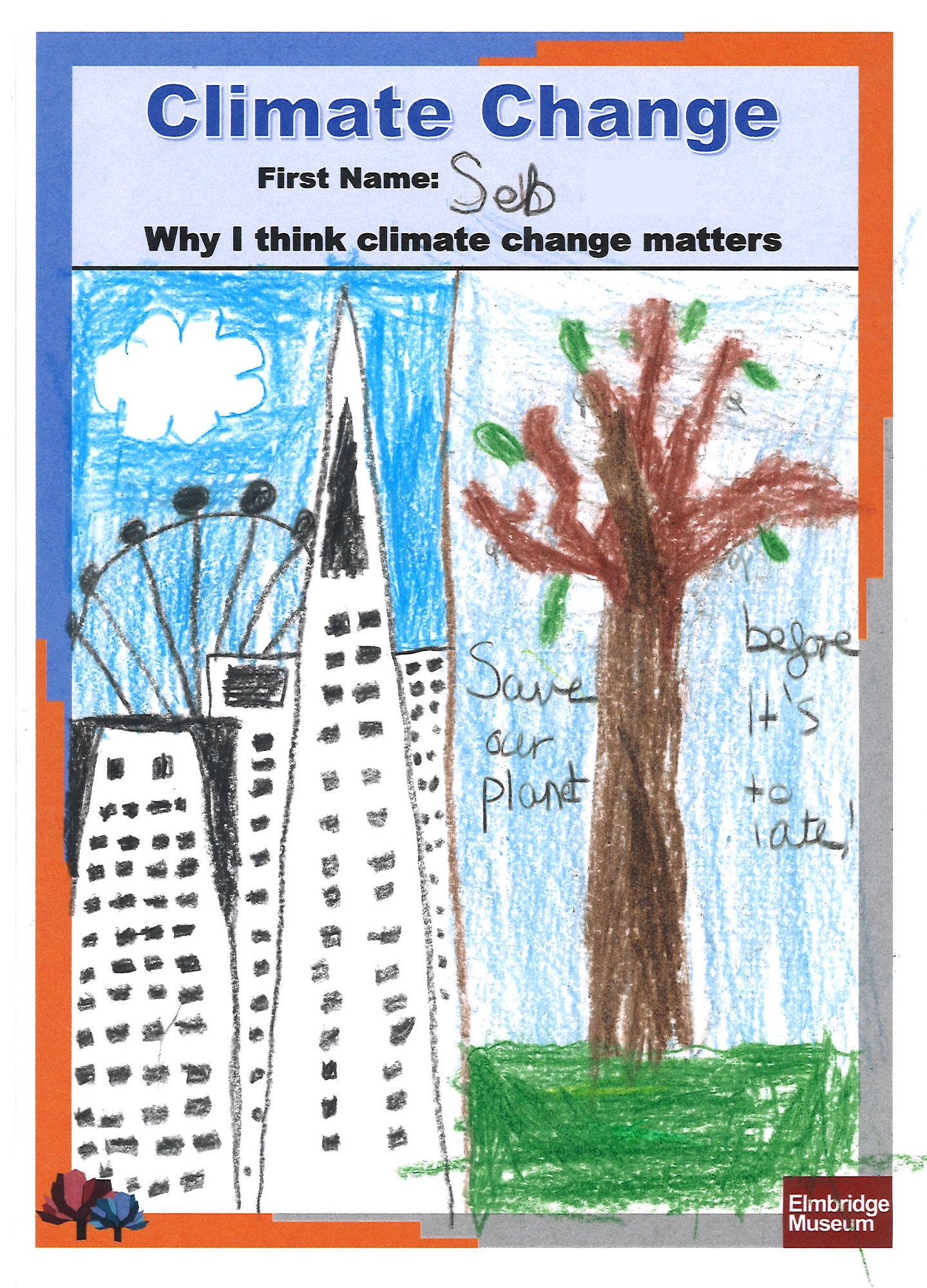 ‘Help by watering the world. Help by growing out the ground!’ ‘Bad: Do not litter, it is bad for the environment. Good: Put your rubbish in the bin, it saves the animals and the earth.’ 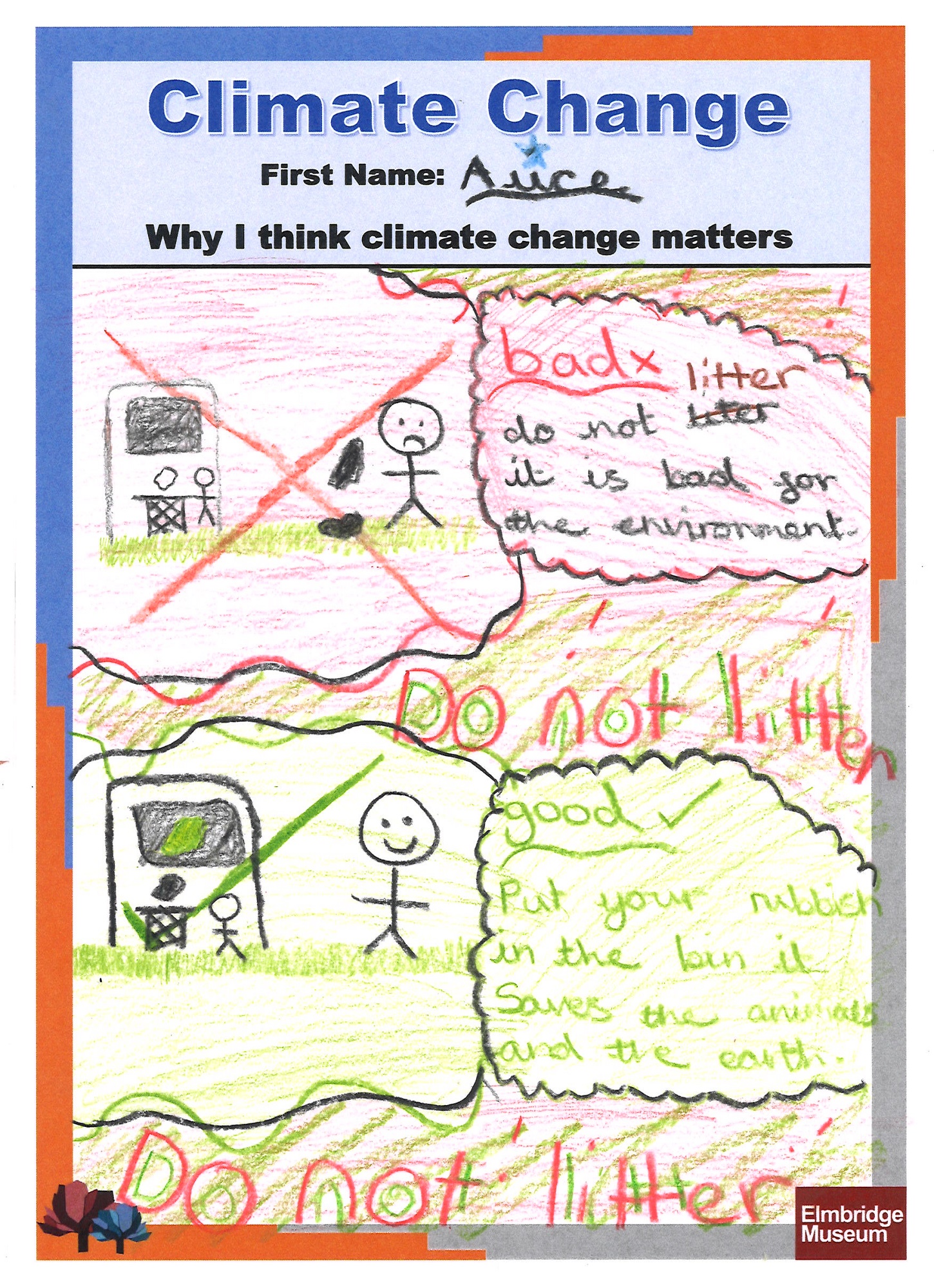 ‘Save the planet!! Without trees, our air would be very polluted. To stop that, we should stop cutting down trees!’ ‘Help our planet by planting plants and saving our green space!’ 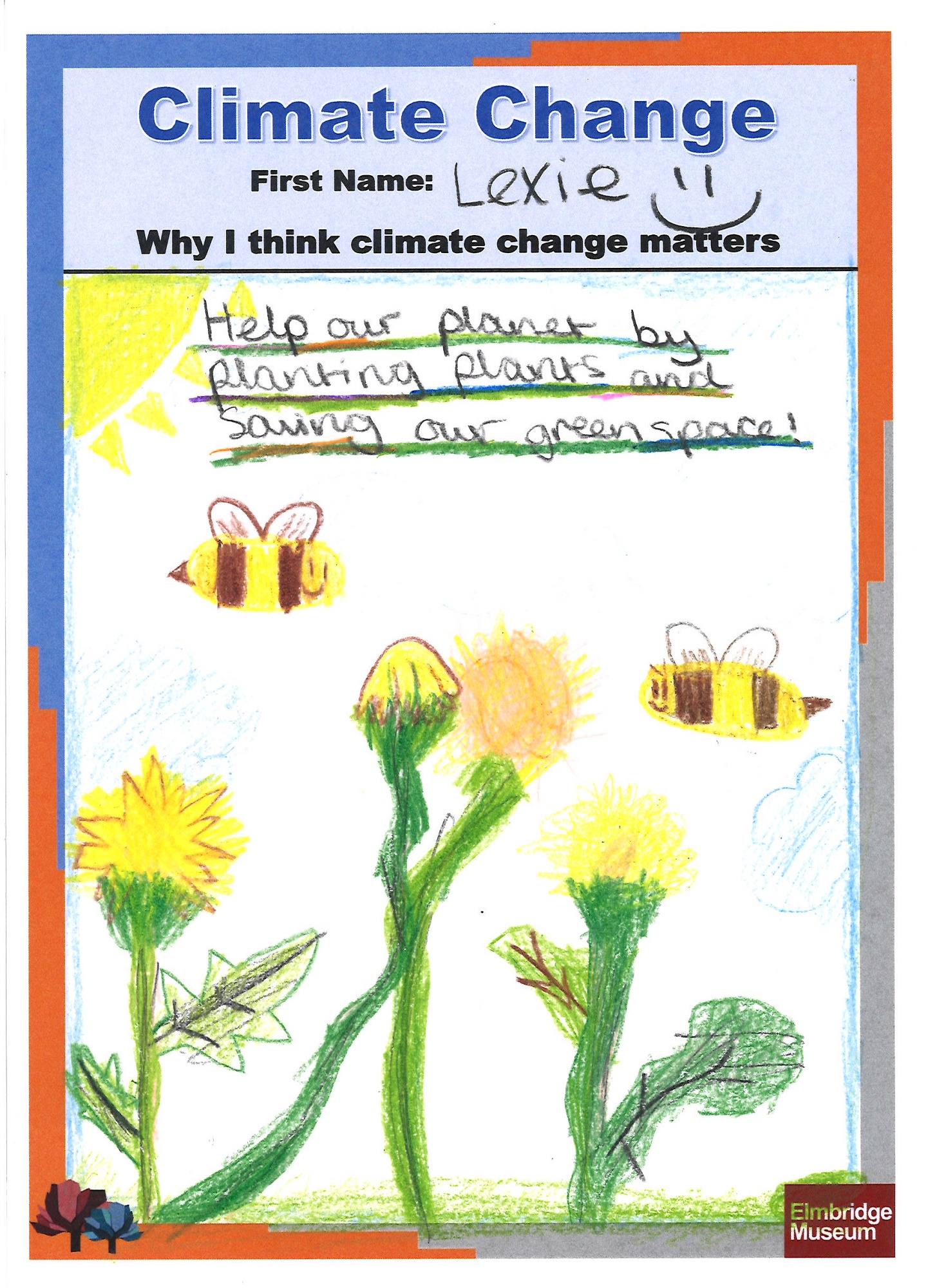 ‘Save our wildlife. Don’t cut down wildlife, it’s someone’s home.’ 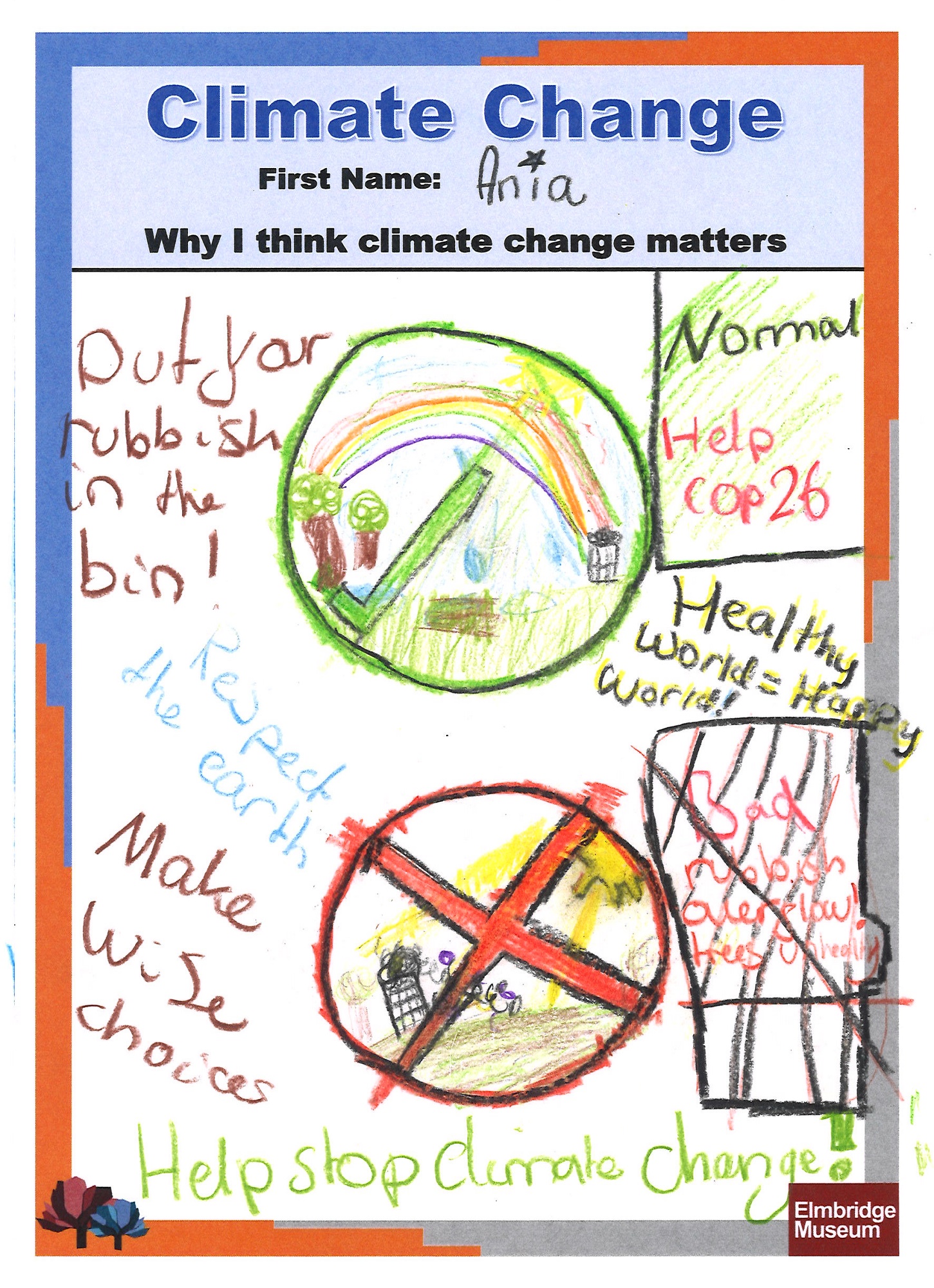 ‘Stop chopping trees and save forests! Save the world!’ 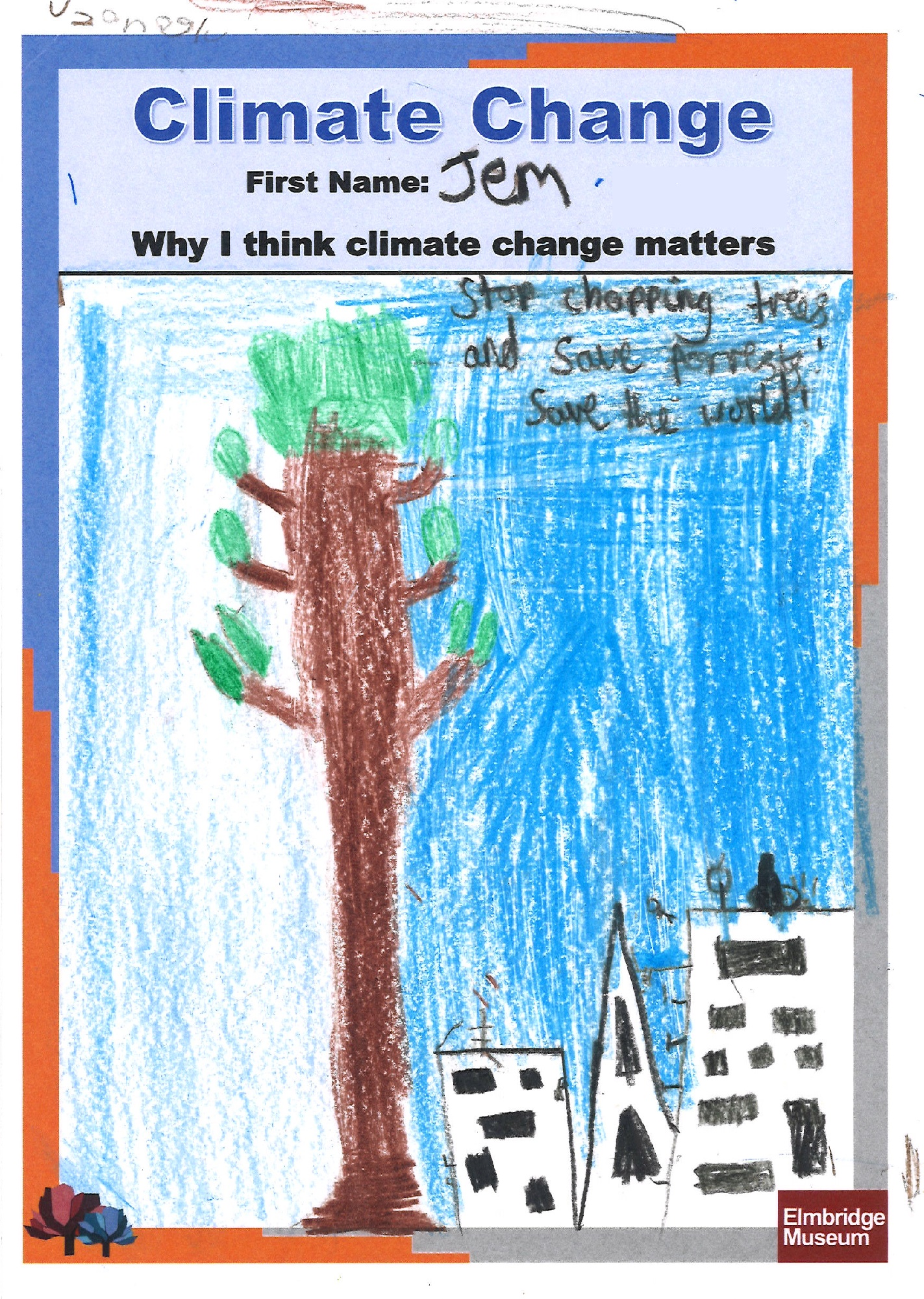 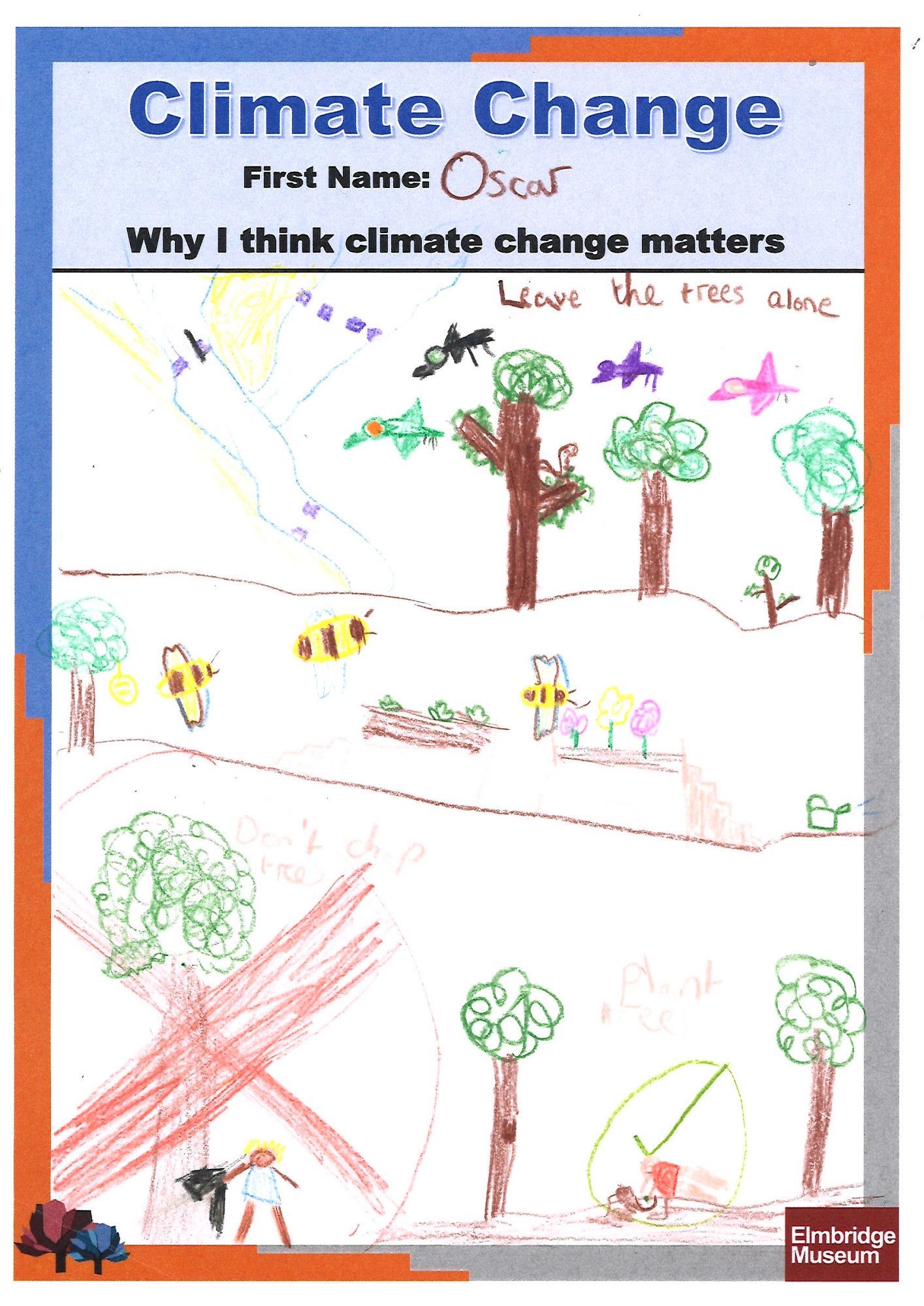 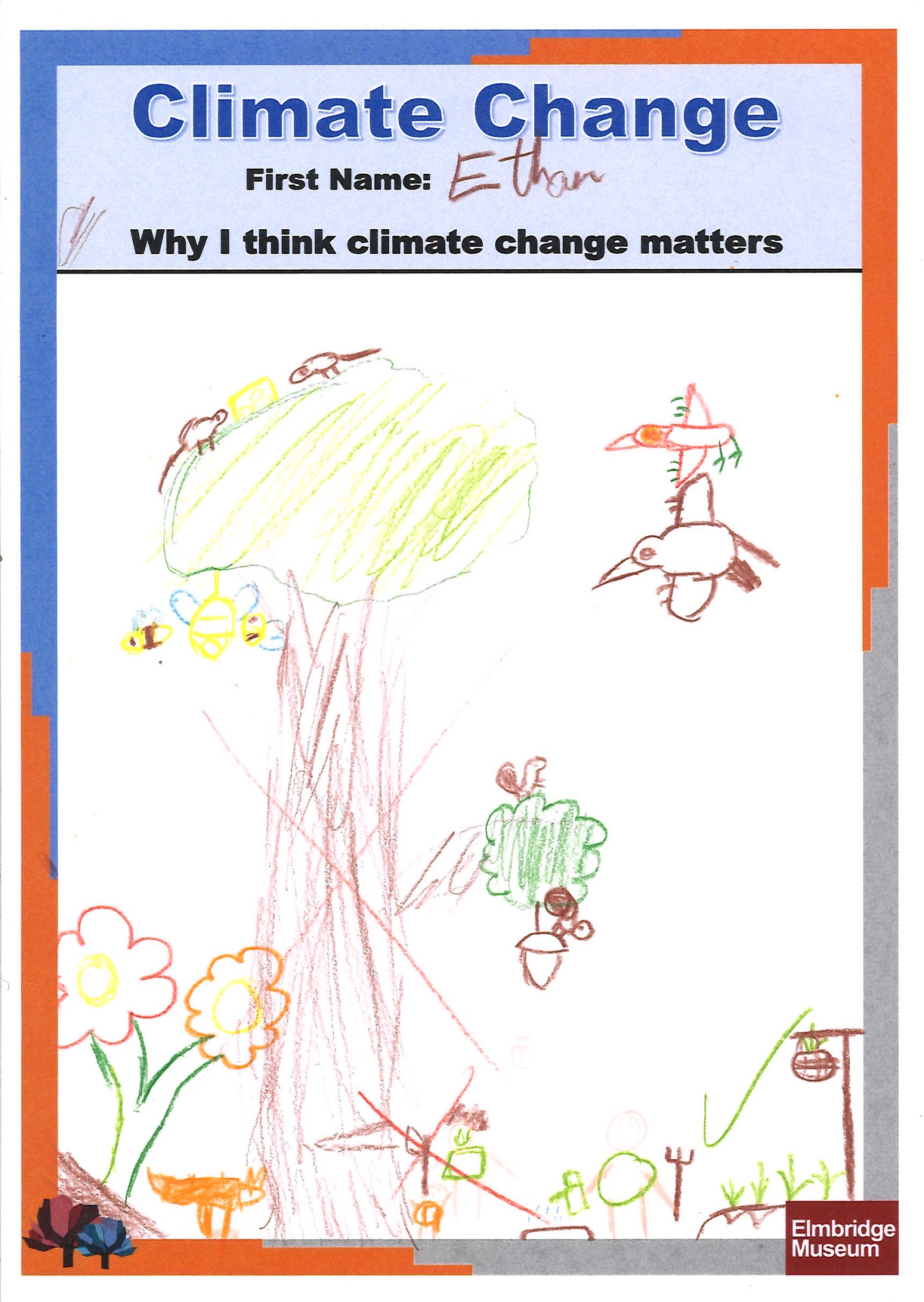 Climate Change Year 6 at Hinchley Wood Primary School have used items in Elmbridge Museum’s collection to learn about how our historic local environment differs from today. The result is 83 fantastic posters, which answer the key question: “Why does climate change matter?”

read more
Extreme Weather How can extreme weather affect people’s lives locally, and what can we do to prevent this in future?

read more
Transport How does climate change relate to transport, and how have our local transport habits changed over time?

Share your thoughts on climate change and the local environment, or submit your own poster!