Air Raid Precautions (A.R.P.) Album of Cigarette cards of national importance’ which were meant to offer help and guidance to civilians at home in the war.

On the outside, the Air Raid Precaution book is dull.  But open it up, and dazzling colours jump from the page in dozens of intricate drawings.  Who would’ve thought this plain-looking book could hold so many treasures, perfectly preserved in all their former glory?

The joy that simply lifting the cover brings is not unique – it’s the same story with dozens of other items in Elmbridge Museum’s collection.  Unlocking the bright, complex history that’s hidden within so many of our items was my main aim when planning the Second World War exhibition.  The exploration of artefacts is an activity which should be enjoyed by everyone, not just museum staff working behind the scenes.  Yet this immediately throws up the question: how to do it? 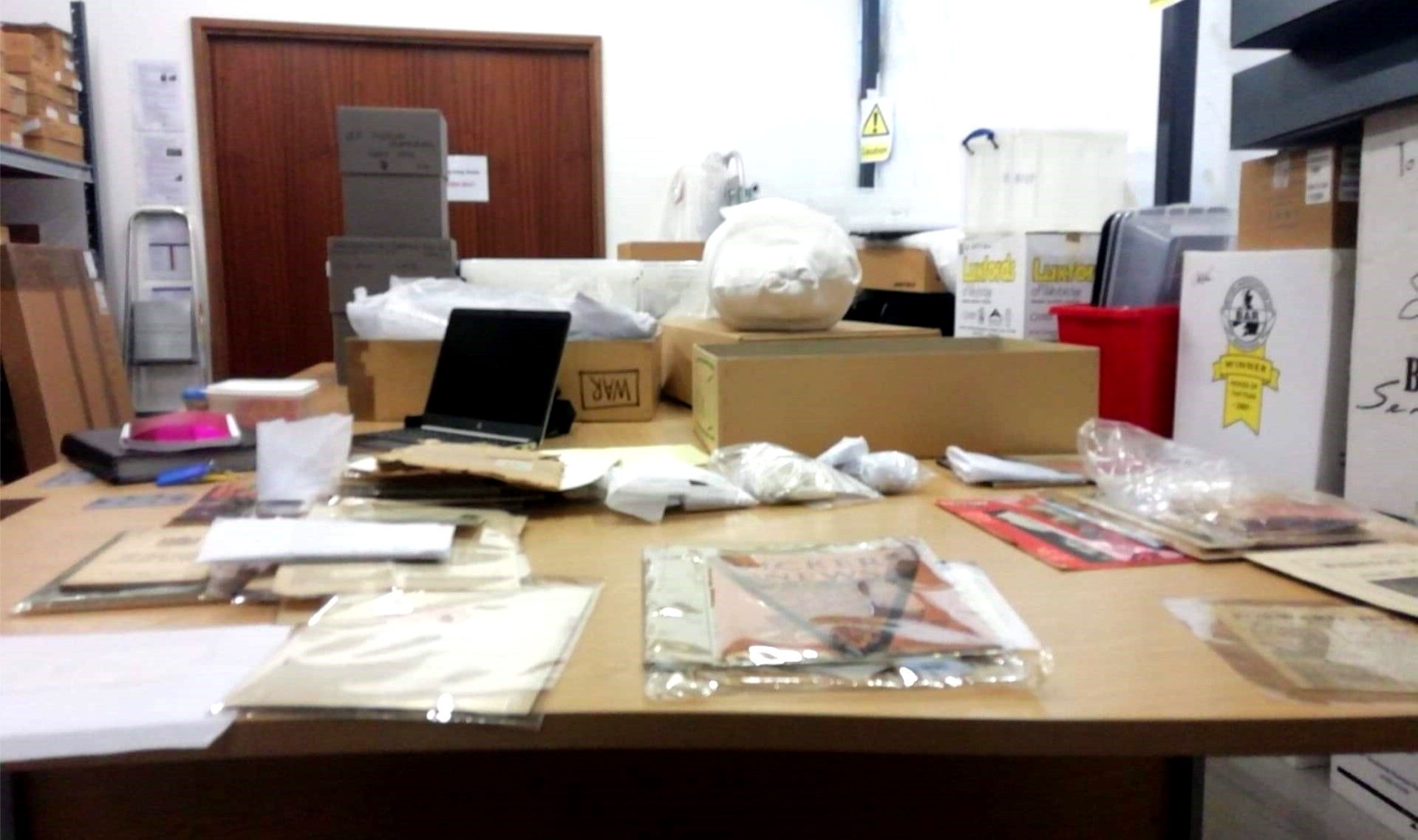 The mountain of Second World War boxes in the Museum archive

I first walked into our stores eagerly clutching my long list of object accession numbers and ready to plan the exhibition.  Two hours later, and faced by a mountain of boldly marked ‘WW2’ boxes, I was less enthusiastic.  How on earth was I going to whittle down this treasure trove to just a handful of items for display?  The answer: videos.

Despite their many strengths, exhibitions are far from perfect.  They place items behind glass, to be looked upon one-dimensionally and statically, rather than investigated.  By divorcing objects from their context and presenting them from a simplistic perspective, do exhibitions provide a completely authentic insight into each object?
The prevalence of this challenge to museums is reflected by the fact that many are progressively doing more to enable the discovery of intricacies within their collections. 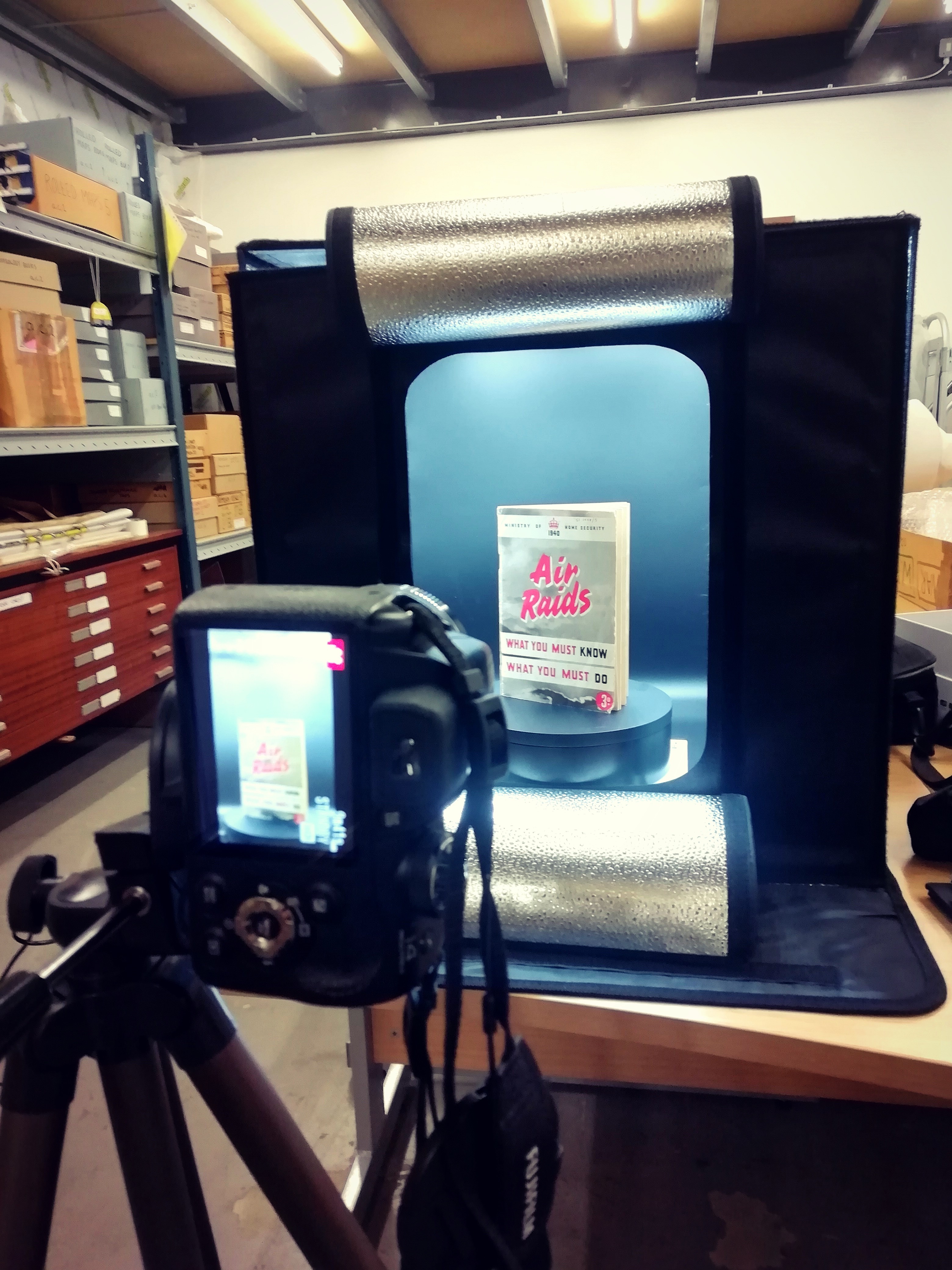 An object being photographed

Approaches like that undertaken by the British Museum are extremely effective.  This institution uses video guides alongside its exhibitions to give visitors a 360 degree picture of artefacts.  They allow users to examine the object from any and every angle as if they were handling it – all without any damage to the object itself.  They’re simple to produce and accessible to virtually anyone.  It was this idea that came to mind when I began my exploration of Elmbridge Museum’s Second World War collection.

An object video would allow me to present many more items than I could fit in our display case, providing further information and resources which would still be accessible once the exhibition itself was over.  With this in mind, I ordered a vast array of video recording equipment and set to work.

A lightbox would allow the clear and uniform presentation of objects, with the same backing and lighting to each recording.  Additionally, while I didn’t have the resources for an interactive video on the scale of the British Museum’s production, a rotating platform would work just as well by allowing me to record a complete revolution of the objects rather than just the front of them.  I’ve now recorded around 20 extra items, ranging from gas masks to cartoon books.

Although a simple concept, the object videos will enhance the availability of Elmbridge Museum’s wonderful Second World War collection.  What’s more, it’s a strategy which is here to stay: there’s no doubt that similar videos can be produced time and time again for future exhibitions and projects.  They will offer anyone and everyone a free pass into our archives, and provide access to real history from the comfort of the sofa.

Explore the 'Elmbridge at War: The Blitz in our Borough' exhibition where you'll find more Hidden Treasures films, first-hand memories, Curator's talk and more... Elmbridge At War
We use cookies on our website to provide you with a better experience. See our privacy policy for further information. OK