Take a look below to see the children of St. Charles Borromeo’s imaginative and varied interpretations of this photograph! 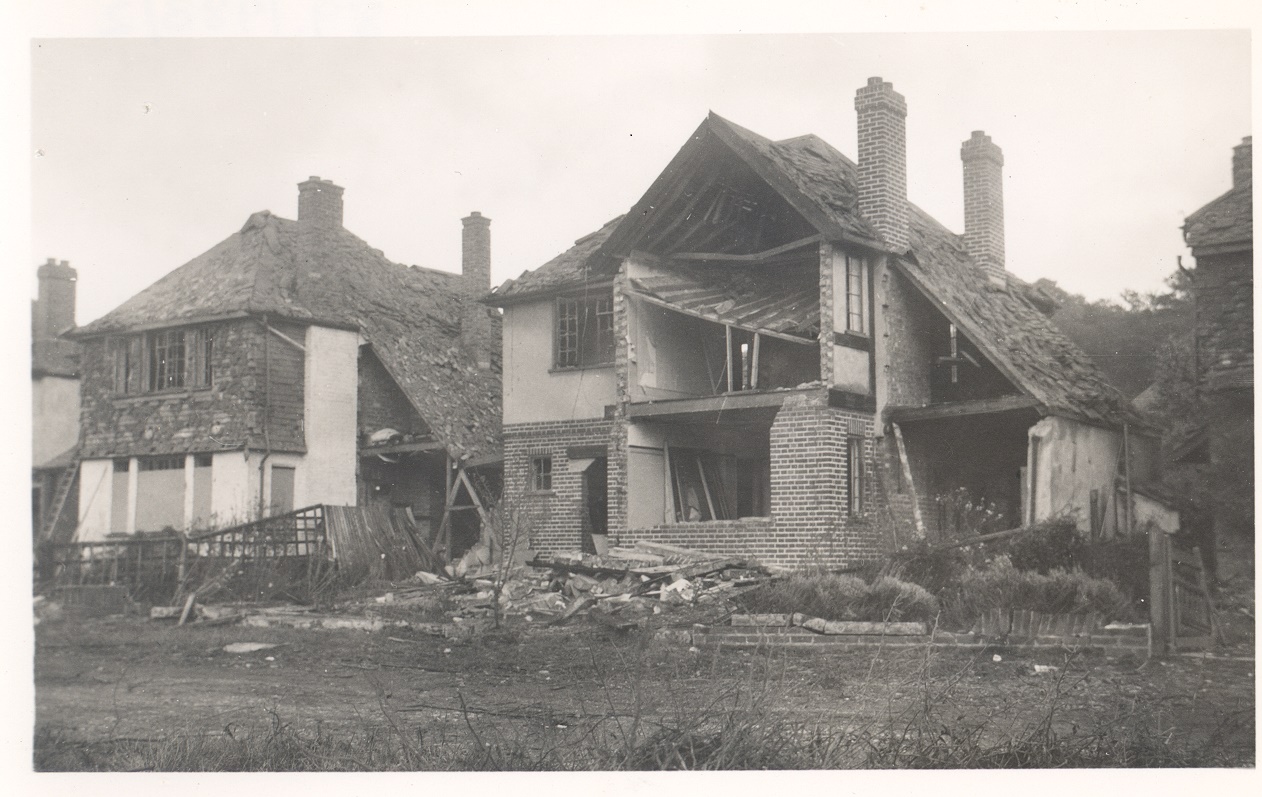 This black and white photograph from 1944 shows Nos. 51 and 53 Greenways, Hinchley Wood after a VI Flying bomb exploded nearby. You will see No. 53 has no side walls, and the tiles on both roofs have been shattered. 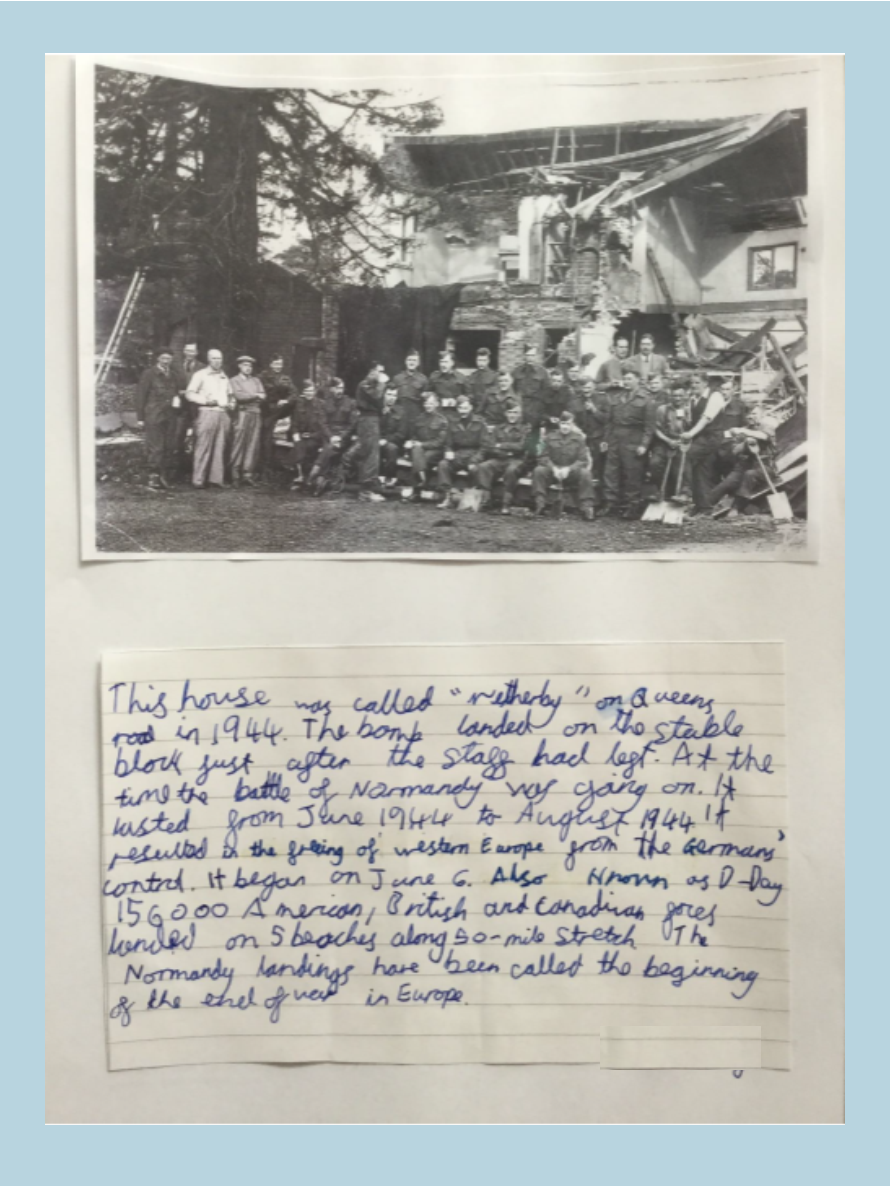 Eva has discovered the story behind a photograph she found of a bomb damaged house. She has also written a brilliant description of the D-Day landings in a museum-style label.

“This house was called “Wetherby” on Queen’s Road in 1944. The bomb landed on the stable block first after the staff had left. At the time the battle of Normandy was going on. It lasted from June 1944 to August 1944. It resulted in the freeing of Western Europe from the Germans’ control. It began on June 6. Also known as D-Day 156000 American, British and Canadian forces landed on 5 beaches along 50-mile stretch. The Normandy landings have been called the beginning of the end of the war in Europe.” 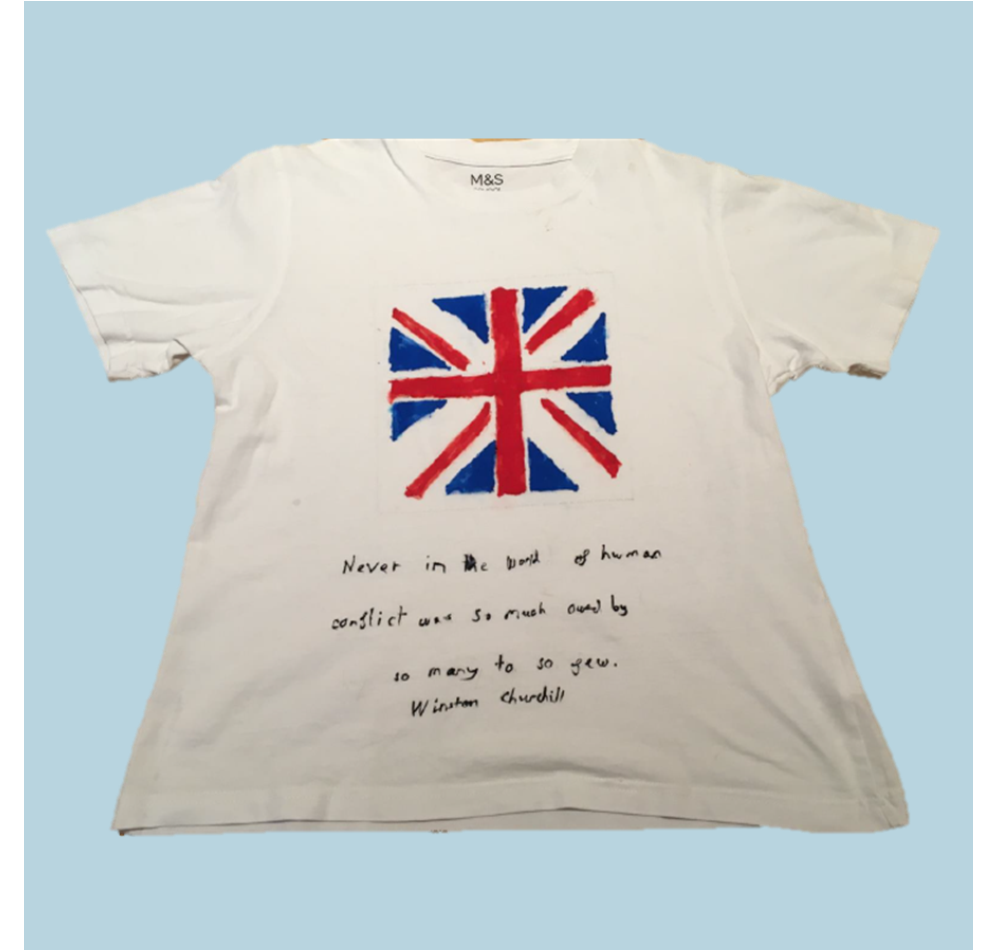 Nathan has created this incredibly imaginative response to the photograph. He has made a VE Day t-shirt complete with a drawing of a Union Jack in fabric markers, and has even included a quote from one of Winston Churchill’s speeches!

“Never in the history of human conflict was so much owed by so many to so few. 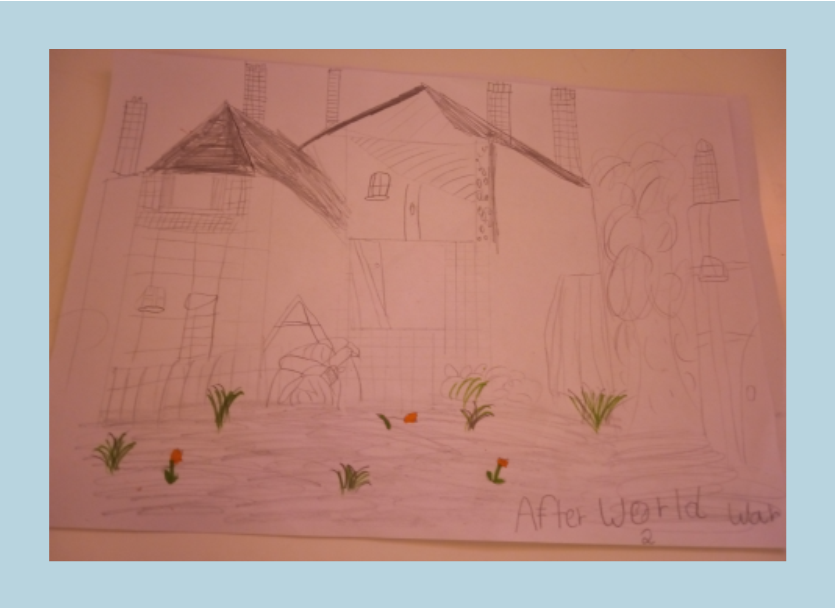 Heidi has drawn a picture of the bomb damaged houses in Greenways using coloured pencils. Your eye is drawn to the green and red flowers in front of the houses, a fantastic symbol of the hope and regrowth after the devastation of the Second World War. 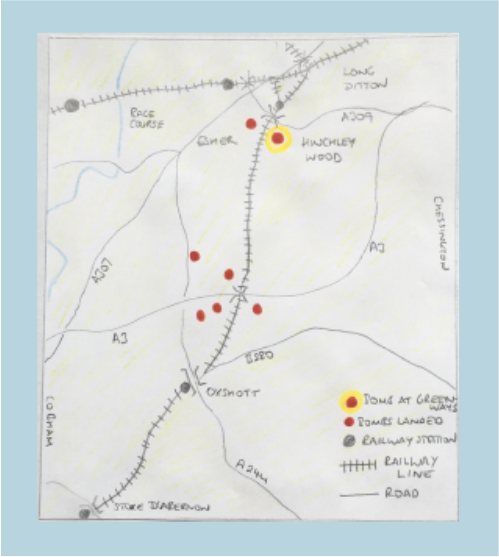 Paolo has done some brilliant research into the why so many bombs fell in Elmbridge and has even created this fantastic map so we can see exactly where they fell. He has written a detailed description of the effects of the Battle of Britain on Elmbridge, including an account of a bombing at the Vickers factory in Weybridge, which would fit into a museum exhibition very well!

“When I saw a picture of the houses that had been bombed on Greenway road I decided to research to know more about it as the picture was all shocking and real. I was amazed by how many bombs had landed in this area even if we are outside London, which was the main target for German bombers.

Looking at a map of where the bombs landed in the area you can probably tell that the bomb that caused the destruction shown in the picture was meant to hit the nearby railway line or even the train station. In Greenways one of the pictures show number 51 & 53 left in devastation because a bomb had been dropped nearby

and so they were left in pieces. If you look at the map where the bombs fell you will see that night time bombs fell between 7th Oct 1940 – June 6th 1951.

However, the worst incident of The Battle of Britain in Surrey happened at Brooklands on 4th September 1940.

Brooklands was where Vickers and Hawker’s had their factories. In them they were making the Wellington bombers and the Hurricane fighters. The race track was still visible from the air.

On that day, just after lunch, a fleet of Messerschmitts from the Luftwaffe attacked the Vickers building, causing damage to the hanger, killing 83 people and wounding more than 400 people. Production of the aircraft only stopped for a few days, and while the factories were being repaired, local shops and garages were used to make the aircraft.

The Wellington bomber and the Hurricane were very important allowing Britain to get through the Battle of Britain and then win the war.”

Lauren has done some fantastic research into important facts about the Second World War and has linked this to her own family history!

“WW2 began when German troops invaded Poland on 1st September 1939. 75 MILLION people DIED in WW2. My 2 Great Grandads were in the War.

Malta was the most bombed country in World War 2.

My Mum’s Dad Brian was evacuated. 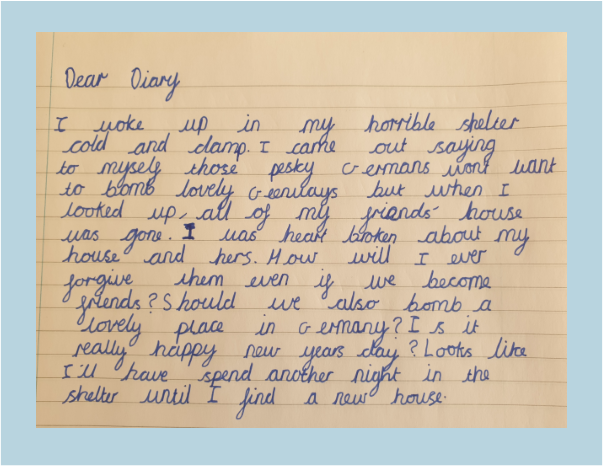 Sofia has brilliantly imagined what it would be like to wake up on Greenways Road the morning after this air raid in this diary entry. She explores how a child in the war might have felt if their house was bombed, and the questions they would have had.

I woke up in my horrible shelter cold and damp. I came out saying to myself those pesky Germans won’t want to bomb lovely Greenways but when I looked up, all of my friends’ house was gone. I was heart broken about my house and hers. How will I ever forgive them even if we become friends? Should we also bomb a lovely place in Germany? Is it really happy new years day? Looks like I’ll have to spend another night in the shelter until I find a new house.” 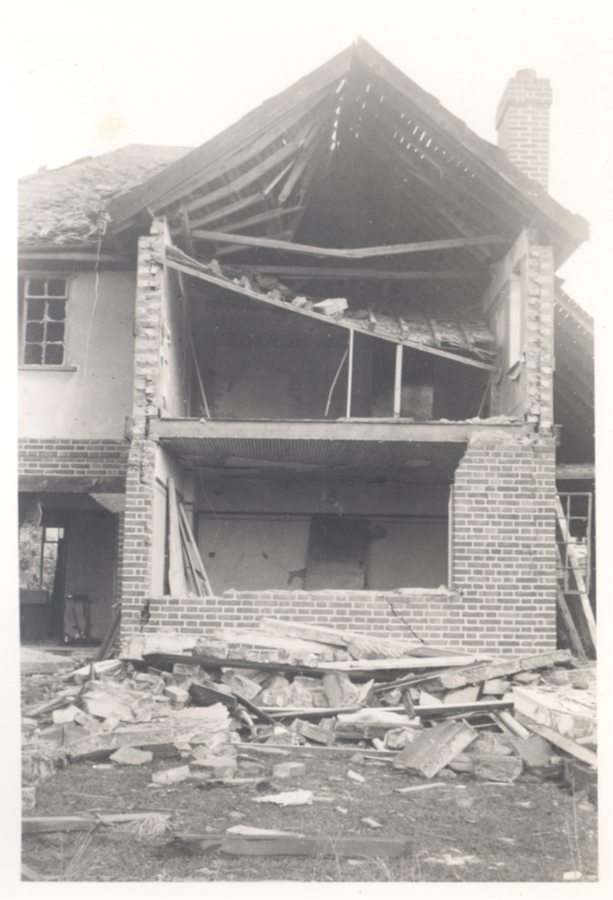 This close-up photograph of No. 53 Greenway, Hinchley wood shows the roof practically demolished and no glass in the windows.

Molly has written a beautiful poem in which she considers the complex emotions some families would have felt on VE Day.  She recognises that although it was a happy day, things didn’t  immediately change for everyone.

“On VE Day we celebrate that the war had come to an end,

But some came home from war to nothing at all;

Children had to stay evacuated as there was no place to go,

They were separated from family which must have made them feels so lost,

The children as well as parents

must have missed each other so.

Everything they had worked for was gone,

They had to start again.

If it was me, I would be feeling so much pain.

The kids must have felt there was no one who would understand the feelings they had,

and never expressed which must have made them feel empty and sad.”

Malachy has uncovered this fascinating story about a young girl who was evacuated with her Mum from Hinchley Wood. This is a story which would add much to a museum exhibition.

“We found a house bombed in world war 2 on Google and found a story about a little girl who was evacuated from Hinchley wood. She was 4 years old at the beginning of World War Two and was evacuated to Devon with her mum. Eventually she went back home and went back to school. She was frightened when the siren went off and rushed to take shelter. On May 8th they heard that the war had ended and went out to celebrate on the street.”