Take a look below to see the children of St. Charles Borromeo’s imaginative and varied interpretations of this object! 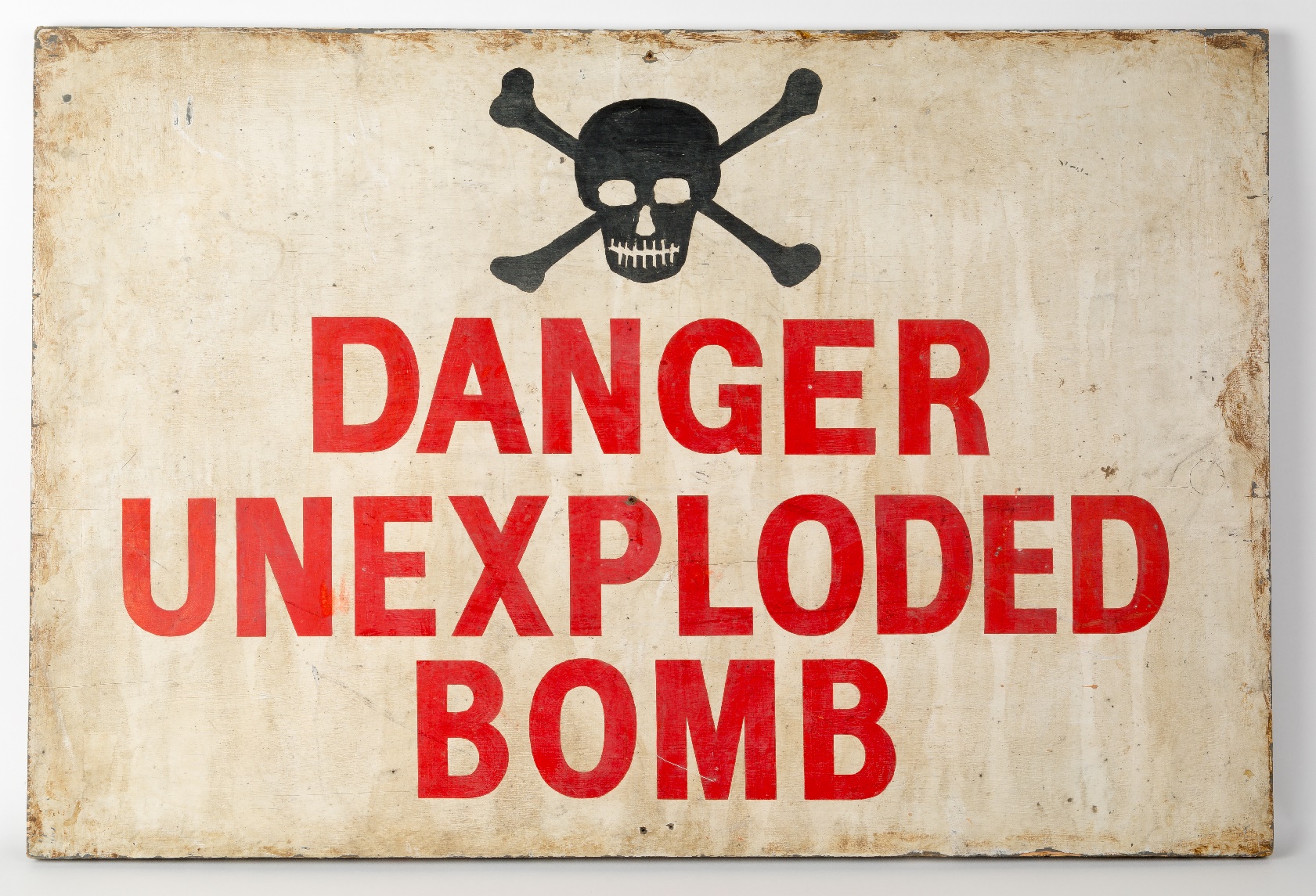 This is a board with red lettering and black skull and crossbones saying “DANGER UNEXPLODED BOMB”. Signs like this were used to warn passers by of the dangers posed by unexploded bombs. 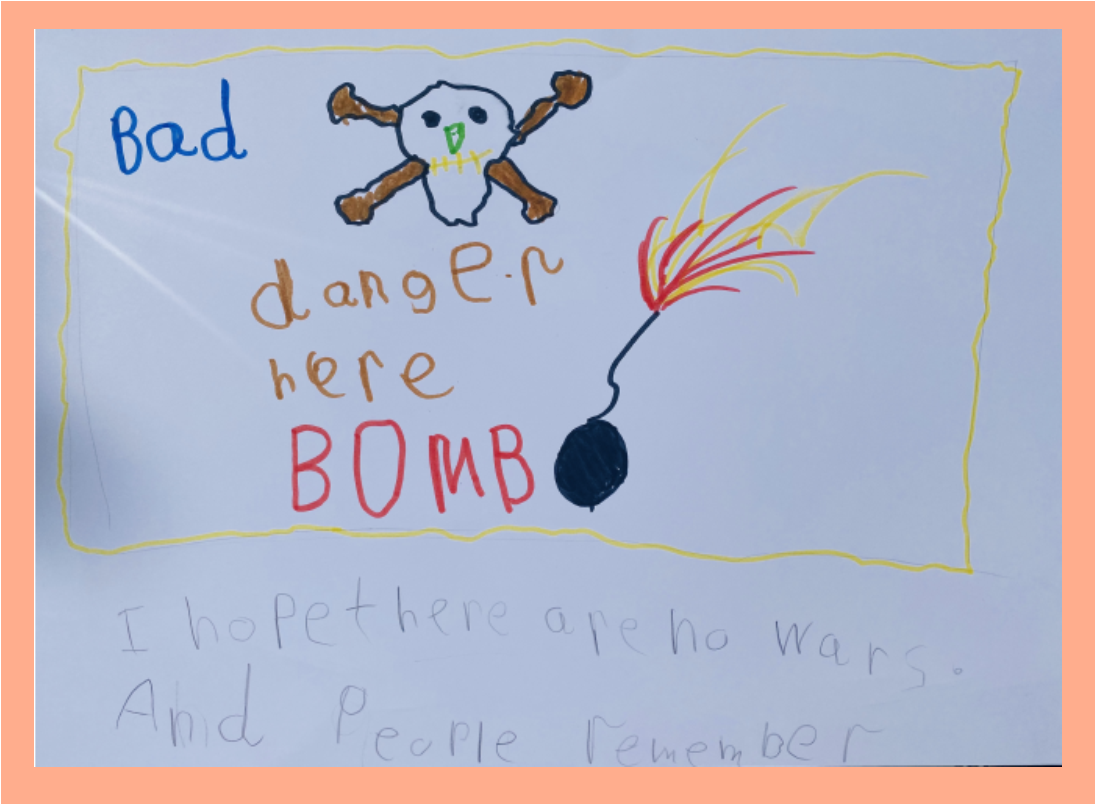 Amelie has brilliantly recreated our ‘Danger, Unexploded Bomb’ sign. She has used bright yellow and red colours and even drawn a picture of a bomb so we know to keep away from danger.

I hope there are no wars and people remember.” 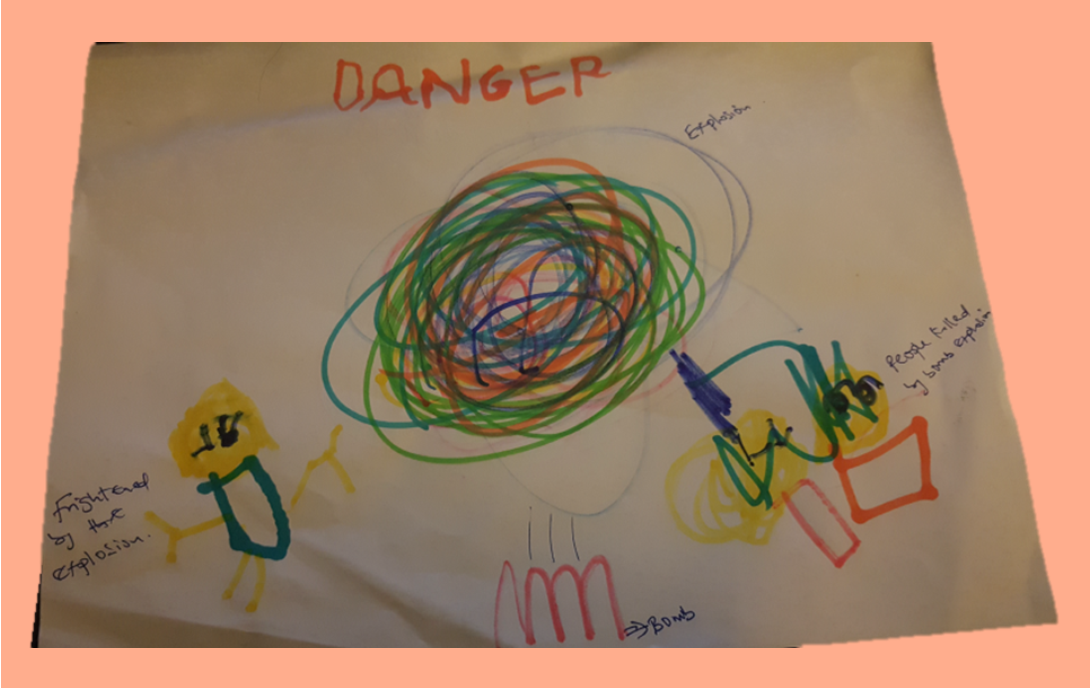 Chimnemelum has designed a new warning sign. She warns us of the danger caused by unexploded bombs by showing us what would happen if the bomb did explode.

Her colourful picture features a bomb, an enormous explosion and frightened people running away from the explosion. She has also written “DANGER” across the top of the page in bright red letters. 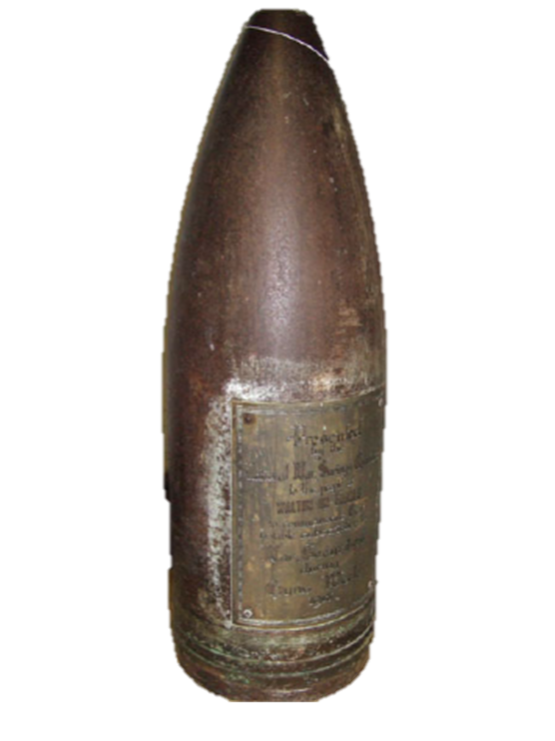 In this brilliant diary entry Daniel has used the unexploded bomb sign in the context of the modern day. He has imagined what would happen if you discovered a bomb from the Second World War the day before the 75th anniversary of VE Day!

Today was scary and equally exciting! It all started when I was taking a walk on Esher Common when I saw something behind the trees which looked like metal. I felt inquisitive and decided to have a closer look. The object behind the trees looked like a bomb shell. At first I was confused as to what it was doing here and then I started to freak out. I then ran back home quickly and called the Police Department who put me on the phone to the Bomb Disposal Squad.

In less than half an hour along with the police the bomb squad arrived in a bullet proof truck. Suddenly men started jumping out and brought out metal detectors and lots of other equipment. They set up a parameter with tape around the object as a crowd had now begun to gather. Before long they completed some checks and told me it was an

unexploded WW2 bomb and it was good I found it but also that it hadn’t exploded so far and harmed anyone. They told me that they were going to take it to a secure site where they could set the bomb off.

Just before they left they congratulated me for finding the bomb and calling them as it was the right thing to do. When I got back home I told my family all the news and they too were proud of what I had done and congratulated me. Later on, I even got a call from the local Surrey newspaper to say they would like to come and speak to me next week to write a story and take my picture. I feel very proud of myself and I will always remember this day where I saved lives.” 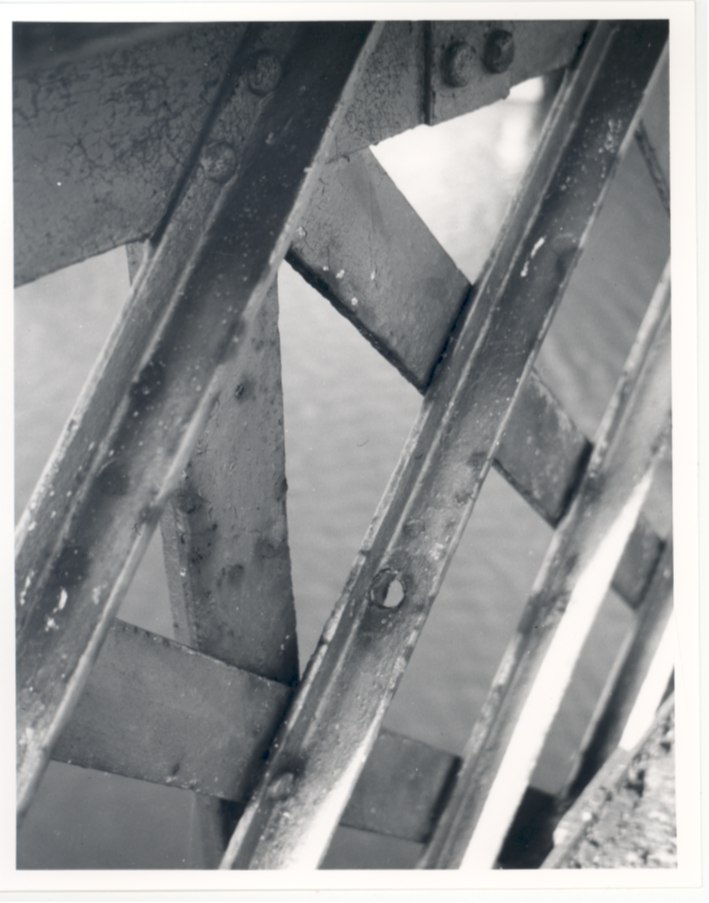 Joshua has written this brilliant poem about the terrifying experience of watching a bomb land on the road outside your house. He vividly describes what the response of children in the war might have been, and how the unexploded bomb sign would have been used.

It twirled down from the sky

And landed in our road.

Luckily for all of us

It did not explode.

Warning us to stay away

So on our street

My friends and I could not play.

We could play elsewhere though

And nobody had died.

Lots of other bombs did explode

And many families had died.” 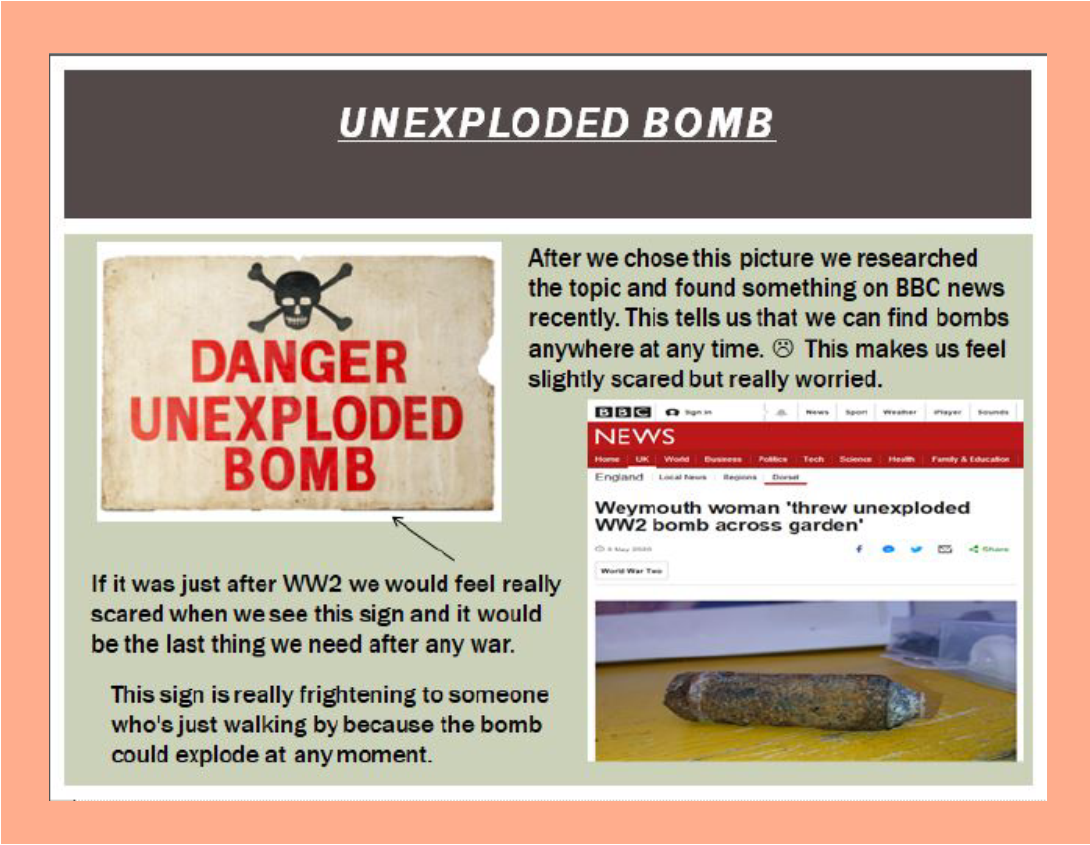 Anthony and Joseph have done some fantastic research and created this informative poster about modern day bomb discoveries. They have also thought about how people in the Second World War might have felt if they saw the sign.

Let’s hope we don’t discover any unexploded bombs in Elmbridge!

“After we chose this picture we researched the topic and found something on BBC news recently. This tells us that we can find bombs anywhere at any time. This makes us feel slightly scared but really worried.

If it was just after WW2 we would feel really scared when we see this sign and it would be the last thing we need after the war.

This sign is really frightening to someone who’s just walking by because the bomb could explode at any moment.” 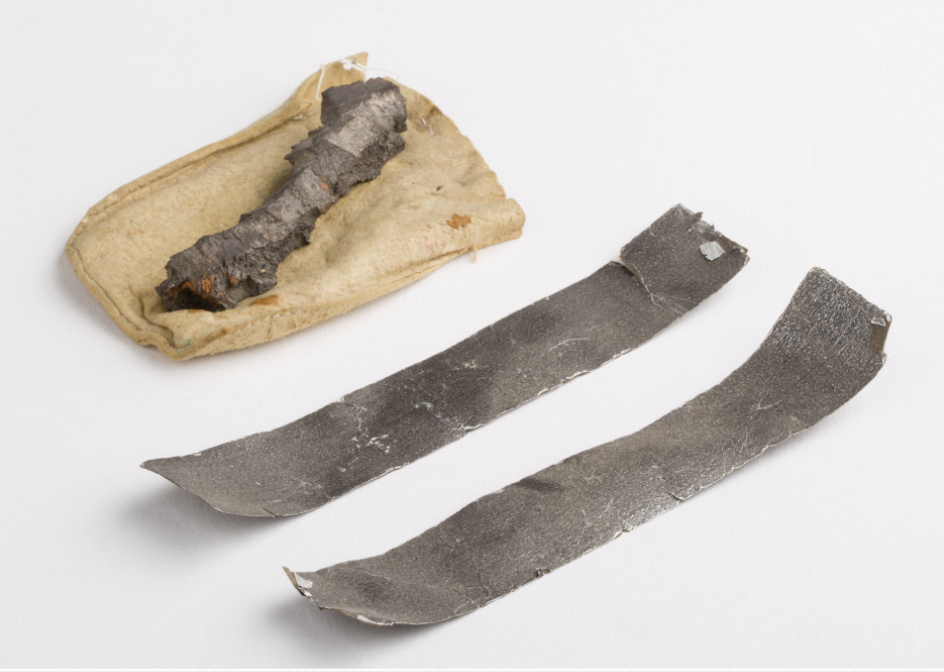 Alessandro has vividly described the dangers posed by unexploded bombs and has given us clear and informative instructions about what we should do if we ever come across one!

Never go in fields to party. You could explode if you jump on one. And exploded means you are teared to pieces. And it’s strange if you see a hole and body parts teared it wouldn’t be a wonderful sight. 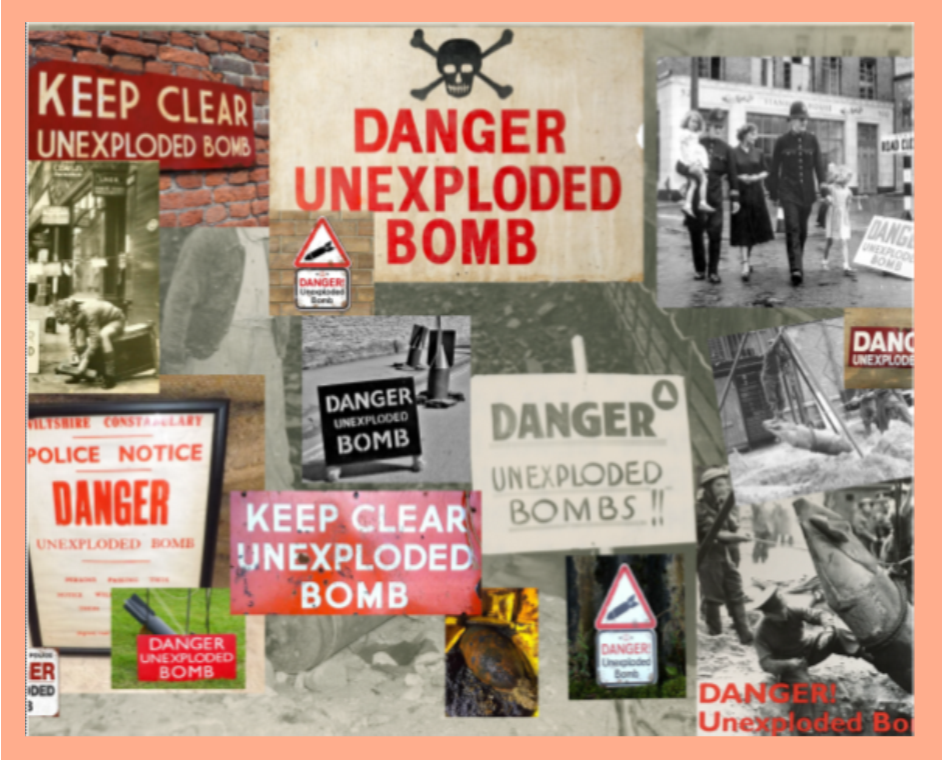 Matthew has researched lots of different warning signs from the Second World War and used them to create this incredible collage. It is very interesting to compare signs from other museums, and get a better idea of the range of bomb warnings people had in the 1940s. 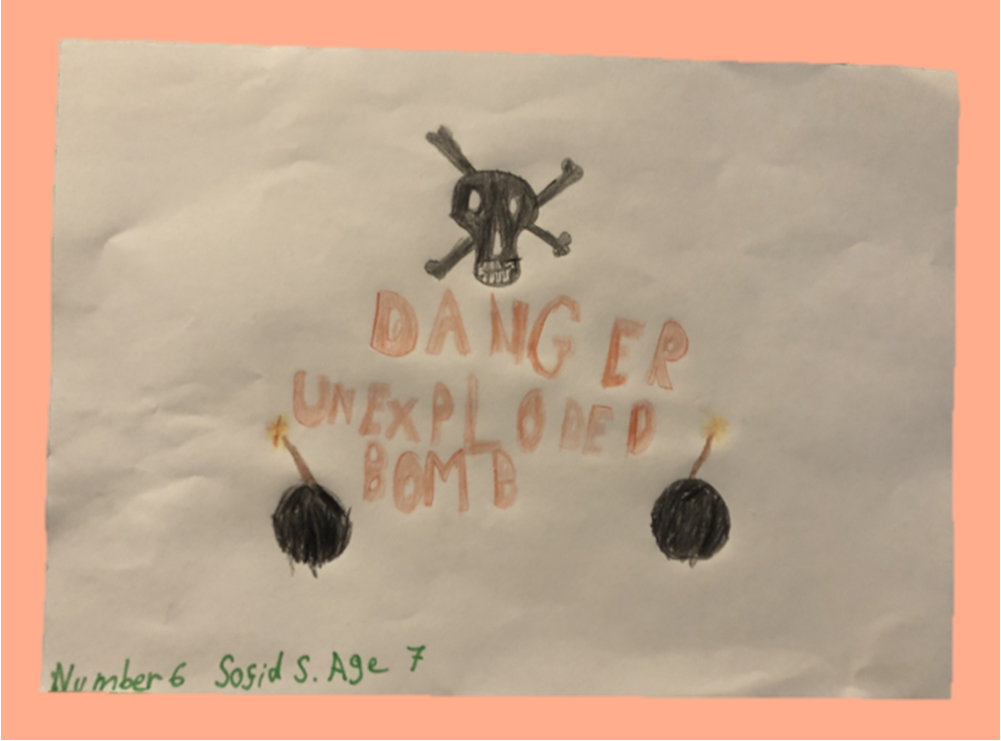 Sofia has drawn this fantastic recreation of our ‘Danger Unexploded Bomb’ sign. She has written the message in bold red letters, and has added a picture of two bombs to make the message even more clear! 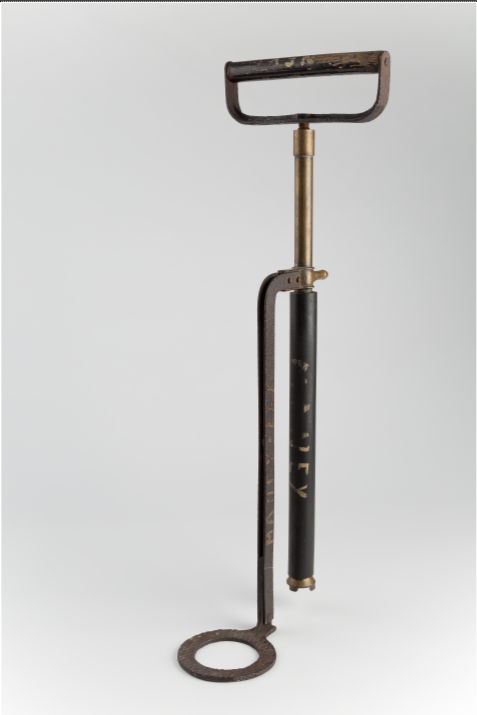 Molly’s fantastic poem captures the excitement caused by discovering a bomb, but also the need for people to keep calm and carry on in the Second World War. It gives a good idea of the range of thoughts people might have had if there was an unexploded bomb in their road.

“There’s a bomb in the ground,

that has just been found.

It’s unexploded and could go boom,

We need to clear the area soon.

The Army needs to make it safe

By defusing the bomb and putting it in a case.

They then need to take it far,

Where the bomb can do no more harm.

Everyone can go back in their home

Things go back to normal in the zone.” 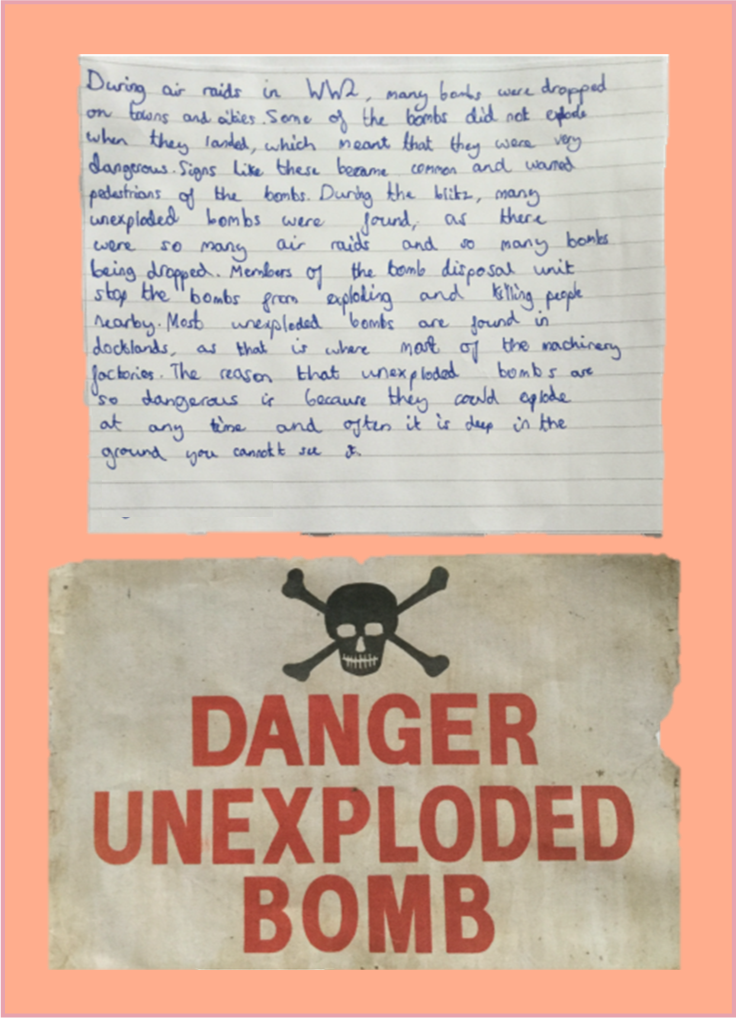 Ben has thoroughly researched unexploded bombs and why signs like this were created. His fantastic description of unexploded bombs includes fascinating facts such as where they are most commonly found in London and why they are so dangerous.

“During air raids in WW2, many bombs were dropped on towns and cities. Some of the bombs did not explode when they landed, which meant that they were very dangerous . Signs like these became common and warned pedestrians of the bombs. During the blitz, many unexploded bombs were found, as there were so many air raids and so many bombs being dropped. Members of the bomb disposal unit stop the bombs from exploding and killing people nearby. Most unexploded bombs are found in docklands, as that is where most of the machinery factories were. The reason that unexploded bombs are so dangerous is because they could explode at any time and often it is deep in the ground and you cannot see it.” 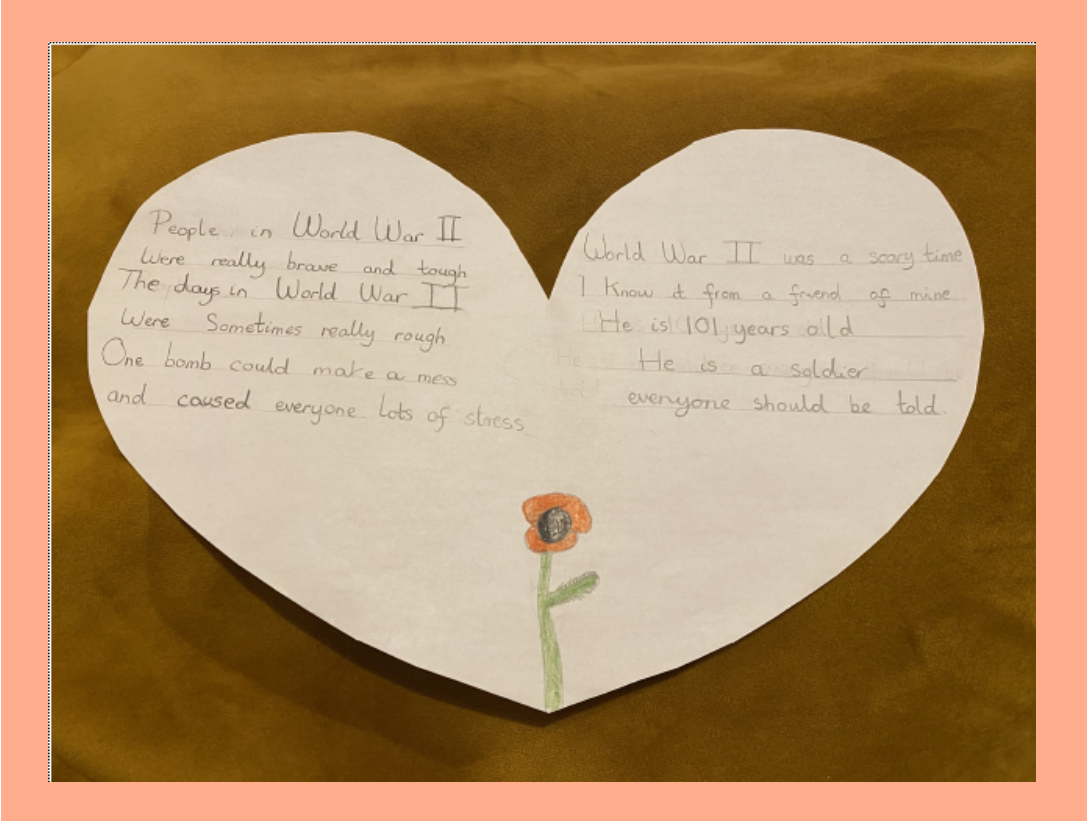 Nina has written this lovely poem describing the difficult times people lived through in the Second World War. Her descriptions importantly point out the mental strain heavy bombing could cause, as well as the physical damage. She has written her poem on a heart and drawn a poppy, reminding us to care for others and think about the people who bravely fought and gave their lives for VE Day to be achieved.

Were really brave and tough

The days in World War II

Were sometimes rather rough

One bomb could make a mess

And caused everyone lots of stress

I know it from a friend of mine

He is a soldier

Everyone should be told.”