Society had long classed women as too delicate to be involved in the ‘masculine’ realm of politics. 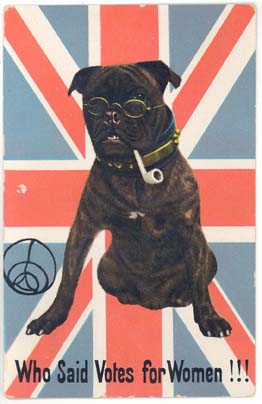 One of two Political satirical cards of the suffragette period - Bulldog with superimposed spectacles and pipe, against a Union Jack background. Caption 'Who said votes for Women!!!'.

Until the nineteenth century, women had been defined as mothers, wives and keepers of the house. Women’s suffrage became a serious topic of debate in the mid-nineteenth century when educated women, and philosophers like John Stuart Mill, began to question the inequality of the sexes.

Women began to campaign peacefully for the right to vote.  If they were subject to the laws of men, why should they not be allowed to vote for their representatives in parliament?

Campaigning progress was slow and at the turn of the twentieth century, the Women’s Social and Political Union was founded by Emmeline Pankhurst and her daughters. The ‘Suffragettes’, as they were dubbed by the Daily Mail, used more violent and direct methods of campaigning for the vote.  They claimed that “deeds not words” would get results.

This exhibition explores the history of the suffragettes and highlights the stories of significant women from early twentieth century Elmbridge in the fight for suffrage. It originally complemented a display at the Civic Centre in Esher High Street (January – July 2018), celebrating 100 years since some women over the age of 30 finally secured the vote in Britain. 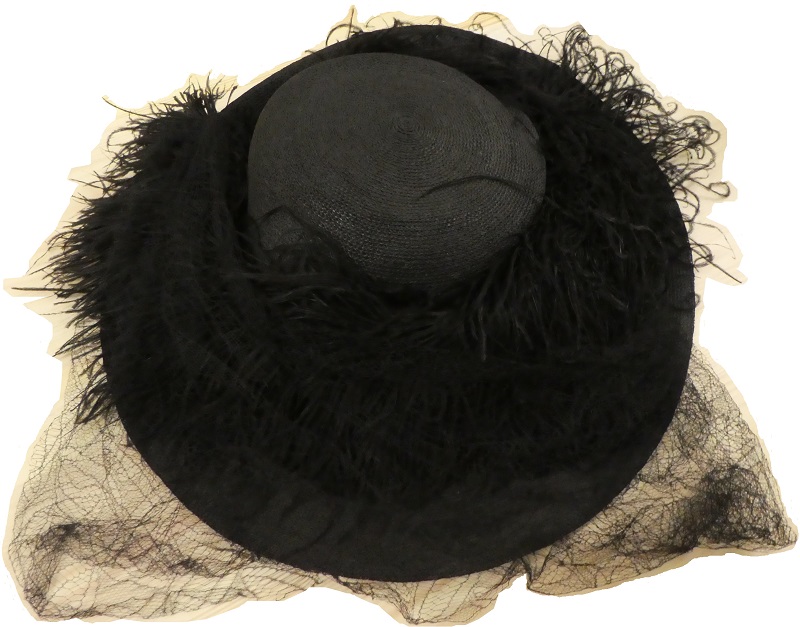 Hat made of silk-lined straw and is trimmed with black net and feathers. It was worn at ‘Black Ascot’, which was an event that commemorated the death of King Edward VII in May 1910.

Large hats with wide, upturned brims like this one were popular around 1909-10.

This hat is made of silk-lined straw and is trimmed with black net and feathers. It was worn at ‘Black Ascot’, which was an event that commemorated the death of King Edward VII in May 1910.

This navy blue ‘costume’ dating from 1910 consists of a black worsted jacket with crepe collar and a skirt of heavy twill weave.

This navy blue ‘costume’ dating from 1910 consists of a black worsted jacket with crepe collar and a skirt of heavy twill weave.

At the beginning of the twentieth century, new pursuits for women like golf, cricket, hockey, skating and fishing, meant that fashion needed to be more practical. Skirt and jacket combinations like this one were sported by many women of the period because they had more freedom of movement than in the bustled dresses of the 1890s.

Photographs of female suffrage campaigners show that many suffragettes wore outfits like this.

This black lace parasol lined with white silk was a stylish accessory for summer months in the 1900s. It would have been carried tightly rolled when not in use and could also double-up as a walking stick. 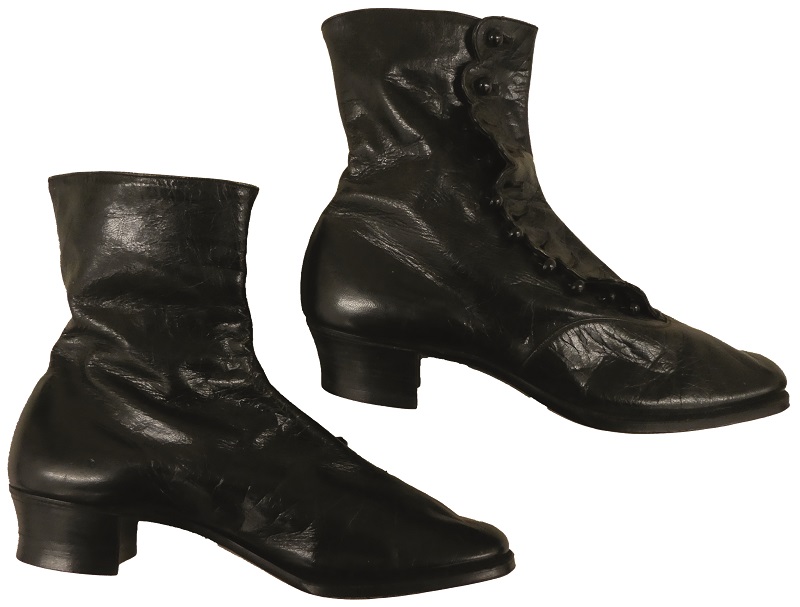 Leather boots with button-down sides and a scalloped edge were popular in the 1910s. These are known as 'Alice Ruffle's Boots' and were kept under the counter at her Weybridge store as a good luck charm.

Leather boots with button-down sides and a scalloped edge were popular in the 1910s. With 10 buttons per boot, these must have been impractical to put on in a hurry!

These boots are known as ‘Alice Ruffle’s Boots’. In 1918, Alice Ruffle was summarily dismissed as the acting manageress of Frisby’s shoe and boot shop at 8 Baker Street. This was a common occurrence after the end of the First World War. Unemployment had skyrocketed on the return of men from the army, and many of the women who had stepped into jobs while they were enlisted were consequently let go.

The recently widowed Alice therefore set up her own shop here, at number 41. She sold shoes and boots, in competition with Frisby’s, and it quickly became a hit with local shoppers. These boots were among the first stock purchased by Alice, and always kept under the counter as a good luck charm.

Learn more about Alice in our High Street Heritage Trail.

This sash is a reproduction of a ‘Votes for Women!’ sash. It has been made with the Suffrage campaign colours of green, purple and white, and is similar to what we know women campaigning for the vote would have worn.

Fighting For Women's Rights To Vote

The road to women's suffrage in Elmbridge

Satirical cards like these were distributed widely to spread the message of women’s suffrage. Both date from between 1908 and 1910 and highlight the absurdity of gender stereotyping.

The bulldog’s firm stance against the Union Flag could suggest that he is representative of male anti-suffrage politicians. The sphere above his right foot symbolises the ‘sphere’ of woman, meaning she is contained to a domestic life and not fit for politics.

The kitten in the other card looks as though it should be harmless and feeble, but has puffed up its fur and hisses in front of the WSPU colours. The kitten stands in for the suffragettes who made women appear fierce. The violence of the suffragettes was seen to be unladylike by many because it had long been argued that women were too sensitive for politics and conflict.

Kitty Marion burned down the grandstand at Hurst Park Racecourse in June 1913. This was in response to the death of suffragette, Emily Davison, who was trampled under the King’s horse after walking onto the racecourse at the Epsom Derby earlier that year. As punishment for arson, Marion was imprisoned for three years. She went on hunger strike which resulted in her being force-fed and she was then released under the ‘Cat and Mouse Act’ after a meagre four months.

The Outbreak of War

The WSPU ceased their militarism at the outbreak of the First World War and began campaigning for compulsory conscription, which was introduced in 1916.

The suffragettes endorsed the national shaming of conscientious-objectors (men that refused to fight because they disagreed with war). Many women joined in the movement to hand out small white feathers to men who were not away at war. The white feather campaign against cowardice was controversial because there are recorded instances of feathers being given to injured soldiers or those sent home on leave from the front line.

The Woman's Book', published in 1918, boasts that it "Contains everything a woman ought to know". Amongst other topics, it has sections on Household Management, Cookery, Children, Home, Dress, Careers and Politics.

The photograph shows the ‘Women in Politics’ section which lists the many suffrage groups and suggests that women should take an active interest in politics.

A shortage of men meant that women across Britain were needed to fill jobs on the Home Front, like these munition workers at the Gordon Watney & Co Factory in Weybridge. They are pictured here lined up whilst George V and Queen Mary drive through on their visit to the factory. The female workers wore plain pinafores and caps to protect their clothing and hair when they were carrying out the dirty work. This factory specialised in making motor vehicles in peace-time but helped to manufacture aircraft engines and bullets during World War One.

Women make up most of the workforce at the Weybridge Post Office in this photograph. They wear ankle-length skirts, wide-brimmed bowler hats, long double-breasted jackets and boots. This uniform was hardly a fashion statement! It is a far-cry from the sweeping hats, pretty blouses and tailored two-pieces worn in the Edwardian period.

Queen Mary talking to one of the many female workers in a machine workshop at the Gordon Watney & Co Factory, c.1914-18. 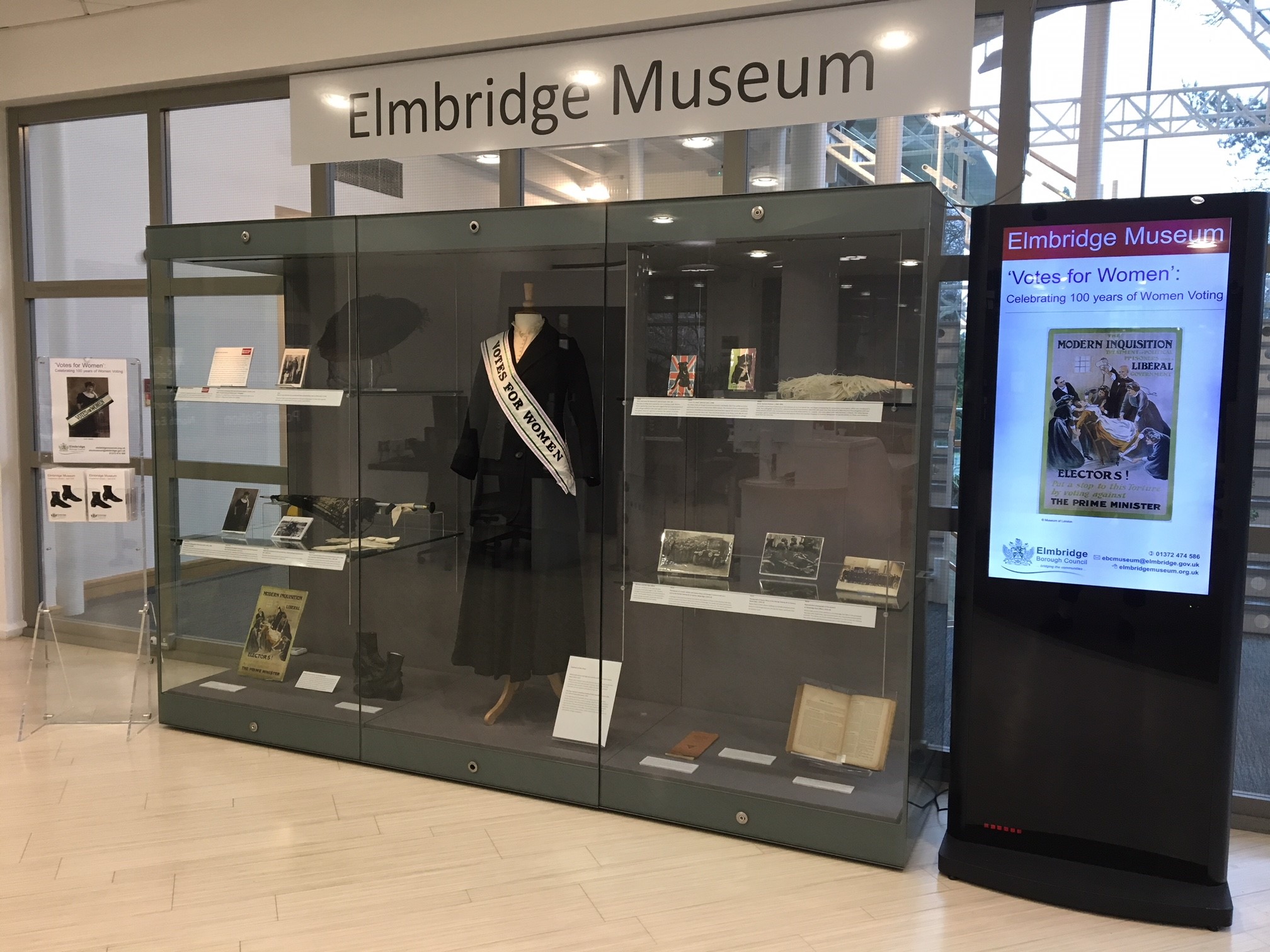 'Votes for Women!' exhibition at the Civic Centre, Esher, in January 2018.

The Impact of Women's Rights Activists on Politics

Women’s contribution to the war effort from 1914-18 helped to secure the suffragettes the vote. The Representation of the People Act of 1918 finally allowed all women to vote who were over 30 and met property qualifications. The same Act also allowed men over 21 the right to vote.

It was not until 1928 that the Equal Franchise Act allowed all men and women over 21 to vote.

Interested in learning more about protest in Elmbridge? Take a look at our next online exhibition, 'Look Back in Anger', which charts the history of protest groups from the Diggers of the 17th Century, through to the Suffragettes and the modern day.

See the Look Back in Anger exhibition

Let us know your thoughts on the historic Women's Suffrage Movement in Elmbridge.

The Wrens of Oxshott We revisit the remarkable lives and works of Denise and Rosemary Wren - hugely significant mother and daughter potters who lived and worked in Oxshott. Their works are both famous and trail-blazing in the world of pottery and women's history.

read more
Elmbridge At War As the deadliest conflict in history, the Second World War had a huge impact on the country and Elmbridge in particular. Discover the stories of our Borough's resilient residents in this project, which was launched to mark the 75th anniversary of V.E. Day in May 2020.

read more
People of Elmbridge In 2018 Elmbridge Museum held a temporary exhibition at the Riverhouse Barn to celebrate the lives of significant people from our borough. This online exhibition features some of the stories we told. Meet the past faces of Elmbridge and see how they helped to shape the borough that we live and work in.