It was on this day, back in 1945, that Japanese Emperor Hirohito announced the surrender of Japan to the Allied forces, thus ending the Second World War. The surrender came after America had devastated Hiroshima and Nagasaki by dropping atomic bombs on the two cities on the 6th and 9th August respectively, a move which was, and has remained, immensely controversial and divisive across the world.

In Europe, celebrations once again erupted, mimicking the euphoria which had taken hold just four month prior on VE (Victory in Europe) Day. Yet VJ Day was in many ways just as momentous as the former celebration back in May, since it meant that the last British and American troops – who had continued fighting long after the demobilization of their counterparts in Europe – could finally come home.

To mark the anniversary of VJ Day, Elmbridge Borough Councillor Vicki Macleod and her brother have written a special account of the experiences of their father, Norman Edward Richardson – a Naval Air Gunner who served in the Pacific War against Japan. Find out about Norman’s remarkable Second World War career below, including one particularly courageous night involving a prominent royal character.

At the bottom of this page, you can also find Elmbridge Museum’s latest oral history video. We’ve used the oral history recordings created in the 2019/20 Memories of War Project to put together a bank of reflections on VE Day; VJ Day; and post-war Britain, 75 years on.

The Story of Norman Edward Richardson, Veteran of the Pacific War

Norman Edward Richardson, who passed away on 19th March 2020, was affectionately known by Fleet Air Arms colleagues and friends as “Dickie”.

Dickie signed up to serve in August 1941, shortly after his 18th birthday and after two earlier unsuccessful attempts to join the navy.  He was assigned to Stoker training, but early in his career he applied and was selected to train as a Naval Air Gunner.  He joined HMS St Vincent on 21st October 1941 and in March 1942 started his Air Gunner training on TAG Course 32 at HMS Kestrel, RNAS Worthy Down.

In the autumn of 1942 Dickie was sent to Quonset Point, Rhode Island, USA for training on Grumman Avengers, the Fleet Air Arm’s replacement torpedo bomber for the Swordfish. He returned to Britain on HMS Hunter in March 1943, flying on a number of anti-submarine patrols in Swordfishes from the carrier. In August 1943 he was again at Quonset point, this time with the aircrew and engineers of the newly formed 849 Squadron.  There they trained on and took delivery of the Avengers the squadron would be using in the far east. Training in America continued through to December and the squadron with their new planes returned to Britain in January 1944.

Training continued, in particular anti-submarine patrols and attack and gunnery exercises, until the squadron was sent to Perrenporth in Cornwall in April 1944 to prepare to support the allied landings in Normandy on D Day. They began active anti-submarine patrols in May and flew almost every day through May and June and much of July and August including strikes on German shipping and troop movements along the French coast.

In September 849 Squadron embarked on HMS Rajah with their planes to travel out to Ceylon (now Sri Lanka) arriving in October to join the British Pacific Fleet which was forming in Katakurrunda. There 849 squadron embarked onto HMS Victorious.  From this time, Dickie flew with the Squadron Leader, ‘Gus’ Halliday.

On January 4th 1945 Dickie was involved in the bombing raid on oil refineries at Pangkalan Brandon in Sumatra, then returned to Ceylon. The fleet was assigned to Sydney in Australia to join the Americans for the Pacific war against Japan, but en route the fleet undertook two significant bombing raids on the Japanese held oil refineries in southern Sumatra at Palambang. While the first raid on the refineries on January 24th was relatively uneventful, bad weather delayed the second attack and allowed the Japanese time to prepare.

During the second raid on Jan 29th Dickie’s plane was badly hit after dropping their bombs.  Halliday successfully flew them back towards the fleet where they were forced to ditch. All three crew got out of the aircraft, though the raft did not inflate. After 20 minutes in the water they were rescued by boats put out by the destroyer, HMS Whelp. They were welcomed on board by the Whelp’s executive officer Prince Philip of Greece, better known today as the Duke of Edinburgh.
Dickie’s crew and two surviving crew from another badly damaged 849 Avenger travelled with HMS Whelp to Fremantle to land a sick crew member.  On its arrival, they transferred back to HMS Victorious.

Listen to ‘A Right Royal Rescue’ a BBC Radio Four interview broadcast in 2006, in which the Duke of Edinburgh recalls his role in the rescue. 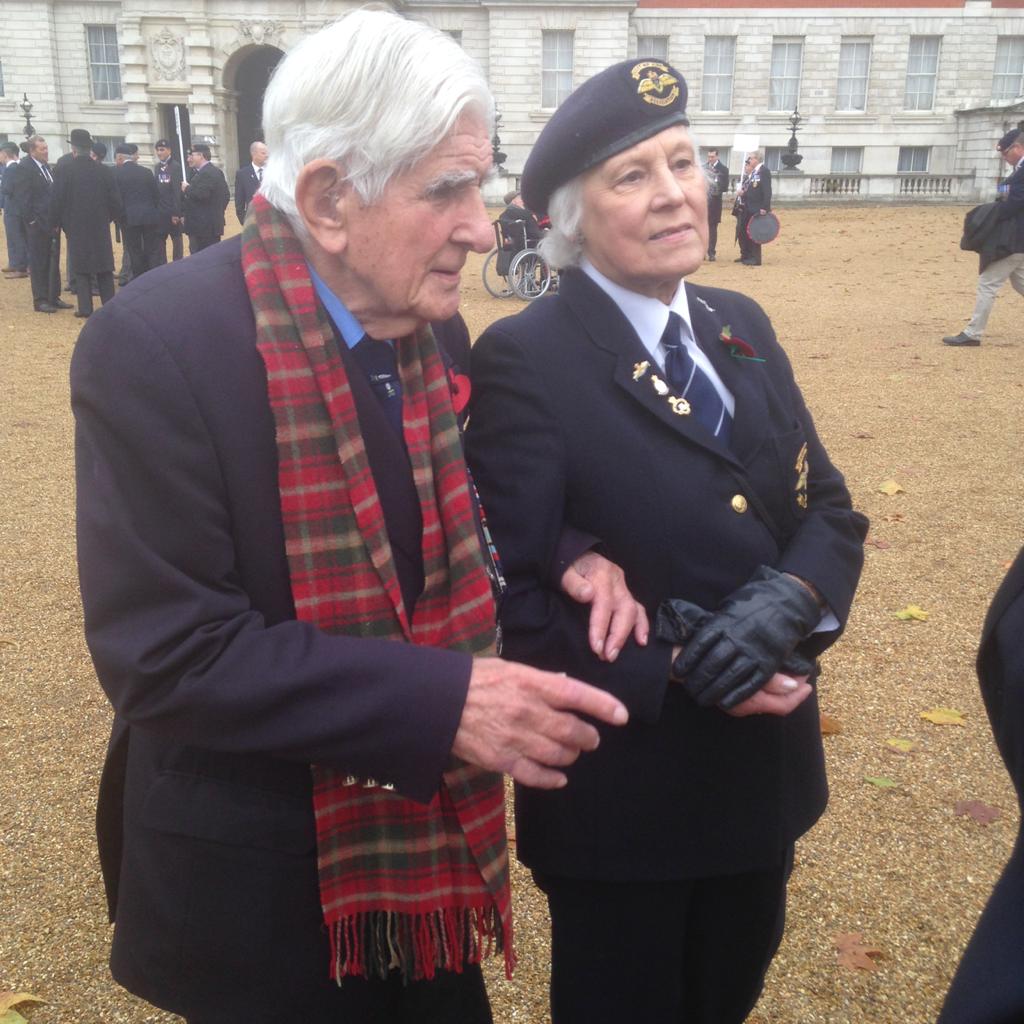 Dickie on Remembrance Sunday 2015 with Wendy van der Veen, one of the two WRENS who unveiled with Prince Charles the Fleet Air Arm memorial statue Daedalus, on the Embankment outside the Ministry of Defence.

After refitting, repairs and further training the British Pacific fleet set sail to support the Americans attacking Japanese held islands from which they were defending the Japanese mainland. In March, April and May 1945 849 Squadron was involved in 10 bombing raids over the Sakishima Gunto islands and Formosa as well as carrying out fleet protection sorties.
In early June 1945 the fleet returned to Sydney. And most, if not all of the rest of the crew were rested.  Dickie, meanwhile, was retained for more action.  His Commanding Officer David Foster’s report, on 6th June 1945, read:

“A reliable TAG.  He has shown himself resourceful and courageous.  If he exercises more ‘tact’ should make a good P.O. (Air) i/c of a Squadron.”

From this time Dickie may possibly have been the only original 849 squadron air crew on HMS Victorious. This time he flew as senior TAG and acting CPO as the fleet once again returned to action off Japan. Flying this time with the squadron CO, he flew a further 7 strikes – on harbours, airfields and shipping on the Japanese mainland, two of those raids being on August 10th, the last day of action by the fleet.

The second raid on August 10th was his last recorded flight. Dickie had completed a total of 511 hours of flying in total, and had unbroken service with 849 Squadron from its formation in August 1943 to its dissolution at the end of the war. The final remarks of his squadron CO Johnny Grifficths in his flying log are:

“A thoroughly reliable and efficient TAG, a great asset in the air. Has carried out his duties of senior air gunner conspicuously.”

Dickie not only carried out his war time duties conspicuously, he also played a leading role in bringing back together from all over the world, members of 849 Squadron, who met annually in November from the 1980s to 2015.

Elmbridge Museum have put together clips from the 2019/20 Memories of War Oral History Project.

All of the people recorded were past or present residents of the Borough of Elmbridge, or had family links to the local area.

In this video, hear interviewees speaking about:

To find out more about Elmbridge during the war

Explore the 'Elmbridge at War: The Blitz in our Borough' exhibition where you'll find Hidden Treasures object films, first-hand memories, Curator's talk and more... Elmbridge At War online exhibition
We use cookies on our website to provide you with a better experience. See our privacy policy for further information. OK