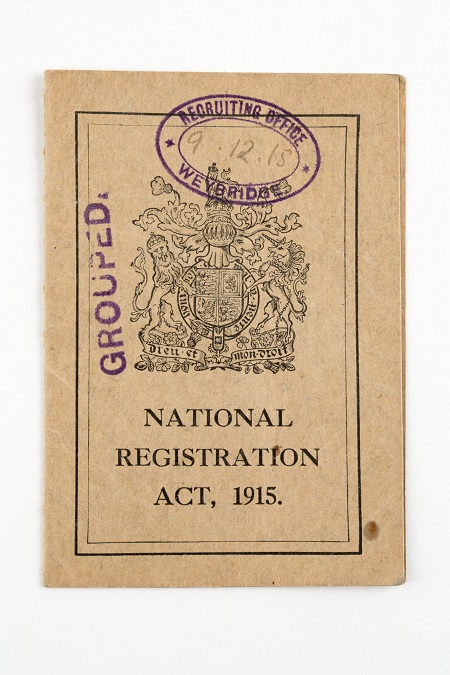 National Registration Act identity card for AV Newman issued on 09/12/1915, when he was working as an electrical engineer and living in Weybridge

In the most famous poster of the First World War, and indeed, perhaps of any war, the moustachioed army commander Field Marshal Lord Kitchener, clad in army regalia, points a resolute finger while seemingly casting his stern gaze directly into the eyes of the viewer.

This ingenious propaganda piece relays a simple but highly persuasive message: “Your country needs YOU”. The success of its technique – which taps into social pressure to influence the target audience – is borne out by its use, time and time again, by countries the world over.

This wasn’t the only guilt-inducing image the War Propaganda Bureau had up its sleeve in the years before conscription. 1914-16 in particular saw young men across the country bombarded with an overwhelming array of colourful and conspicuous propaganda. Bold headings declaring that “Women of Britain say – GO!” and reporting “An Enquiry from the Front: When are the other boys coming?” attempted to recruit young men into the army by invoking a sense of duty to their friends, family, and country.

The intent behind this piece from Elmbridge Museum’s collection is very similar. Although worlds away from the striking images of the traditional propaganda posters, the ‘National Registration Act Card’ did in fact form part of a larger approach adopted by a government desperate for soldiers. By the second half of 1915, manpower was urgently needed – casualties up to this point had been greater than ever expected, while voluntary enlistment was rapidly losing steam. In August 1915, the government therefore initiated ‘Registration Day’ for a National Register. As a census-type survey, it sought to collect a record of the gender, age and occupation of every person between 15 and 65 years old. The card above was issued in December 1915 to a Mr A.V Newman, an electrical engineer who lived in Dorchester Road, Weybridge.

While seemingly benign, an underlying motive of the entire campaign was social pressure. By creating a bank of information on men fit to fight, the British government hoped to use this to personally canvass individuals, ramping up propaganda efforts in areas which still had high numbers of civilian men. The Surrey Mirror reported on 20th August that “one of the first things to be taken in hand will be a direct personal appeal to all men of military age who are not engaged in really necessary national work, to come forward and supply the nation’s need”. The British government also hoped the prospect of being forced to openly declare that “they are doing nothing to help their country in her hour of crisis” might pressure more men into signing up, just as many propaganda posters had attempted to do in the months prior. The National Registration Act did, of course, also have an eye towards preparing for the conscription which would be introduced just a few month later in January 1916, by revealing exactly how many extra men could be enrolled into the armed forces.