Many domestic items in Elmbridge Museum’s collection are linked to the British Empire through their materials, design, usage, or imagery. Local and imperial spheres were in fact heavily connected by trade networks, with a variety of goods imported from the colonies of the British Empire for use in domestic life.

The economic potential presented to Britain by the exploitation of its empire was celebrated and explored in grand exhibitions such as the British Empire Exhibition of 1924, and British companies made a fortune from the exploitation of colonial resources. One of the most prominent of these was the British East India Company. The company was set up to trade in Indian commodities such as tea, cotton, silk and spices. At its height, the Company accounted for around half of the world’s trade and effectively controlled much of India, paving the way for British rule there.

As a result, the largest amount of physical evidence of Empire in Elmbridge was in the home. Ranging from dinner sets, to accessories, souvenirs and decorative items, all were historically categorised in our collection as such, but when viewed from a different perspective, these objects reveal strong links to the British Empire. 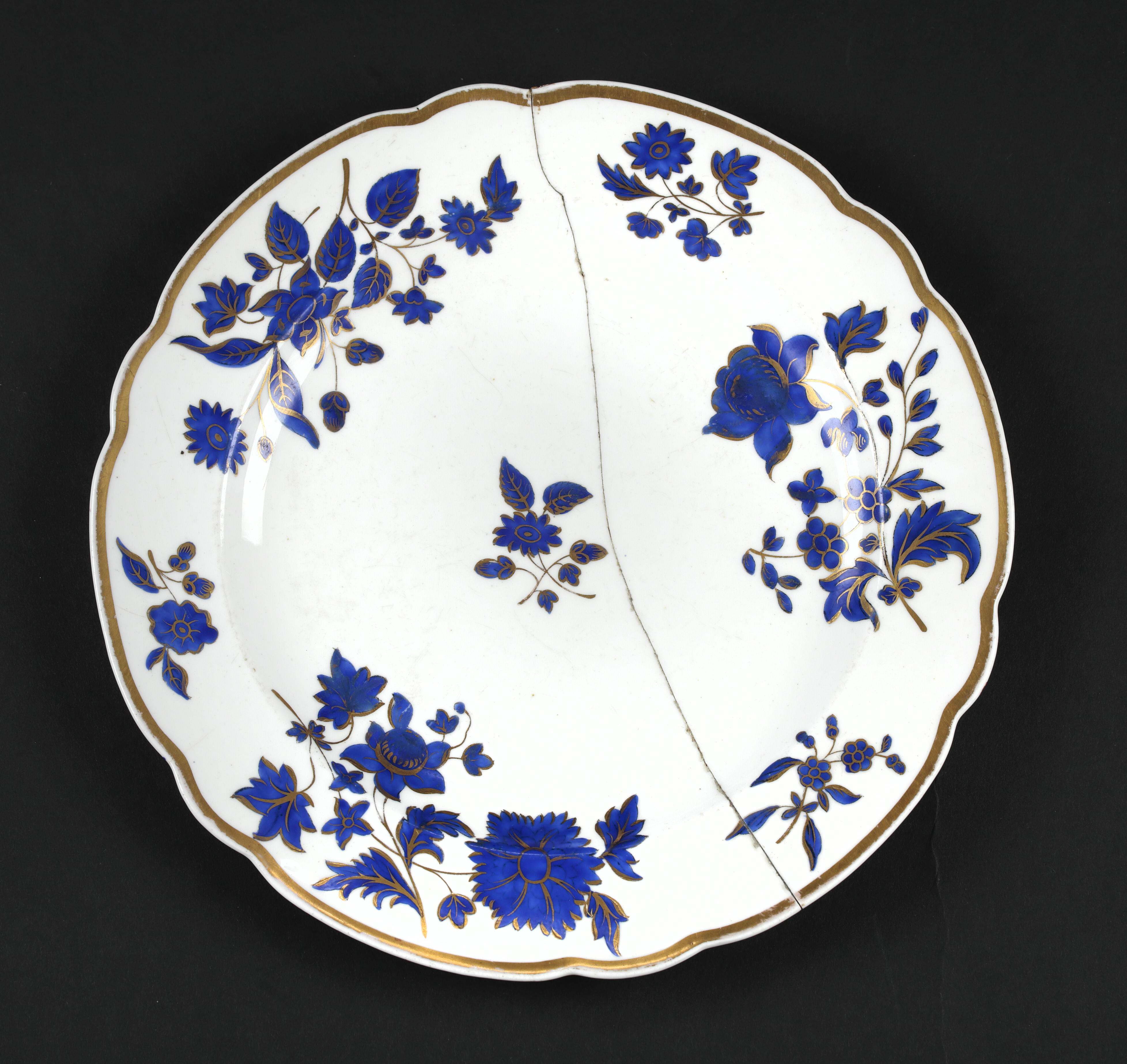 inner plate, part of a service used at Claremont during the time of the Duchess of Albany's residence there ( 1890's ). Circular with fluted edges, gold-painted outer rim, design of royal blue and gold flowers and leaves. On reverse side a circle of small flowers as a trade mark with " Spode Felspar Porcelain " written above and inside it.

This porcelain dinner plate was part of a service used at Claremont during the Duchess of Albany’s residence there in the 1890s. On the reverse side is a circle of small flowers as a trade mark with ” Spode Felspar Porcelain ” written above and inside it. Spode porcelain, like much of Wedgwood’s Queensware, often used scenery, designs, and colours inspired by oriental and middle eastern influences, where this style has been popular since the 14th Century.

“The nineteenth century would see unprecedented territorial expansion across Asia, Africa and the Pacific. This was matched by an ‘informal empire’ in China and Spanish America, in which countries not formally under British control would be pulled into the ambit of British trade, sometimes forcibly, as was the case with China and the Opium Wars of 1839-42 and 1856-60.” Kirsten Mckenzie, Britain: Ruling the Waves (Age of Empires).

Kirsten Mckenzie is Professor of History at the University of Sydney. She specialises in imperial history and the links between Britain and Australia, with publications including Imperial Underworld: An Escaped Convict and the Transformation of the British Colonial Order. 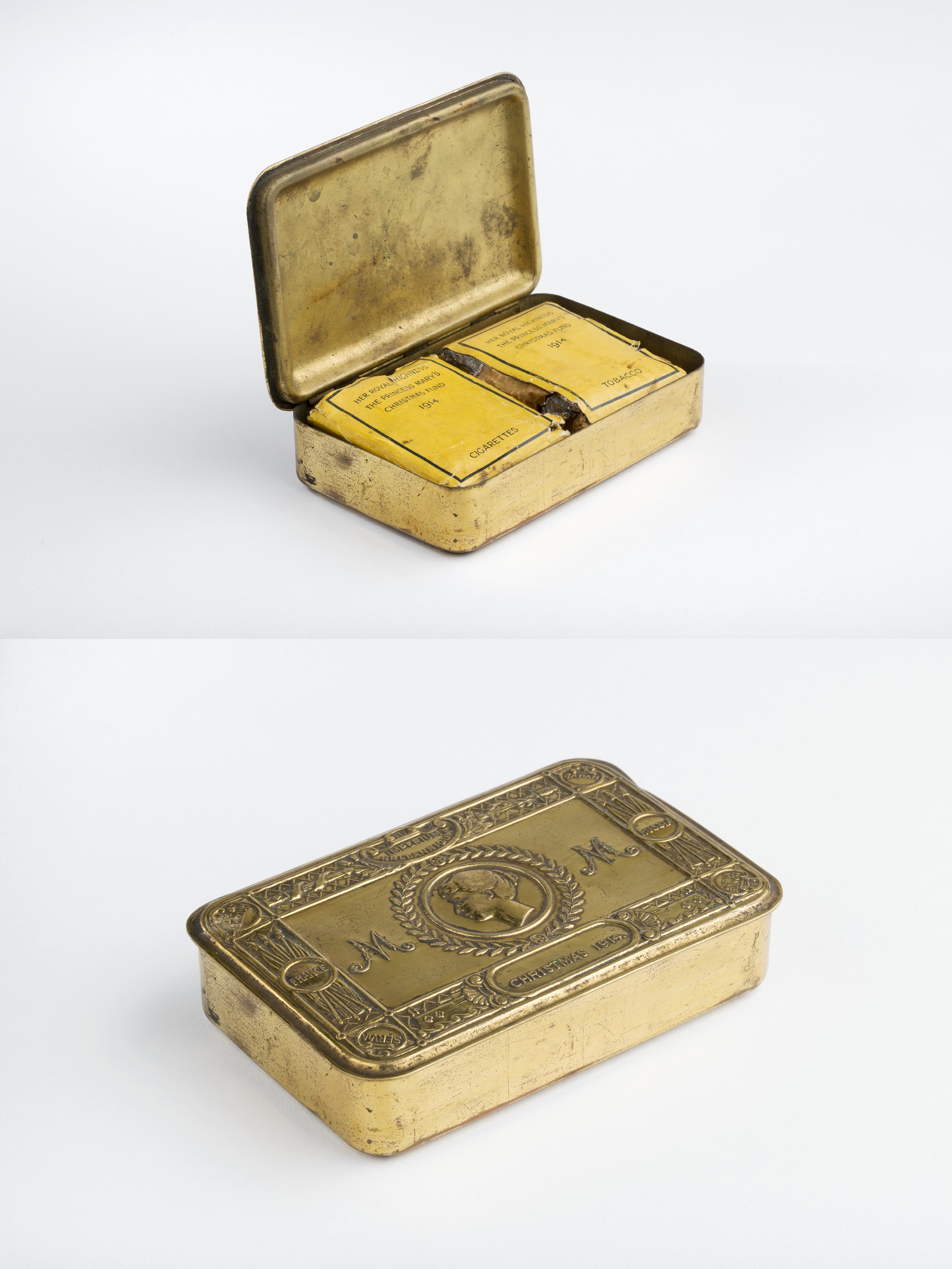 Brass-plated tin 'Princess Mary's Christmas Fund Tobacco tin containing the two original packets, one containing tobacco and one cigarettes. Top of tin central profile portrait of Princess Mary within a laurel wreath and 'M' embossed each side of circle.

This brass-plated tin for ‘Princess Mary’s Christmas Fund’ in 1914 contains the two original packets, one containing tobacco and one cigarettes. On top of the tin is a central profile portrait of Princess Mary within a laurel wreath and ‘M’ embossed on each side of the circle. The border pattern contains the names, Belgium, Japan, Russia, Montenegro, Servia and France and beneath the portrait “Christmas 1914”. Above the portrait, ‘Imperium Britannicum’ is inscribed.

The Princess Mary Christmas Fund was distributed to all members of the armed forces of the British Empire on Christmas day 1914, during the First World War, with this one being saved and treasured long after the event. Its contents, as well as its pattern and usage by troops across the globe, demonstrate historic British imperial gain.

“The government and the education system failed to explain to white Britain that, as the academic Adam Elliot-Cooper puts it, we had not come to Britain, but ‘rather that Britain had come to us’. They did not explain that the wealth of Britain… was derived in no small part from the coffee and tobacco, cotton and diamonds, gold and sweat and blood and death of the colonies.” Akala, Natives: Race and Class in the Ruins of Empire.

Akala is a rapper, poet, journalist, writer and activist. He was voted Best Hip-Hop Act at the 2006 MOBO Awards and was included in the 2020 Powerlist of the most influential Black British people in the UK after the success of his 2018 book, Natives. 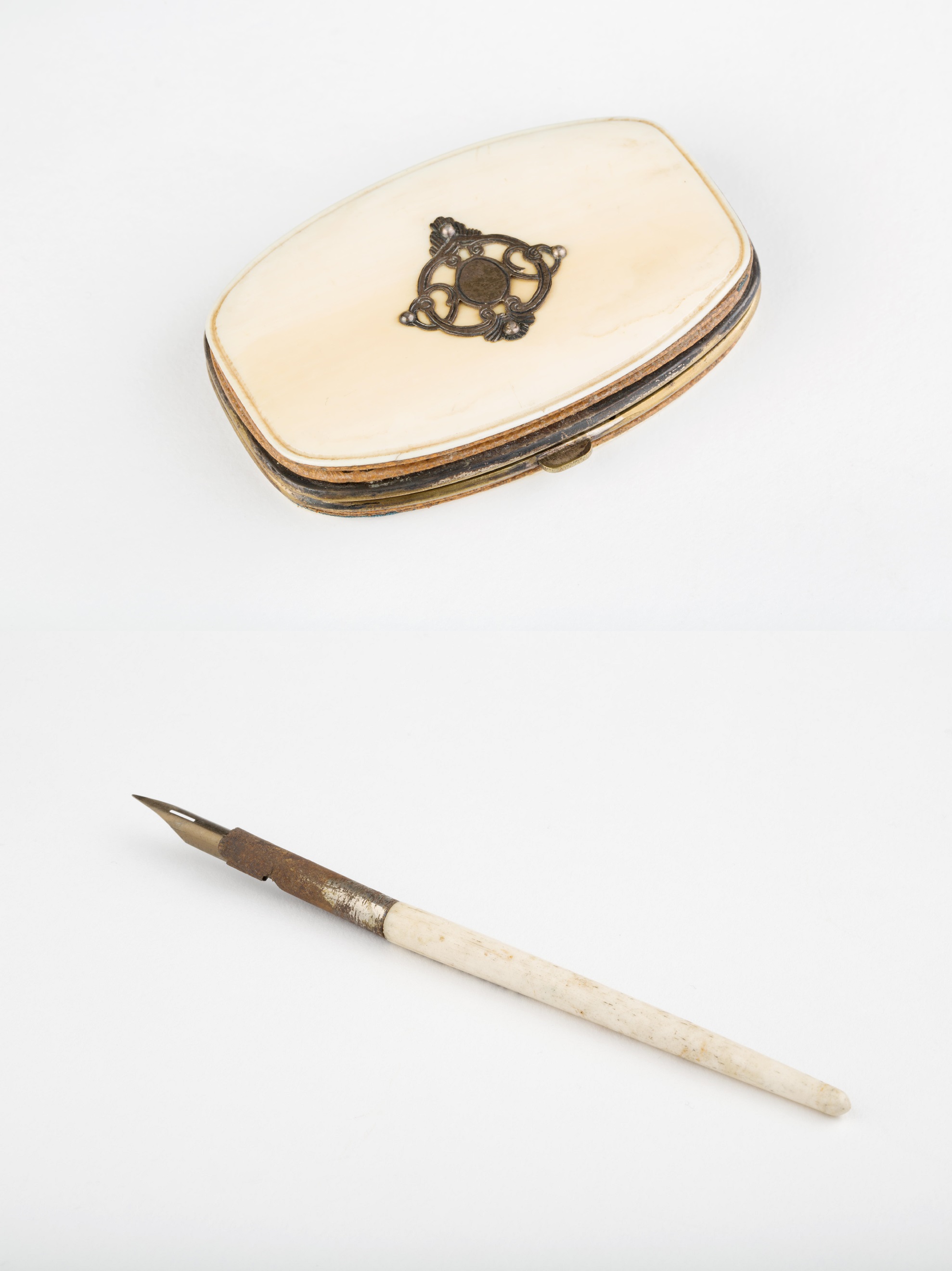 Top: Late Victorian lozenge-shaped small ivory purse. Inside is royal blue moire silk and a central purse section with a silver top and separate hinge. The purse has a silver design with four silver pins mounted on the front, to take initials. Bottom: a plain ivory pen holder.

This late Victorian small ivory purse has a back and front of ivory with a silver frame and hinges, and a leather gusset between the ivory and the frame. East African ivory was hugely sought-after in the Victorian era, with trade in the material becoming extremely lucrative. The resultant ‘Scramble for Africa’ saw numerous European powers attempt to establish control and expand their empires into Africa by suppressing its populations and exploiting its valuable resources, including ivory, gold and diamonds. As a result, ivory entered upper-middle class homes across Britain in the form of fashionable items, with the pen holder underneath the purse also made from this material.

“Nineteenth-century furniture makers liked tropical hardwoods such as teak and mahogany, and decorators cluttered houses with rugs from Persia and Turkey, and knickknacks made from African ivory or mother-of-pearl from the South Pacific… Women bejewelled themselves with gold and diamonds from South Africa and sapphires from Ceylon.” Robert Aldrich, Introduction: Imperial Overview (The Age of Empires).

Robert Aldrich is Professor of European History at the University of Sydney, specialising in modern Europe and colonial history, as well as the history of gender and sexuality. He has published a number of books, including The Last Colonies and Colonialism and Homosexuality.

This green, square Kenya coffee tin commemorates the British Empire Exhibition of 1924. This huge pageant was set up at Wembley, and exhibited products and people from colonies across the Empire in an effort to celebrate Britain’s colonial power and show off the country’s gains through trade with them. It included countries such as Palestine, Burma, South Africa and, of course, Kenya.

“Empires and colonialism themselves are part of the global history of power, inequality, and exploitation, the history of amassing resources for major innovations and developments that have shaped the world, its societies, and individuals and their notions of both society and identity, profoundly. The emergence of the modern world and of globalisation as a world system are marked by colonialism.” Hartwig Fischer, Collections Entail Responsibilities: Notes on a Global Institution.

Hartwig Fischer is an art historian and Director of the British Museum. He was formerly Director of the Dresden State Art Collections and his publications include the 2006 book Kandinsky: The Path to Abstraction. 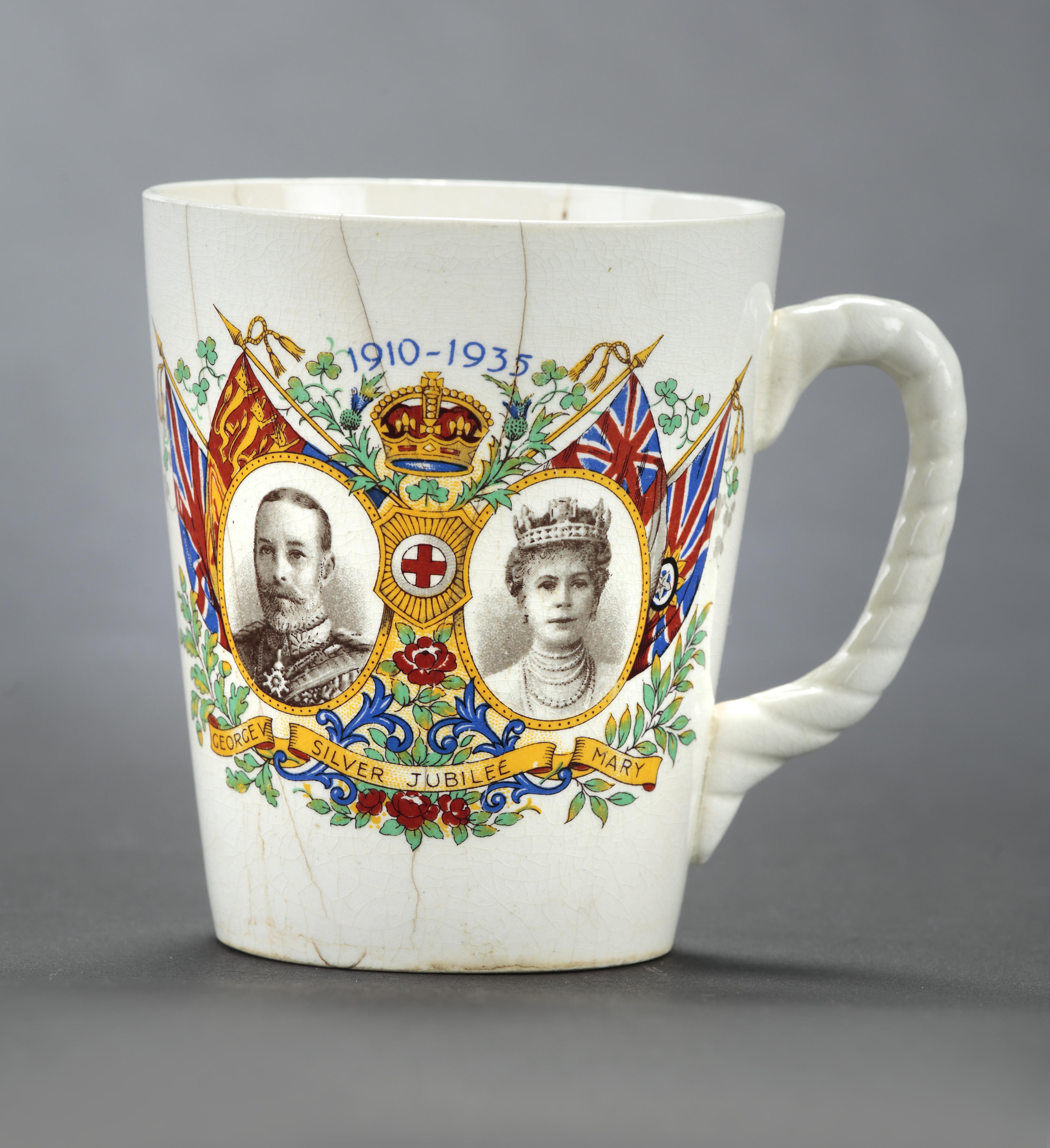 Semi-conical white ceramic mug with rope twist handle. Decorated on the front with oval sepia portraits of George V and Queen Mary in a polychrome surround of 4 flags, crown, national emblems and blue scrolls. Above in blue: "1910-1935", below on scroll: " George V. Silver Jubilee. Mary".

This semi-conical white ceramic mug with a rope twist handle is decorated on the front with oval sepia portraits of George V and Queen Mary, and celebrates the king’s Silver Jubilee in 1935. The two portraits are surrounded by four flags, a crown, national emblems and blue scrolls. On the back, within a gold ring and laurel wreath; is inscribed “King of Great Britain and Ireland and All British Dominions”, and on a scroll “Emperor of India”, clearly marking out the royal role within and associations with the colonies of the British Empire as had been common since the reign of Queen Victoria. In his Silver Jubilee speech, George V made many references to the British Empire, Queen Victoria, and India in particular.

“Empire was the vehicle for nationalism, royalty the focus… Royalty was a sufficient underlying factor in a country which had all the evidence of its success before it. When the success began to run dry at the end of the century, however, it had to be bolstered with other visions of Englishness in order to remind the population who they were.” Paul Greenhalgh, Ephemeral Vistas: The Expositions Universelles, Great Exhibitions and World’s Fairs, 1851-1939.

Paul Greenhalgh is a historian of art and design. He was formerly head of research at the V&A Museum and is currently Director of the Sainsbury Centre for Visual Arts at the University of East Anglia. He has also published a number of books, including Ceramic, Art and Civilization.

In order of appearance

Explore the bibliography for this section for some great further reading, or take a look at our exhibition booklist for some other excellent titles which can be found in your local Surrey Library branch.

Let us know your thoughts about Empire in homes across Elmbridge.

Go to login / register
Previous Page - Objects of Empire Next Page - Empire in the Landscape
We use cookies on our website to provide you with a better experience. See our privacy policy for further information. OK