How did the humble advert turn into a pillar of popular culture?

From cereal packets with cartoon characters, to coronation-themed confectionary tins, this display was at Cobham Library from September 2019 – February 2020, and marvelled at the marketing of by-gone eras.

This short online exhibition highlights the ways in which marketing underwent a revolution that completely changed the designs and advertisements for food and beverages. Kellog’s Coco Krispies packet from 1972, with a picture of Sweep the poodle on the front. On the back is information about free “Crazy Canines” given away in each packet.

You are more likely to recognise this popular Kellogg’s cereal. The brand was introduced in the 1950s and initially known in the UK as ‘Coco Pops’. In the late 1960s, it underwent a name change in the UK to bring it in line with the so-called ‘Coco Krispies’ marketed in America. This box was produced in 1972 and reflects the ‘Coco Krispies’ American re-brand. However, the name change was not a success here and, by the mid 1970s, Kellogg’s reverted to calling the cereal ‘Coco Pops’.

This box was bought for just 10½p in Tesco in 1972. At such a low price, the cereal may seem like a bargain – yet inflation has meant the cereal is now sold for around twenty times this!

The front of the box features a picture of Sweep, a little dog glove puppet who is a character from the children’s TV series The Sooty Show. Sweep is shown enjoying a bowl of the chocolate-flavoured popped rice cereal. The panels on the side depict Sweep’s routine to stay healthy and explain why Coco Krispies are his favourite breakfast. The back of the box advertises free gifts which were available in every box of Coco Krispies.

The panels on the box side depict Sweep’s routine to stay healthy and explain why Coco Krispies are his favourite breakfast. Kellogg’s used the back of the box to advertise the free gifts which were available, and the initiative of a ‘Free Crazy Canine’ encouraged shoppers with children to buy the cereal.

The Nabisco ‘Shredded Wheat’ cereal box also uses clever marketing, this time featuring well known comic book characters ‘Tom and Jerry’. A side panel of the box says that there are three comics to collect in Shredded Wheat boxes. These comics were given away in cereal packets during the 1970s, but sales incentives like this were common right up until the early 2000s. 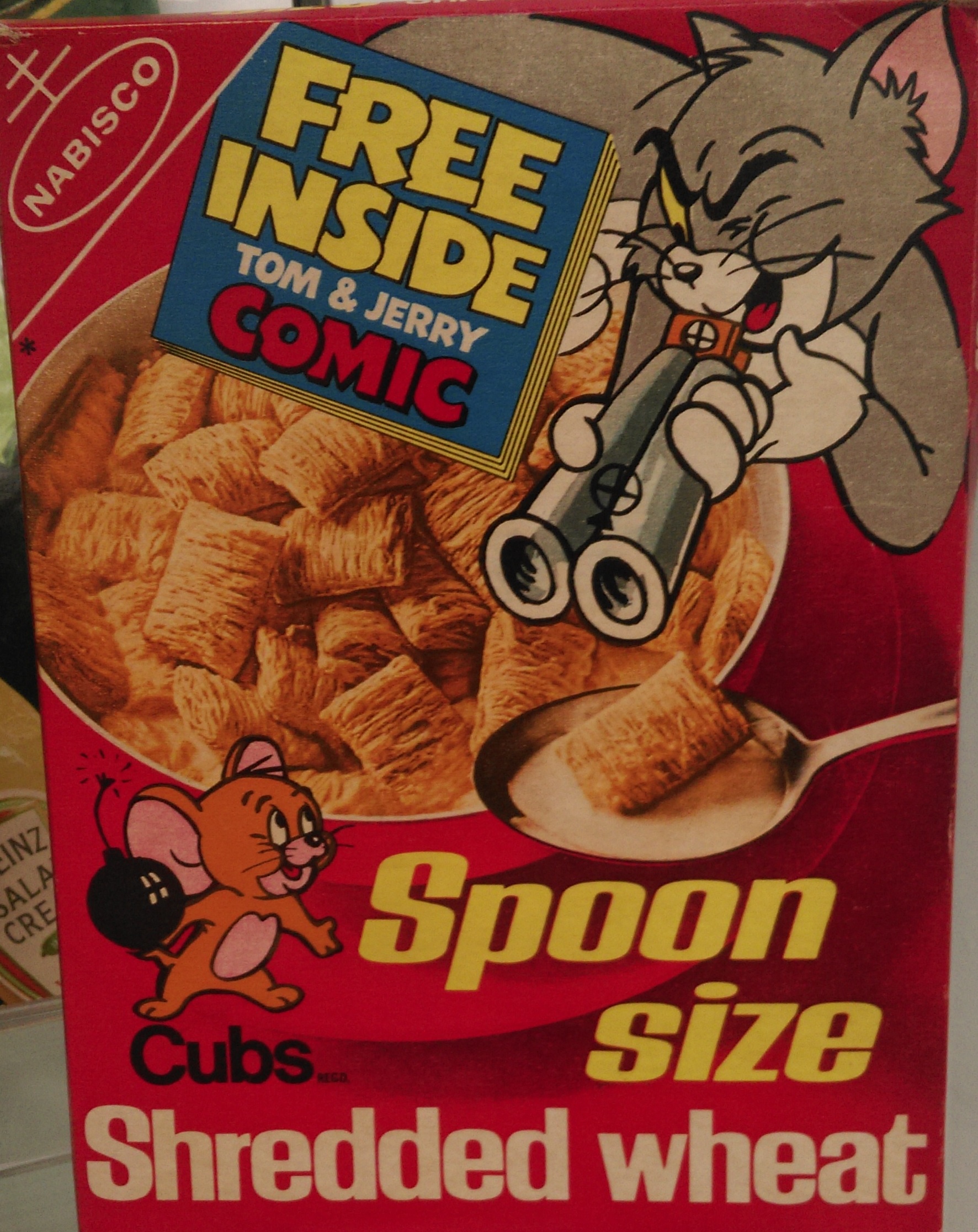 This cloth doll is wearing a red jacket and white trousers, white shirt with high collar and bow tie, and black shoes with yellow spats. The doll bears the name ‘Sunny Jim’ around his hat, and he looks as if he is striding out and sports a toothy grin.

Sunny Jim is carrying a cereal packet labelled ‘FORCE’. This is because the character was a promotional figure for ‘Force Wheat Flakes’, and the doll was produced as an advertisement, a popular strategy amongst brands of the time to make them more memorable. 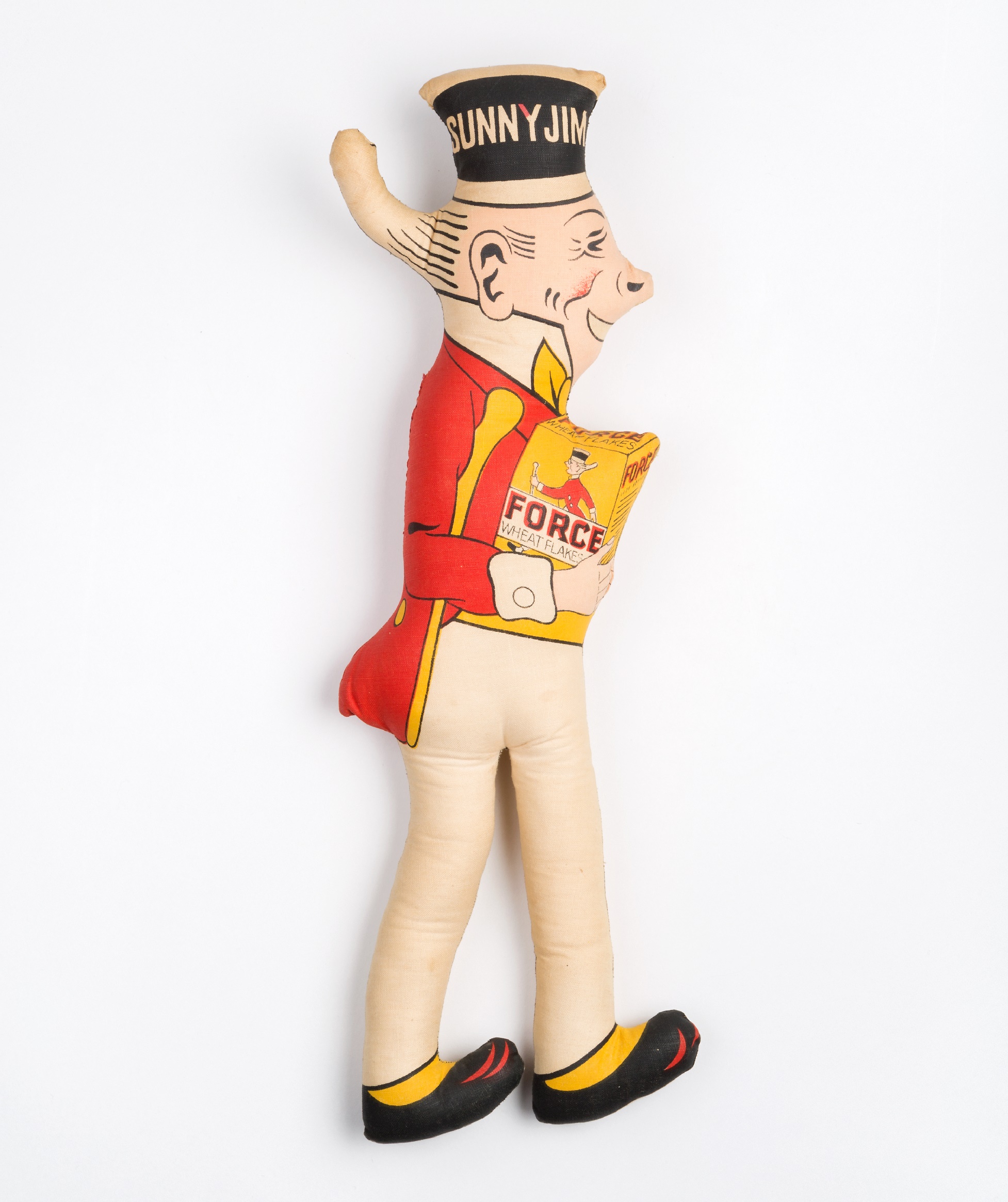 The Story of Colman's Mustard Colman’s has been based in Norfolk since the company was founded in 1814. The company was once of the first to build schools and medical facilities into their factory setup.

Colman’s English Mustard packaging has changed very little for decades. The bull’s head logo was invented in 1855, and the iconic yellow packaging with red text dates from 1866.

Rowntree sweet tin for the coronation fete of King George V at Crystal Palace in 1911.

Henry Rowntree founded Rowntree’s in 1862 as a confectionary company, but the company did not develop their famous Fruit Pastilles until 1881. This flat tin shows how the company marketed special packaging to commemorate King George V’s Coronation Fete at the Crystal Palace in 1911. The tin contained chocolate, and the lid has inset portraits of King George V and Queen Mary with the Royal Standard, sceptre and orb. The King’s Coronation Fete, Crystal Palace 1911.

Cadbury had been producing cocoa and drinking chocolate since 1824 in Birmingham, and by the 1860s, Cadbury was selling expensive boxes of luxury chocolates.

The Cadbury brand was revolutionised by the launch of Dairy Milk in 1905 and Bourneville in 1908. New marketing campaigns that helped to sell Cadbury’s products were also started in the early 20th Century. The tin below is from 1953, and shows how the brand used Queen Elizabeth II’s coronation to sell a collectible product that had more value to the consumer, which the company could make more money from.

Pictured to the right of the Cadbury’s tin below is an Oxo tin from 1953. This demonstrates how the brand, just like Cadbury’s, also used Queen Elizabeth II’s coronation to sell a collectible tin that had more value to the consumer. From Troops To Tabletop

The topic of liquid meat is not the most appetising when it comes to food, but specially marketed meat products have gained popularity with consumers over the last two centuries.

Bovril was first introduced to the market in 1886. This ‘fluid beef’ drink had been used to feed Napoleon’s army in 1871, and it quickly became popular in Britain as a drink that could provide strength. The bottle displayed on the right here shows the old style of packaging; the modern bottles are similar in shape to Marmite jars.

Oxo was created in 1840 when a German chemist invented meat extract. It was originally sold in bottles, like the one on the left in the picture opposite. It was not until 1910 that the packaging was changed and Oxo was marketed in cubes to make it more accessible to the masses.

Oxo and Bovril in the Collection

Bovril Bottle Small brown glass Bovril jar which dates to the late 19th Century. It was found in the grounds of the Oatlands Park Hotel in 1972.

Milbourn's Shop. Photograph of Milbourn's grocery and present shop. In the windows are adverts for "Bovril, Bisto, Oxo and Lyons Tea".

Oxo Bottle Small brown glass Oxo bottle, dating to the early 20th Century. It is one from a set of 13, all dating back to the Edwardian era.

Oxo Cubes Box This box, dating to the second world war, contained six Oxo cubes. The white container inside slides out from the red cover like a match box. The red cover lists some uses for Oxo on the bottom. 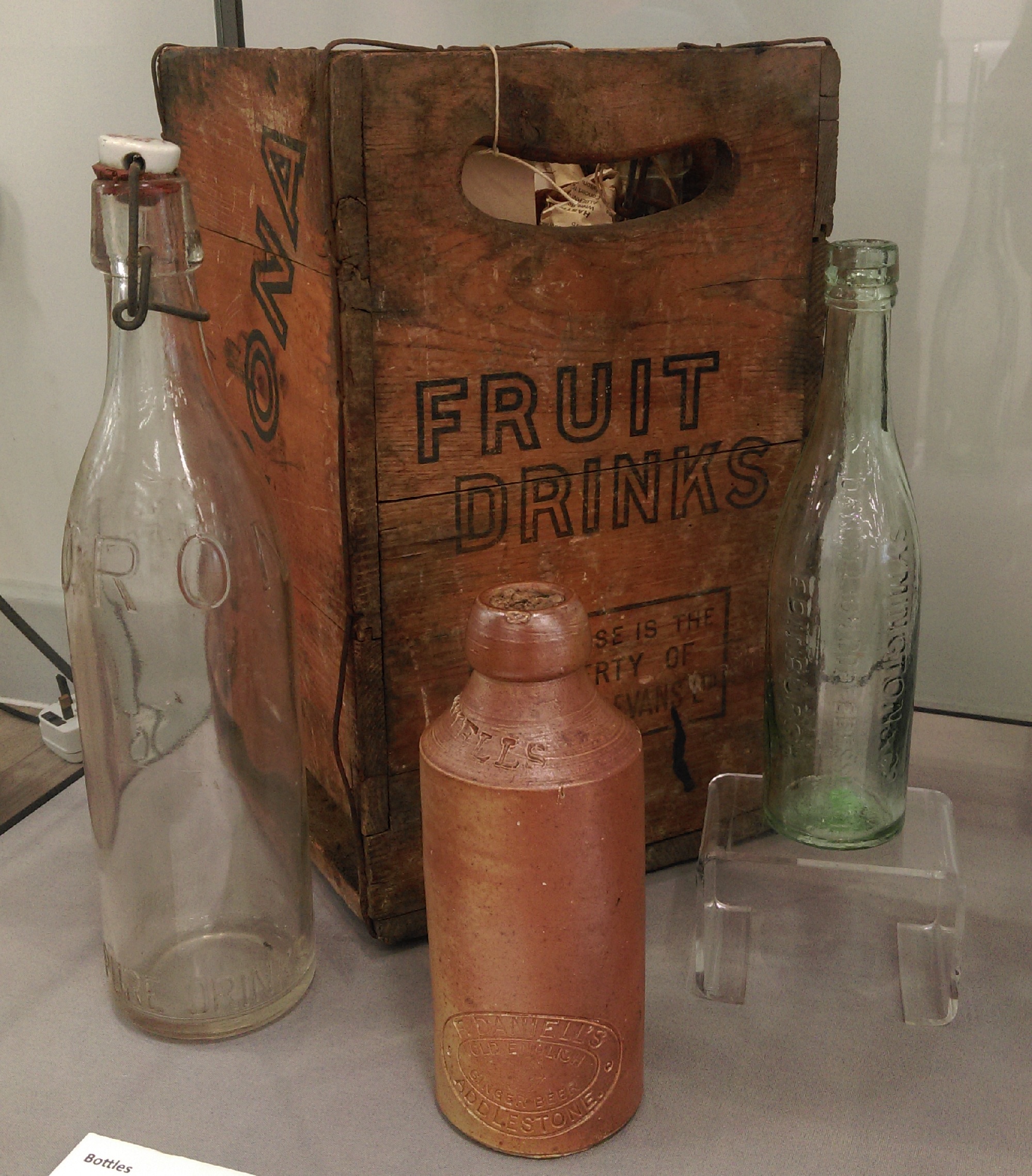 Box for 4 Corona bottles, with ‘Corona’ and “Fruit Drinks” written on the sides.

The drinks bottles here show how branding and advertising on bottles has developed. Bottles were made of stoneware and then glass in the first part of the twentieth century with the maker’s names imprinted, so that bottles could be reused. The bottle designs were simple and marketing was kept minimal.

This wooden crate holds four Corona bottles. Corona was a brand of soft, carbonated drink available from Thomas & Evans from the 1920s in flavours such as orangeade, dandelion and burdock, raspberryade and lemonade.

The wire-hinged, china and rubber stopper at the top of the bottle was designed to hold the cap on and keep the drink fizzy. Each bottle has ‘This bottle must only be used for Corona’ printed on it.

The green tin of Lyons coffee is vacuum packed to keep the coffee fresh, and has never been opened! The lid is impressed with the words ‘Lyons Coffee’ and ‘Vacuum packed’.

The product is marketed with the fact it is ‘Fresh as the Dawn’. John Sainsbury started his business in a small grocer’s shop in Drury Lane, London, in about 1869. From here, the business grew and expanded throughout the country.

In the late nineteenth century, packaging was simple and used the materials available. The ceramic potted meat jar displayed here is printed with an elaborate ‘S’ and banners reading ‘J Sainsbury’s’ and ‘Potted Meats’. The words ‘Superior’ and ‘Homemade’ make the product appeal to those cooking at home.

In the 1960s, Sainsbury’s expanded its own-brand range, and by the later part of the 20th Century simply designed disposable packaging as we would recognise today had become the norm.

Now you've discovered the products, why not take a look at the local shops which sold them by visiting our Historic High Streets online exhibition. It includes the long history of our local Sainsbury's stores and much, much more!

Want to find our more about some of the famous companies we've covered? These useful websites take a look at some of them in detail.

A Day At The Races The historic sport of horseracing not only holds a unique place in British culture, but in Elmbridge's landscape in particular. Discover the ups and downs in the stories of Sandown and Hurst Park over the ages here.

read more
Young Victorians: Childhood in Elmbridge 1837-1901 Childhood in Elmbridge has changed radically since Queen Victoria's reign ended in 1901. However, the themes of home life, education, and play have remained timeless. Here, we assess the changes and continuities within the lives of local children over more than 100 years.

read more
Pulling Teeth: Walton's Dental History We're diving into Walton-on-Thames' dental past, examining dental tools made at Walton's famous factory and tracking the changes to a practice which terrifies many.