The dental factory at Walton, positioned on Churchfield Road, was built in 1896 and was established by Edward Power, a Chemist's son. 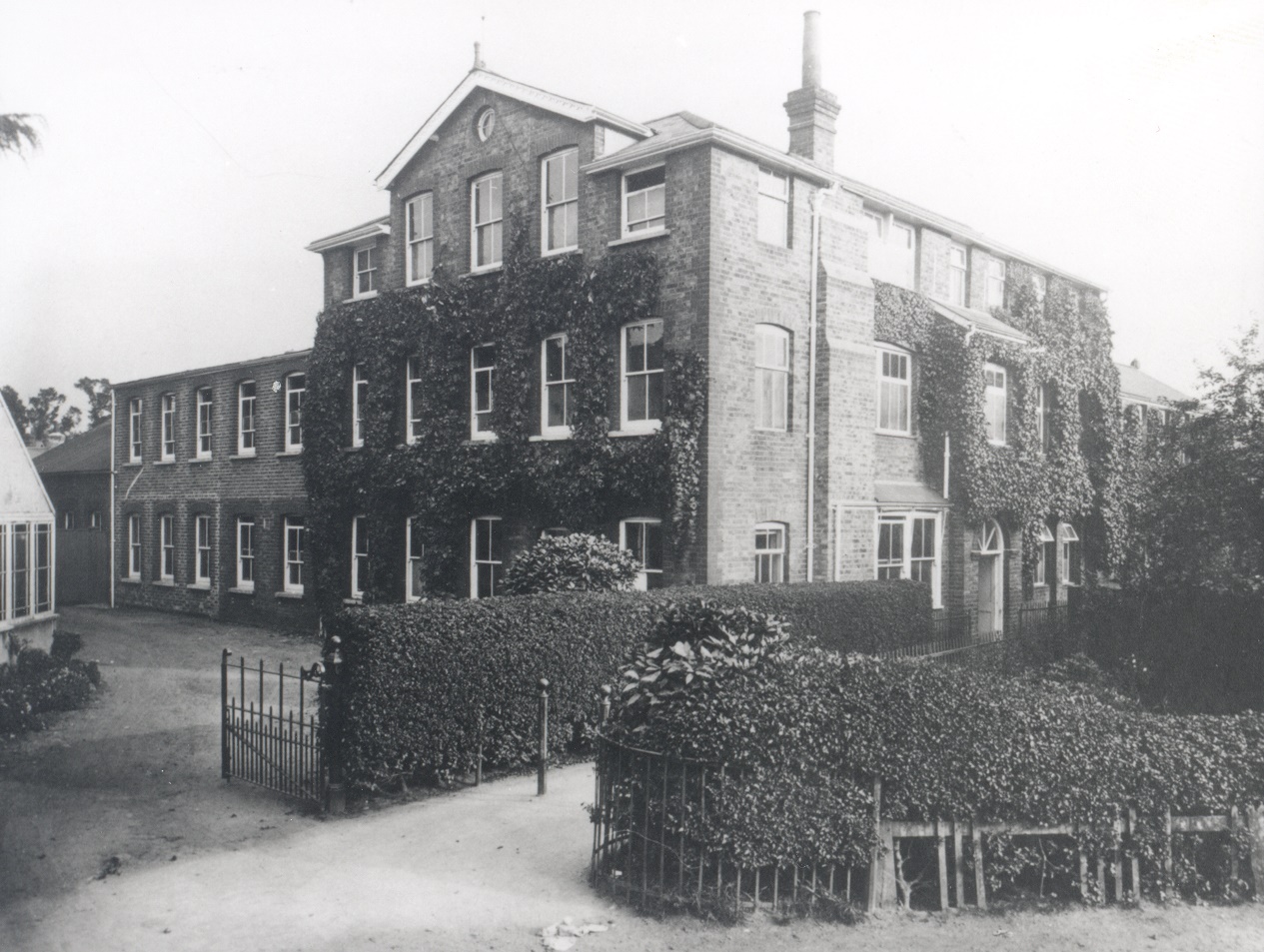 Initially producing tools independently, the factory was soon taken over by Claudius Ash, Sons & Company. The Ash Company was a sprawling enterprise with factories and outlets all over Europe.

A double page spread from a 1921 memoir of the Ash Company not only illustrates the “advanced class of work” the Walton factory produced, but also the level of elegance and detail that the dental industry demanded of its products, something which will also be demonstrated through the objects included in this online exhibition.

The Walton site went through its last company transition in 1924 when it became a factory of the Amalgamated Dental Company – one of the world’s leading dental production companies.

Mr. Stan Patto managed the company for a time and was based locally. Elmbridge Museum’s collection of dental tools dates from Patto’s directorship.

As examples of a specific trade, the items on display are fine illustrations of the day-to-day tools of dentists. However, when viewed more broadly, Patto’s rich collection helps clarify and explain industrial processes in the mid-twentieth century.

Unfinished brass handle Unfinished tools, such as the brass handle shown here, demonstrate the production-line type processes that these tools went through. This handle has not yet been turned, which would allow attachments to be changed for differing needs.

Stainless steel dental probe with wax Other tools in Patto's collection show us how tools would have been transported while keeping them bacteria-free. Unbroken wax protection still clings to stainless steel probes. Wax is air tight, meaning tools can be transported from factory to practice while remaining sterile.

Root extractor with jaws at a right-angle The high level of craftsmanship, noted in the Ash Company's 1921 memoir, continued from opening to closure - attention to detail and finishes was evidently important within the Walton factory. The imprinted detail on the handle of this tool shows a high level of craftsmanship. Experimental finishes and prototype tools - such as the one below - moved beyond design stages and were produced at Walton.

Working-end of a dentist's drill This would have held a drill bit attachment. There is an impressed stamp on the upper socket, with the trade mark of a micrometer with a ribbon across it inscribed "PRECISION" and below this the words "ASH ENGLAND". The shaft has hatched texturing to provide grip.

Dental mirror in stainless steel There is a hatched engraving on one section of the handle to give good grip. The back of the mirror is impressed: "ASH EMPIRE 6 MADE IN ENGLAND". This is from a collection of unused dental instruments from the Amalgamated Dental Company, Walton (closed 1981). The donor worked at the company from 1954-66, and his father-in-law was Stan Patto, the company Director. 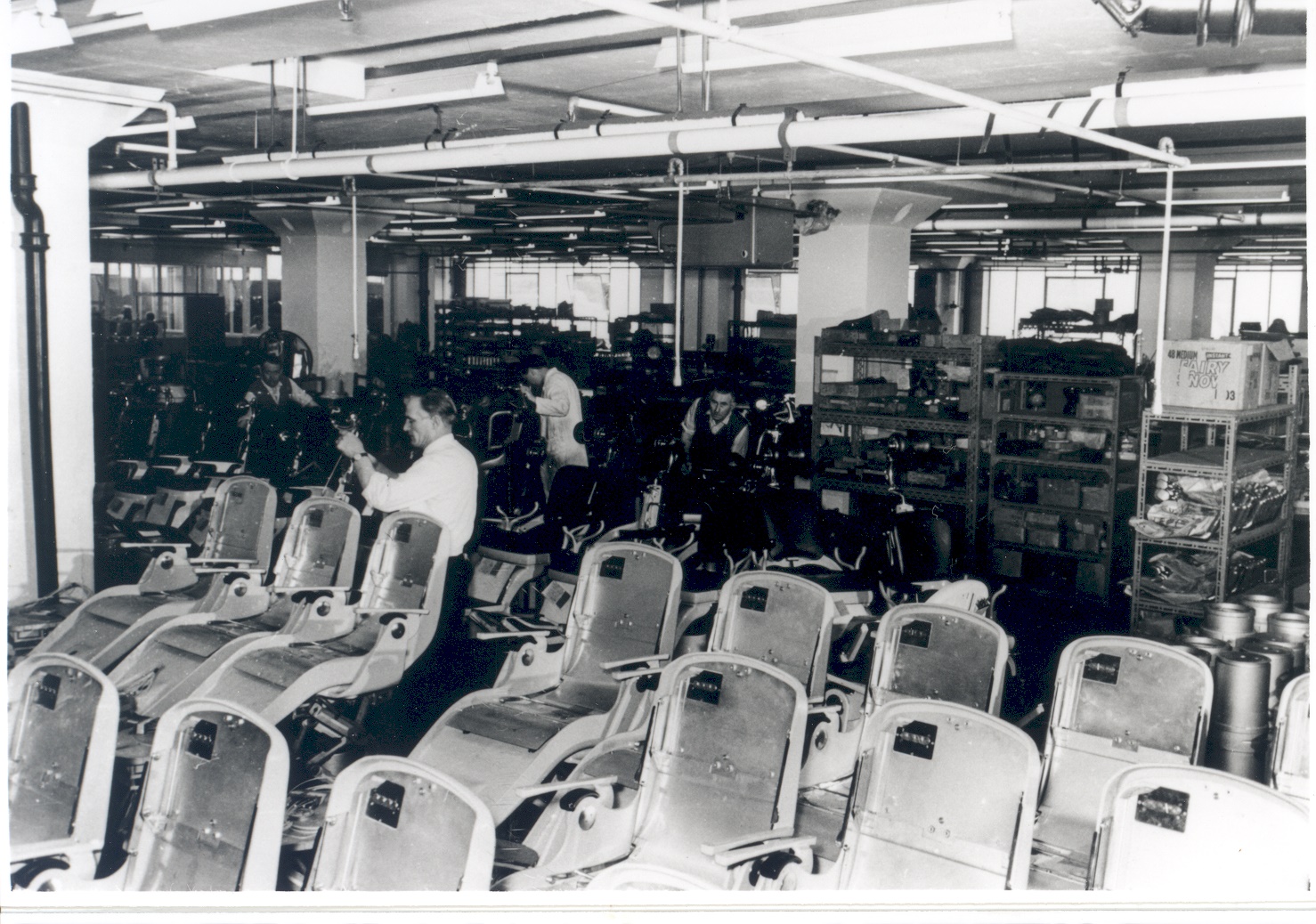 The Outbreak of War

The Wellington Bomber, designed in nearby Weybridge, is considered one of the most versatile war planes ever flown. Parts from the Walton dental factory helped Surrey produce up to 70 Wellington Bombers a month.

Many European dental factories were destroyed during the War. With increased demand and limited supply in Europe, Walton saw a huge increase in dental instrument orders when the war ended.

However, a lack of available workforce and long turnaround times meant that initial orders could not be met and new orders never materialised. To increase income, the decision was made to manufacture larger, more expensive equipment. Chairs, the very item Walton was once famed for, may have been the factory’s downfall. Below are some photographs of Walton-made chairs: a finished 1948 example and a 1967 production line.

The large equipment enterprise was not wholly successful, and in the 1970s the decision was made to close the factory. The gates were closed for the last time in 1981.

It is very interesting to note that dental chairs – from the decadence of the 1920s that gave Churchfield Road its reputation; through to extremely simple, collapsible field chairs helping the war effort; and the swathes of mass-produced 1960s examples – chart the three main periods of the factory’s life.

An interior view of the Claudius Ash Sons & Co. Ltd. works in Churchfield Road, Walton, in 1914. Three men are working machinery. The man in the middle is wearing white overalls.

An interior view of the Claudius Ash Sons & Co. Ltd. works in Churchfield Road, Walton, in 1914. Ten standing men, in overalls, are working in the grinding shop. The grinding equipment worked by belts from the overhead shafts.

An interior view of the Claudius Ash Sons & Co. Ltd. works in Churchfield Road, Walton, in 1914. Several overalled men are working machinery, possibly lathes, in a large area. The machinery is worked by belts from the overhead shafts.

An interior view of the Claudius Ash Sons & Co. Ltd. works in Churchfield Road, Walton, in 1914. Four overalled men are working in the blacksmith's shop, with a further man to the left writing.

The interior of the Amalgamated Dental Factory Works, Walton, c.1967. A woman and four men are working in the Medical Assembly Department.

The interior of the Amalgamated Dental Factory Works, Walton, c.1967. Five men are working in the Paint Spray Department. There are water damped spray booths on the right and on the left infra-red ovens, chain fed. High class stoving and polyurethane paints were used.

The retirement party for George from the Instrument Department at Amalgamated Dental Co. Ltd in Walton, in the 1950s. George is in the centre of the picture, holding a wrapped suitcase with a picture of a dentist's chair, drill and spitton attached.

Electrical drilling machines in the test room at the Amalgamated Dental Co. Ltd in Walton, November 1945. Oscar Muller, who had been part of the Home Guard and then joined the company as an apprentice electrical and mechanical engineer in 1942, is on the left, and Tom Gilbertson is on the right.

The Amalgamated Dental Works, Churchfield Road, from the High Street end of the road in 1983, two years after its closure. The picture shows some factory gates and a 'Danger, Workers crossing, please drive slowly' sign on the wall.

Do you remember Walton's dental factory before it closed? Tell us about your own memories here!
On Wed 25th August 2021 at 15:55, said:

In 1970 I began my indentured apprenticeship under the EITB 5-year training scheme. The first year was at Brooklands Tech followed by Kingston CFE and Poly for the City and Guilds T6. All my memories there have stayed with me as some of the best years of my working life. Being trained in many of the \'shops\' for 3 to 6 months at a time was always so interesting. These included sheet-metal, plating, paint-shop, assembly, capstain lathes, automatic lathes, press-shop, heat-treatment etc. I seem to recall that, as an apprentice we worked through the 73/74 blackouts in the dark cleaning and tidying. The highlight was that i had a rough BMW R60 motorcycle that with the support of all the people in the \'shops\' that I worked in helped to paint, plate, upholster, polish, bead blast it to concours condition. I could not have asked for a better start to working life.

Intrigued to find out more about noteworthy historical industries set up in Walton? Visit our 'Cecil Hepworth: Cinema's Forgotten Pioneer' online exhibition to learn all about the famous film studios and watch some of the original films produced there.

read more
A Century of Brownie Guides Here we celebrate over 100 years of the Brownie Guides, looking at what being a Brownie has meant throughout the organisation's history.

read more
Elmbridge Museum at 30 2021 marked 30 years since Weybridge Museum became 'Elmbridge'. To celebrate, in this exhibition we take a look back at the key personalities, objects and events which have shaped our history since our formation in 1909. Click here to discover our story.