Cecil Hepworth, who lived in Walton-on-Thames, was a key player in the early development of cinema. His work helped to develop filmmaking techniques that are still used today. 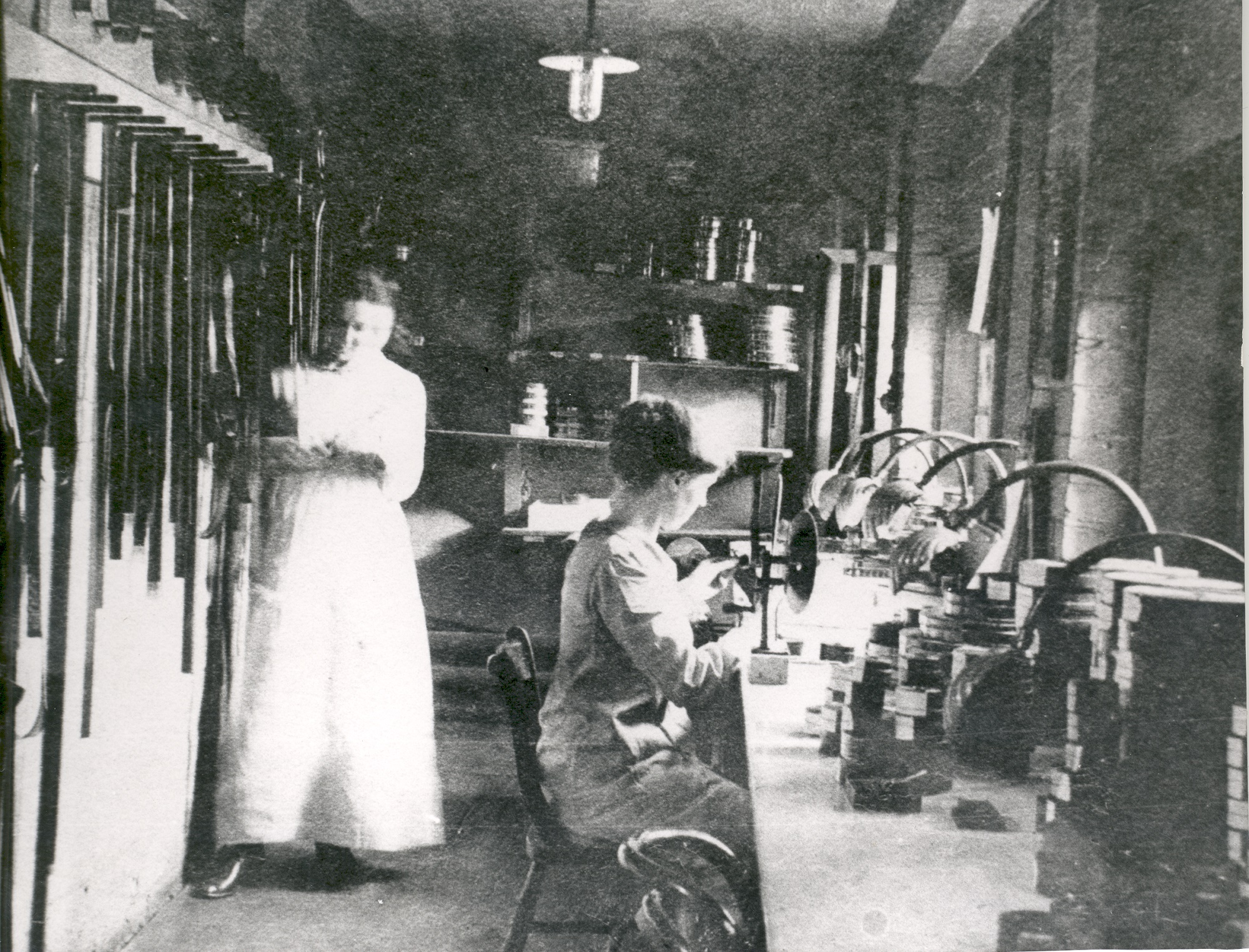 Two women cutting and editing film at the Hepworth Studios. Seated woman on right is Miss Gaiger. They are assembling in order sections of prints which have been printed blue (for night), salmon pink (romantic scenes), amber (sunlit scenes), red (fires or firelight), green (crime) and black and white for "normal".

In 1899, Cecil Hepworth rented a house in Walton-on-Thames for use as a production studio. He was already becoming famous for short comic shock films such as ‘How it Feels to be Runover’ (1900) and ‘Explosion of a Motorcar’ (1901), and it is possible he filmed those near to his studios. The house was in Hurst Grove, a short way from the centre of the village.

Having a film crew in Walton interested a lot of villagers, who were used as extras. The actors would often be outside in costumes and makeup. A local resident J.T. Smith remembered that:

‘They looked horrible. Deep yellow faces with blue around the eyes, thick eyelashes and sometimes a man would be seen with terribly life-like scars on his face’

Local residents also recall a funny incident that happened one day while at Walton Village Hall. A local (unpopular) doctor thought that the dummy that Hepworth was using for a scene had been involved in an accident. The doctor rushed over to help, much to the delight of the gathered crowd.

In 1905, Cecil Hepworth submitted a planning application for another studio to be built. This was to be a photographic studio that would give him more control over the elements and would enable he and his team to film indoors on a set. The application was approved and was the first of three extensions he applied for.

This was the first feature length film of Lewis Carroll’s book, Alice in Wonderland. Cecil Hepworth filmed the film in the gardens of Mount Felix, the manor house in Walton.

For a film made in 1903, the details on the costumes are extraordinary. The playing cards have their own outfits, and Hepworth himself appears in the film as a frog. Hepworth mainly used his family in his early works; and in this film his wife appears as the White Rabbit. When the film was first produced, it was filmed onto negatives. This film was particularly long at 800 metres (roughly 0.15 of a mile), so people could purchase copied sections of the negative if they didn’t want the whole reel. It is now held by the BFI and can be watched in their video here.

The film is full of 'trick shots' and illusions, which were very advanced for the time. The special effects Cecil Hepworth used include Alice falling down the rabbit hole and that Cheshire cat that appears in the tree is a real cat, imposed onto the shot by combining two negatives.

A Shot from Alice In Wonderland 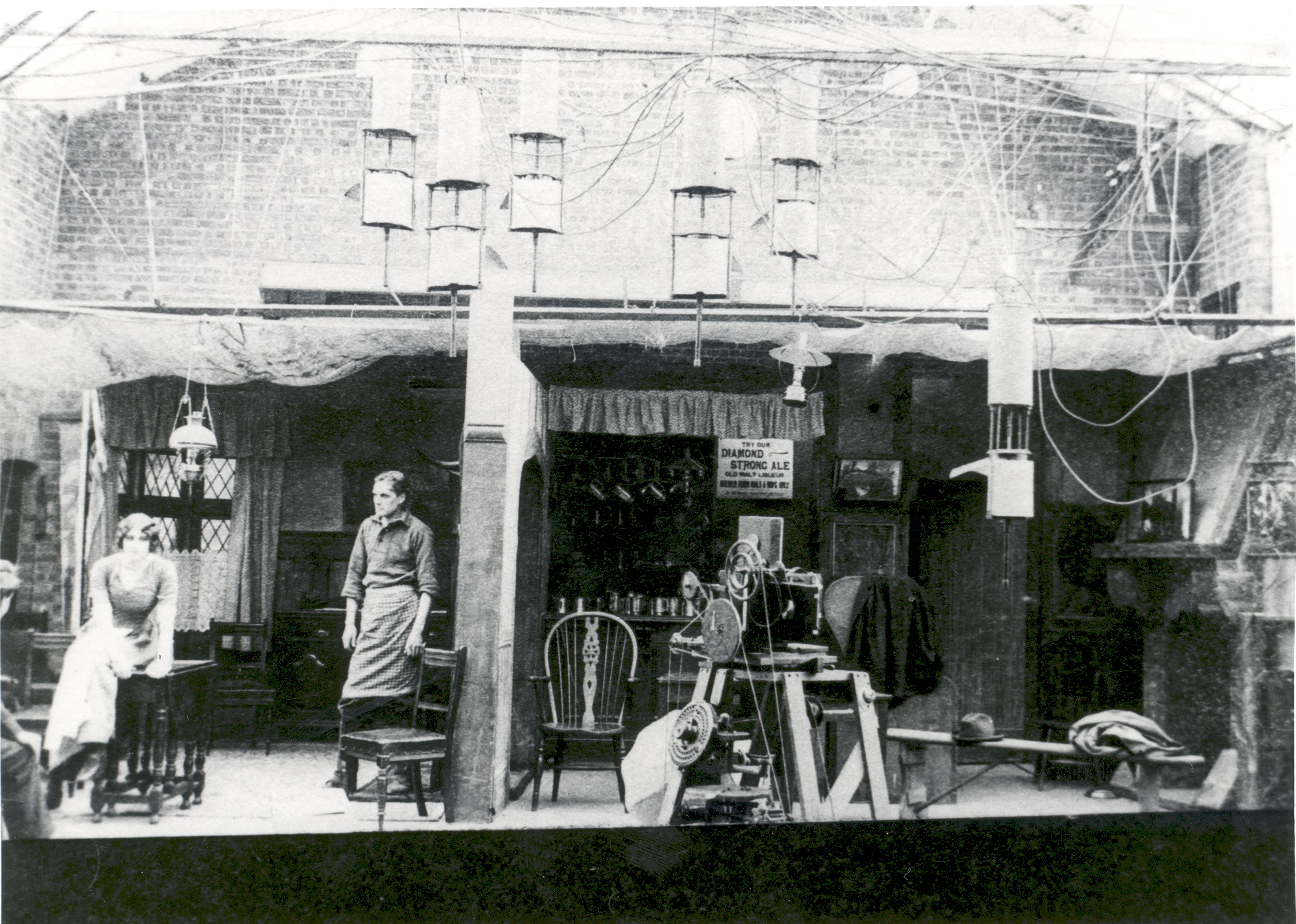 A film set at the Hepworth Studios comprising two rooms with a scene being enacted in the room on the left. The other appears to be a bar in a public house. Studio lighting etc visible in the foreground, 1912.

Situated in Hurst Grove, Walton-on-Thames, Cecil Hepworth used his studio as the central point for all things to do with film. The rented property was rarely used as a home. Instead, the rooms were used as production rooms for developing negatives.

Hepworth once experimented with film processing to see if he could speed up the process. He used Collodion, a chemical combination that includes alcohol and ether. The vapours from the experiment had the same effect as drinking alcohol, which left them feeling rather giddy. This picture (from 1912) shows the inside of Hepworth’s studio. 1912 also saw an application for a proposed garage, toning room and projection room.

Life at the Studios

Cecil Hepworth worked on an invention called a 'vivaphone', an early (if somewhat unsuccessful) attempt to introduce sound into film. The vivaphone played on a gramophone record and the actors mimed along - the trick was to keep the record matching the image (otherwise it would be out of sync) which often made the film funnier than it was intended to be.

1900 A photograph of Cecil Hepworth

1959 The Hepworth Studios after a fire.

c.1940s-50s Black and white photograph of alterations to the inside of the Hepworth film studio.

c.1920s Sketch of Cecil Hepworth's drawing of the first covered studio at Walton-on-Thames.

1959 Black and white photograph of Hepworth Studios after demolition.

1929 The Hepworth film technicians and cast of 'The Silent House' on set.

From the Archive: The Original Studio Plans

Architect's drawing plan of Hepworth's proposed Garage, Toning Room and Projection Room at Hurst Grove, showing elevations at a scale of 1/8 inch and block plan at a scale of 1/16 inch. Signed by Cecil M Hepworth and dated 14/12/1912.

From the Archive: The Original Studio Plans

This short film was one of Cecil Hepworth’s most popular films. It was so popular that the original negatives wore out twice, and 400 copies were sold at £8 each, a large sum of money in 1905. Hepworth’s early films often included his family, and this film featured the family pet dog Blair as Rover.

You can view the restored film in the video opposite.

A Shot from Rescued By Rover

In the story, Rover rescues the family’s kidnapped baby daughter after she is stolen. Blair was probably the first animal film star! What makes this film and Cecil Hepworth both so important is the way Hepworth uses the movement of the camera and editing the negatives to create a story. By using these techniques it helped the audience to follow the story even though there were no words spoken.

This picture shows a still from “The Dog Outwits the Kidnapper”, a sequel to “Rescued by Rover”, produced by Hepworth Studios, Walton, in 1906. Shows “Rover” (the family dog, Blair) is driving the car, with Cecil Hepworth’s daughter, Elizabeth, in the passenger seat. Hepworth played the kidnapper in this film.

scene from a Hepworth film, "They Called Him Coward", showing a group of men standing around one man seated at a desk.

Still from the film "Tansy", depicting a man with a moustache and wearing a cap, with a woman cowering away from him. Directed by Cecil Hepworth and starring Alma Taylor, Gerald Ames and James Carew, the film was based on a popular rural novel of the time by Tickner Edwardes, and was filmed largely on location on the Sussex Downs.

Still from the film "Tansy", 1921, depicting two men who are grappling with each other and a woman trying to restrain one of the men. Directed by Cecil Hepworth and starring Alma Taylor, Gerald Ames and James Carew, the film was based on a popular rural novel of the time by Tickner Edwardes, and was filmed largely on location on the Sussex Downs.

Still from the film "A Temporary Vagabond", depicting a man and woman seated at a table and a further man standing to right. The film was directed by Henry Edwards from an original story by Stuart Woodley for the Hepworth Picture Plays production company.

Still from the film "Comin' Thro' the Rye", depicting a man, Shayle Gardner, and two women - Alma Taylor to the left of the image - in crinolines in a formal garden setting. The film, based on the novel of the same name by Helen Mathers, and directed by Cecil Hepworth, starred Alma Taylor, Shayle Gardner, Ralph Forbes, James Carew and Eileen Dennes.

Still from the film "Strangling Threads", depicting Mary Dibley pointing a finger at James Carew with a lake in the background. The film starred Mary Dibley, Gerald Ames' wife, and James Carew, and was directed by Cecil Hepworth.

Still from the Hepworth film "Simple Simon", with Henry Edwards, Chrissie White and Mary Brough in a wedding scene.

Cecil Hepworth also shot real life footage, and one extremely important film he took was of Queen Victoria’s funeral in 1901. This was an event of national and international significance, and represented an opportunity to demonstrate how modern technology and communication were evolving.

You can watch original footage of Queen Victoria’s funeral in the video opposite, made by British Pathe.

The borough of Elmbridge had its own connections to Queen Victoria, who frequently visited Claremont House. Hepworth filmed the procession with a camera of his own invention, which although movable, was very loud. It was loud enough make the future King Edward VII halt, and there is a moment in the footage where he looks directly at the camera. These early films offer valuable insights into historical events such as this, and it is because of Cecil Hepworth that we can see such an event unfold.

1923 Black and white photograph, with white border, showing Elizabeth Hepworth and four others standing in the sea. All five people, two girls, an older woman and two boys, stand in a row. Believed to have been taken by Cecil Hepworth.

c.1910-20 Cecil Hepworth is seated in a field or on a river bank. With him are four children - 2 boys and 2 girls - and two women. The two boys are holding model yachts.

1914-18 Photograph of Cecil Hepworth in the uniform of a Motor Volunteer during the First World War.

1923 Five people, including Cecil Hepworth (far right) standing on a beach. Three of the other people identified are Tom Hepworth, Alma Taylor and Margaret Hepworth. They are all wear bathing costumes and stand at the waters edge. 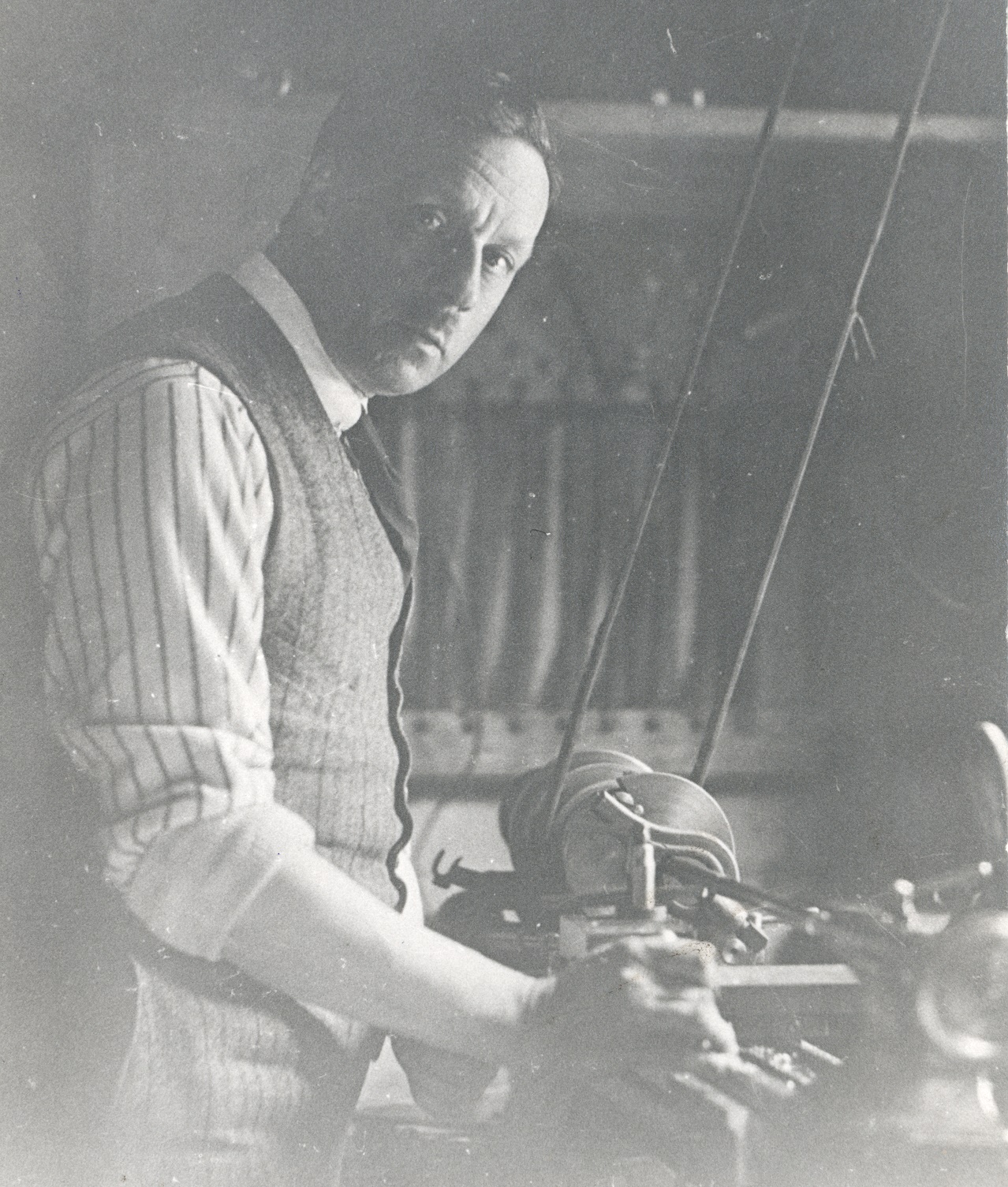 Cecil Hepworth was an inventor who was not afraid to experiment with film and to deliver the unexpected. His contribution to filmmaking is still evident today. Rescued by Rover uses panning shots to follow Rover’s progress on screen, something that an audience will expect to see to help tell the story even when watching an ordinary television programme.

Typescript of Memories of Miss Wing and Mrs Hyman

Typescript of the Memoirs of Mr Stanley Faithfull, March 1973

Intrigued to learn more about famous Elmbridge people? Take a look at our People of Elmbridge online exhibition, in which we explore more famous faces across the worlds of showbusiness, royalty, sport and much more!

Take a look at some of these handy resources to learn more aboout Cecil Hepworth and his film legacy.

Let us know your thoughts on the history of film in Walton here!

The Wrens of Oxshott We revisit the remarkable lives and works of Denise and Rosemary Wren - hugely significant mother and daughter potters who lived and worked in Oxshott. Their works are both famous and trail-blazing in the world of pottery and women's history.

read more
Young Victorians: Childhood in Elmbridge 1837-1901 Childhood in Elmbridge has changed radically since Queen Victoria's reign ended in 1901. However, the themes of home life, education, and play have remained timeless. Here, we assess the changes and continuities within the lives of local children over more than 100 years.

read more
Roman Cobham In 1942, the remains of a Roman bath house were discovered at Chatley Farm, on the outskirts of Cobham. In this exhibition we explore local Roman life, work, culture and practices.