Animals, aside from being useful commodities to some, have also always fascinated us. In some cultures, various animal species are considered holy. From the earliest cave paintings to the most up-to-date contemporary art, the depiction of animals and what they mean to humans and society has always been a mainstay of visual culture.

The branch of science concerned with classification, especially of organisms; systematics.

The art of preparing, stuffing and mounting the skins of animals with lifelike effect. In Greek, ‘Taxis’ means arrangement and ‘Derma’ means skin.

Someone who practises taxidermy. 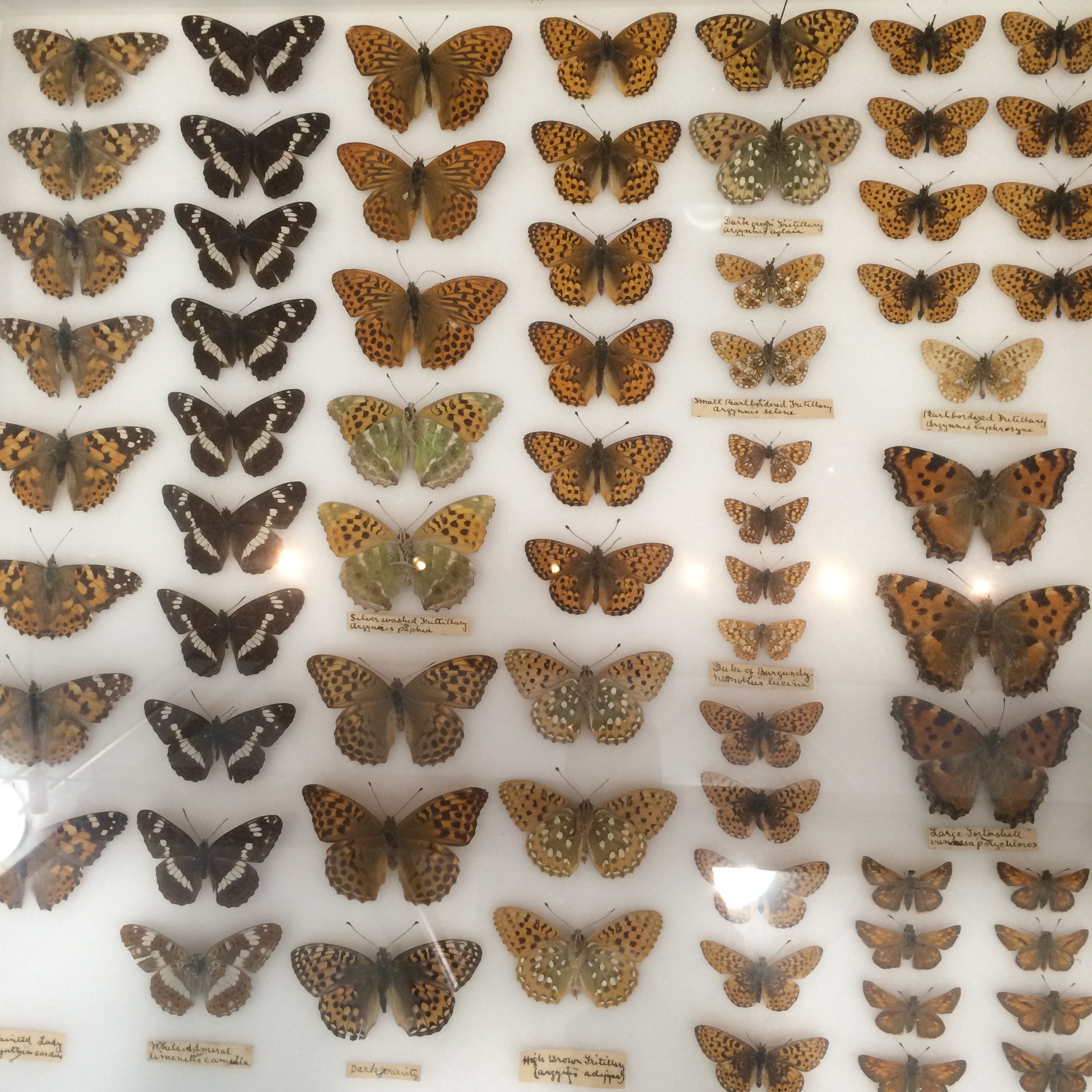 The history of preserving the natural world is an old one: mummification is one of the oldest forms of preservation. From the 16th century onwards, wunderkammer – ‘cabinets of curiosities’, rooms full of exotic and wonderful artifacts – were constructed by wealthy individuals to display their knowledge of – and power over – the world. Although the boundaries of classification would be imposed later, the cabinets included natural history objects (both real and fake), archaeological finds, and historical relics. The contents of some of these cabinets informed museum collections around the world.

With the 18th and 19th century’s investigations into natural science, individuals became obsessed with natural history. The display of nature was not limited to the museum; naturalists would mount displays in their homes or on their person in the form of hats and skins.

This online exhibition explores some timeless themes relating to animals through objects from the Elmbridge Museum collections. Starting from beautifully mounted butterflies, a practice that categorises nature, a dual narrative can be formed – one leading into the museum, the other into the home. ‘British Butterflies’ by William Coleman. From a collection of five butterfly and moth reference books owned by Edward James Smith, a Claygate collector.

Noah, and his mission of gathering pairs of animals, has been credited with being the first attempt to fully categorise the natural world. Stemming from this first instance, ideas of classification and identification have continued.

Butterfly collecting was much more popular in Britain during the nineteenth and twentieth centuries than it is now. However, it still remains a fashionable hobby in other parts of the world such as Japan. The Large Tortoiseshell butterfly was a common species until the 1940s, but there have been hardly any sightings since 1953 and it was declared extinct in the 1980s. Common domestic hobbies, such as butterfly collecting and mounting, illustrate tendencies that can be traced back to Noah and his ark but the stark realisation that such plentiful creatures – ones that hobbyists once brought into their homes – are now extinct, is jarring.

The relationship between practices such as butterfly collecting and flower pressing are interesting because they were informed by traditional museum practices, but they also informed them in return.

In the archive, Elmbridge Museum has box upon box, carefully stacked and encased in protective wrapping.  Take a peek inside them, and you will find rows of meticulously arranged butterflies, from tiny Common Blues to larger Red Admirals. More than 100 years ago, Claygate local Edward J. Smith collected each and every one of these specimens from our local area, painstakingly arranging them by hand into the beautiful array that we can still see today.

Come Fly With Me

Birds in the Collection

Unlike the sad case of the Large Tortoiseshell butterfly, not all animals struggle against the expansion of human interaction into traditional natural habitats; the kestrel is an example of one such animal. Kestrel numbers have remained steady despite large expansions of towns and cities into green spaces. Kestrels can often be seen hovering over motorways or perched atop electricity pylons.

Other birds have been less fortunate. The hen harrier, native to many parts of the UK, is one of the country’s most persecuted birds of prey. Hen harriers are targeted because they reduce the number of grouse available to shoot – they have become victims of a very modern conflict between man and animal.

Hundreds of years ago, Elmbridge was home to numerous species of uncommon birds, and contained a treasure trove of different flying insects. The Lapwing, a wetland bird which makes its nest on the ground, is incredibly rare because of its susceptibility to predators.

The displays below are typical full-body cabinet displays of taxidermy, where the whole animal is preserved and arranged in a natural pose.

This Noah’s Ark, because it is a toy, is located squarely in the home environment but with animals that, in 1910, would have been seen as ‘exotic’. The opening of London Zoo in 1828 started a craze for depicting ‘exotic’ animals in toys and illustrated books; Montgomery the Monkey shows us this was true in the local area. London Zoo also gave us, in the form of an incredibly large elephant, the term ‘jumbo’ that is still in use to this day. Museums and the Home

The process of taxidermy, in this exhibition at least, holds a strange place that straddles both the extraordinary and the banal. Kestrels, for example, are very common birds, yet the Maltese Terrier, through its royal provenance, is a one off specimen. Pets are one way in which animals have been bought into the domestic setting; however, by mounting it in an elaborate way under a dome, the Duchess of Wellington’s terrier looks more like a museum artefact.

The final objects in this exhibition illustrate the conclusion of the two narratives that have been running from the mounted butterflies through to now: one toward the domestic, the other toward the museum.

The mounted birds from further up the page provide fine examples of traditional museum displays of taxidermy.

Juxtaposing a mounted bird with a children’s toy of the same animal exhibits a modern tendency to invite animal imagery into the home while distancing ourselves from the real thing. The most troubling aspect of this relationship is the fact that the toy chicken is caged. The chicken coop, just like the glass fronted taxidermy and butterfly cases, shows how humans have always (and probably always will) pen animals, whether in categories of classification or cages.

Maltese Terrier This Maltese Terrier was owned by Elizabeth Wellesley, the Duchess of Wellington, who lived at Burhill House in Hersham from 1887 until 1904. She bred Maltese Terriers and this little one was her favourite. After it was sadly killed in a coach accident, it was mounted by Queen Victoria's ornithologist John Leadbeater in the 1800s, so that the Duchess could always remember it.

Teddy Bear This stuffed toy teddy bear dates back to 1905, and originally belonged to the donor's sibling during childhood. It has a moveable head, arms and legs, covered in sandy-coloured fur fabric and boot-button eyes. The teddy also wears a dark green velvet bolero with yellow and red silk braiding, and black velvet trousers with elastic in the waist.

Chicken Coop This wooden hen coop toy dates to around 1900. When the barred and hinged gate is opened, the paper mache chicken with a tail of red and brown feathers springs out on a piece of wood which is contained inside the coop.

Inspired to find out more about local wildlife?

Take a look at our handy guide to historic birds in our borough!

Discover more prominent animals in Elmbridge's past in our A Day at the Races online exhibition, where we delve into the eventful history of Sandown and Hurst Park racecourses, from the first races, over hurdles and ending in the present day.

Go to the A Day at the Races online exhibition

Interested in finding out more about animal depictions in historic art? Take a look at our Wrens of Oxshott online exhibition Find out why taxidermy is still valuable on the Natural History Museum's website Learn about how the Victorians made pets popular in this article from the Guardian

Young Victorians: Childhood in Elmbridge 1837-1901 Childhood in Elmbridge has changed radically since Queen Victoria's reign ended in 1901. However, the themes of home life, education, and play have remained timeless. Here, we assess the changes and continuities within the lives of local children over more than 100 years.

read more
100 Years of Remembrance Have you ever worn a paper poppy on Remembrance Day? Or taken part in a 2 minute silence? The Royal British Legion has remembered fallen war veterans in this way since 1921. In this collaborative exhibition to mark a century since its formation, Year 8 and 9 students from Hinchley Wood Secondary School have used historic items from our collection to reflect on what remembrance means to them.

read more
Pulling Teeth: Walton's Dental History We're diving into Walton-on-Thames' dental past, examining dental tools made at Walton's famous factory and tracking the changes to a practice which terrifies many.